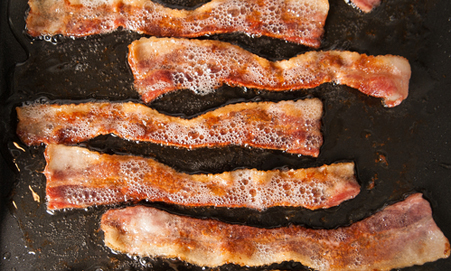 Earlier this month, the condiment company J&D’s (“Everything should taste like bacon”) released—and quickly sold out of—a line of bacon condoms. The product is now only available by waiting list, and if you don’t believe that artificially-flavored latex prophylactics would sell, see for yourself.

Not surprisingly, J&D’s is a half-Jewish enterprise, the Jewish half being Dave Lefkow. In an interview, Lefkow said that he thought it would be funny to get J&D’s seminal product, Bacon Salt, kosher certified (it contains no actual bacon).

Traif is a hip(ster) restaurant in Brooklyn whose executive chef is, no surprise, a Jew—and whose tag line is “Celebrating pork, shellfish & globally inspired soul food.” The late David Rakoff wrote about his experience of eating pork in Germany, which made him feel very aware of his own Jewishness. Luzer Twersky, a former Satmar who left his Hasidic community (and may soon star in a reality show about it), told the New York Post, “When I had the first bite, I felt angry…I felt how could my parents keep this from me?”

Bacon is more than a pig product. It’s a cultural statement. The fetish, the joke, and the irony justify consuming bacon, though it is fattier than fat, and the trayfiest of trayf. Did the Post ask an ex-Hasid about an innocuous non-kosher food like Starburst Fruit Chews or Jell-O? No. Because who cares about Starburst Fruit Chews and Jell-o? They went right to the bacon. Bacon carries cultural currency.

As an observant Jew, here’s what bacon represents to me: If you’re Jewish, even if you’re a secular Jew, eating bacon is saying, ‘I am Jewish, but I think I am refuting my Jewishness by eating trayf in public, so therefore I am totally affirming my Jewishness.’

I myself am stringently, stubbornly kosher. When it comes to bacon, though, I’m an outsider. I didn’t grow up kosher, so I’ve tasted it—and I think it’s gross. I’ve thought it was gross since way before I even considered going kosher. Smelling it as I walk by the bodega every morning makes me nauseous. I usually hold my nose past the coffee carts selling egg and bacon sandwiches on my way to work. My worst nightmare is to be feeling a little sick on a warm, poorly-ventilated, rocking subway car only to have some pork eater get on the car eating a bacon-and-egg sandwich. I feel like puking into my messenger bag. (I actually carry barf bags with me in case of this very situation.)

The weird resurgence of bacon in the past five years as an object of culinary fetish seems to me to be a direct reaction to increased awareness of healthy food (Skinny Bitch, Fast Food Nation, et al.), and also to what is basically the emergence of the second wave of American baalei teshuva (the first being in the 1960’s). Suddenly every dudebro and his “ironic” hipster cousin are indulging in bacon as a statement.

That statement is a lot like that of the “bad kids” I went to high school with, the most obnoxious of whom used to sing in the halls to his Rage Against the Machine tape on his walkman, “F*ck you, I won’t do what you tell me.” Except he totally did what people told him. He’s for sure making more money now than I am—and playing a lot of golf. (I know that because of Facebook.)

At Pardes, Brooklyn’s boundary-breaking gourmet kosher restaurant famous for its unlikely combinations of flavors, the chef occasionally makes beef “bacon” ice cream. Pushing the porcine flavor of bacon in the already revolting medium of parve ice cream has to be done to make a point (because there is no way it could be done for flavor). The point is, as Dr. Evil said in Austin Powers, “I’m with it…I’m hip.”

I don’t really care what other people eat, as long as they don’t strap me to a chair, hold my nose, and shove their nasty food in my mouth. But the Jews and bacon shtick—and it is completely shtick—it’s a fetish. It’s a symbol. If Jews want to eat bacon in private because they have a compulsion for it, that’s none of my business.

But Jew fools himself if he eats bacon. No matter what he eats, if he two-fists bacon-wrapped scallops covered in mayonnaise on white bread and washes it down with a glass of milk while kneeling down to idols, he will always be Jewish. In that case, why not give the Jewish soul what it actually wants: kosher food.

From this author: It’s Hard to Be a Mensch at a Crowded Kosher Supermarket on Thursday Night