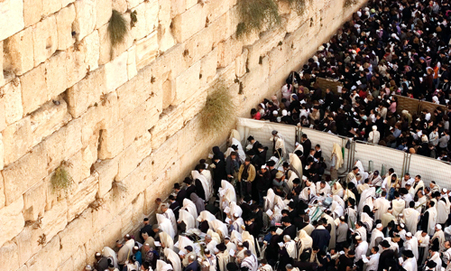 It’s not just on gender segregated buses that travel through ultra-Orthodox areas of Jerusalem or at the Western Wall where Women of the Wall continue to challenge the authorities over communal prayer on the ladies’ side of the partition—women’s access to communal space in Israel is limited in other settings as well. In a post for the Times of Israel, Rivkah Lambert Adler lists the ways that she, as an Orthodox woman, has encountered discrimination at synagogue classes, lectures, and even concerts where her ticket price is the same as a man’s but her seat is way worse.

I was nodding pretty vigorously as I read her post—it’s hard to disagree with Adler when she argues that she should be able to see the performer in a show she paid good money to see—until I got to this paragraph:

Please don’t misunderstand me. I’m not suggesting that I want to wear tefillin or serve as a ba’al tefilla or be called up to the Torah for an aliyah. I’m not inherently opposed to separate seating during services. Please don’t conflate and thereby dismiss what I’m saying because my point is based on gender. I’m not revealing my disdain for being a Jewish woman and I have no secret desire to be a Jewish man.

Adler is worried about coming off as a ranting feminist (heaven forfend!) when all she’s asking for is a fair seat. So she reassures readers that she doesn’t actually want many of the things that Jewish feminists want—such as participation in public ritual.

This was wholly unnecessary. She had already made a pretty convincing case for more equitable use of public space. There was no need to bring the aspirations and goals of other Jewish feminists into the mix and imply there was something wrong with them, that they were somehow radical and improper. She could’ve rested her argument on “kavod habriyot,” simple respect for others.

Part of this is defensive. In high school, I encountered several teachers with the audacity to use the F-word—feminism—to disparage women who wished for leadership and ritual participation as wanting “to be Jewish men” instead of the Jewish uteruses, er, women, we were created to be. I wasn’t quite savvy enough to challenge the rabbis’ basic premise—that leadership and tefillin were somehow intrinsically bundled up in masculinity.

Another tactic frequently used to discredit Jewish feminists is to impugn their motives. “Do they even want to be counted in a minyan?” one teacher asked, “or are they simply insisting on it because men can be counted?” The problem here, according to these teachers, is that these women don’t want to perform the mitzvah for its own sake, but are merely trying to prove a point. This is the classic privileged argument. When you’re part of the ruling class, you never have to explain yourself. A man who walks into a shul and asks for an aliyah never has to explain why he wants it. As a Jewish male over the age of thirteen, it’s merely his right and privilege. His motives are irrelevant.

Adler clearly was hoping to head off the type of mocking I heard as a teen, convincing her would-be critics that what she’s asking for isn’t a big deal. A nice chair here, a better view there—nothing like those crazy feminists we’ve all been warned about. While I understand the strategy, I wonder how effective it is. Is it useful to downplay the work of other feminists in an attempt to distinguish yourself from them?

She may not give the benefit of the doubt to those women who supposedly wish to be men, but she gives it to the people who keep giving her shitty seats. “I’d like to assume it’s a problem of oversight rather than intentionality,” she writes.

I have no problem with that. I also don’t like to make assumptions about people’s intentions and personal motivations unless I have actual proof of what they think and feel. And it’s likely true that the organizers have no special animus towards women. But to call it a simple “oversight” is shockingly naïve when it continually happens and to just one group and all the time. This points to a more systemic cause. And in invoking the “derech eretz” argument over and over, Adler is clearly trying to avoid having that more difficult conversation.

It’s her approach, however, that irks me. It’s true that social change takes time and happens incrementally. Martin Luther King, Jr. famously said, “The arc of the moral universe is long but it bends towards justice.” But do we get there by asking for pittances and disparaging those that dare to ask for more?

As someone who has chosen to leave the Orthodox community, I recognize that my credibility is pretty much shot with those who still claim communal membership. (Part of the reason I lingered on the fringes of Orthodoxy for awhile was to keep some of that credibility. Ultimately, I decided it wasn’t worth it.) I don’t really have a right to tell an Orthodox woman still functioning within that community what she should demand and how she should go about getting it. She and I face somewhat different challenges and restrictions when it comes to misogyny. Nor do I have the right to tell Orthodox women how I think they should feel—angry, frustrated, revolutionary—about their present situation.

But I also don’t think that Orthodox women, in making their case for greater respect within their own communities, should disparage the aspirations of other Jewish feminists who want greater ritual participation. This desire doesn’t make them Jewish men, but rather, committed Jews.

As for Adler—may she get those front row seats she’s after. I just hope she doesn’t stop there.