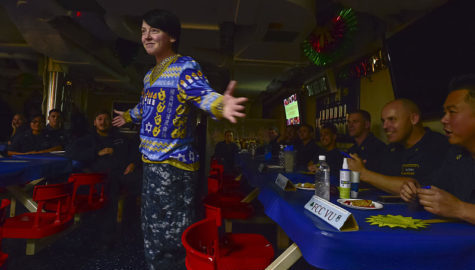 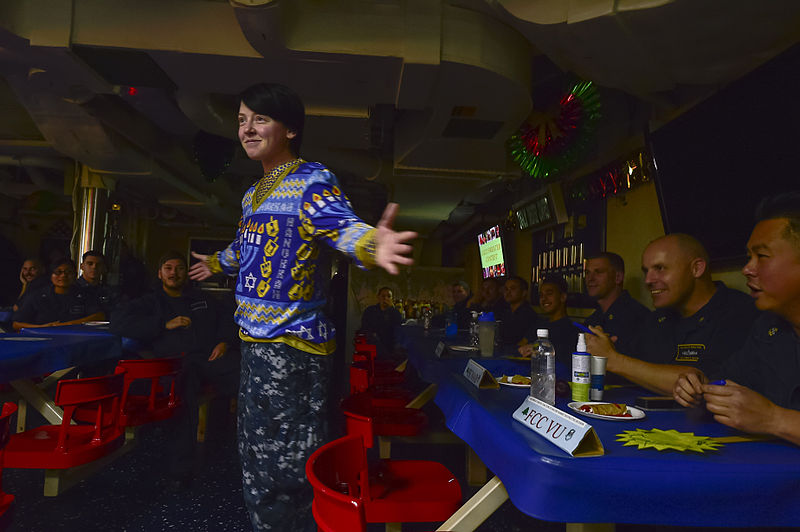 Chevrei, kinderlach, we have a new Jewish crisis on our hands. It’s not something you’d hear about in the lame-stream Jewish media, nor does it pertain to Israel or successfully producing Jewish babies. The latest infamous Pew Study, in all its wisdom, did not see fit to explore this important issue.

I am talking, of course, about ugly Chanukah sweaters.

If by some new miracle of Chanukah, you don’t know what I’m talking about, you know those really ugly patterned sweaters gentiles love breaking out come December? You can procure your own, with the designs altered to evoke symbols of Chanukah, e.g., lots of blues, Jewish stars, text with Chanukah puns.

And I am here to tell you the time has come to stop.

This isn’t an argument against assimilation, or even on accepting Christmas traditions, up to a point (looking at you, Menorah tree). After all, I’d be a hypocrite if I said it was all culturally off-limits and then proceeded to accept presents from loved ones, since that’s largely a modern rite that arose out of Christmas-envy (American Christian hegemony strikes again!). No, this is a plea that in good taste, please do not wear ugly Chanukah sweaters. No fake ties, no cable-knit Jewish stars. And why not?

Here’s a hint: If a product has ugly in the title, you might want to think about displaying it on your person.

Listen, when this phase started circa 2012, it was cute. You wore one to a party, and you were the only one there doing so, and everyone thought it was just hilarious. Maybe it was even a joke at the expense of Christian hegemony, and mainstream corporitization of a pagan-cum-Christian festival that has become a cultural and financial force that affects the entire country as some sort of jolly reflex rather than an expression of one particular culture! Wow, that was clever of you!

But it’s 2016, and ugly Chanukah sweaters have become ubiquitous. They literally sell them at Target. It’s no longer clear where the joke ends and Christian mimicry begins.

Dov Charney himself has told us that the era of the hipster is past. We can once again do things with sincerity, and are no longer bound by ironic intention.

Guys, you remember that Christmas sweaters and kitsch is ugly, right? It’s an amalgam of various European holiday traditions blended together into a milquetoast paste of bad fruitcakes and cheap tinsel. We are blessed to not have to do that to Chanukah. Why shoulder someone else’s burden? Have we seen so much of it that we’ve grown accustomed to the awfulness, so inured that we think it’s a good idea to take up the mantle of dreck ourselves?

Don’t wear these sweaters as a joke. It makes Chanukah a joke. Want to wear a blue dress covered with Jewish stars and glitter? Go forth (to Etsy, for example) and celebrate. But be sure to face a mirror and ask yourself, “Do I like the way I look?”

If you can really, really say yes, then wear your “Happy Llamakah” shirt with my blessing. But you may have to face the fact that whatever joke this once communicated is no longer worth it. It’s time to move on. Our own culture has plenty of questionable holiday traditions (even latkes are contentious). Start there, and chag sameach.

Image: An entry to an Ugly Holidays Sweater contest aboard a U.S. guided-missile destroyer USS Gridley. Not even the Navy is safe. Via Wikimedia.