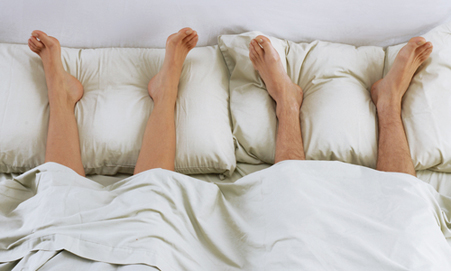 It’s certainly been an exciting week for Jewish genitalia. First, we saw nightmares come to life when an Israeli man, sitting on the toilet at his parents’ house, had his penis unexpectedly bitten by a snake. Now, the first-ever kosher lubricant was approved by the Rabbinical Council of California, and you know you’ve always wanted those guys involved in your sexual choices.

All thanks go to Trigg Laboratories, I suppose. The company’s line of Wet products was “created to meet the highest industry standards,”—but apparently they wanted to answer to an even higher standard, too.

“The ‘K’ imprint on our packages says that we maintain the highest standards of purity and answer to a higher authority,” spokesman Dean Draznin said.

It might not be such terrible idea, either. The Atlantic points out that given Israel’s high fertility rate, and Tel Aviv’s 2011 status as “World’s Best Gay City,” this could actually be a very profitable move for the company:

And Wet happens to be a popular product in the gay community, having been ranked by various publications as some of the best, safest and most popular among gay men. Kosher certification could be a plus for gay Jewish men and perhaps foster brand loyalty among those who already use it.

Kosher lube, however, might not be necessary in the eyes of Jewish law—or Jewish consumers—according to JTA. Menachem Lubinsky, president of a company conveniently named Lubicom, hasn’t seen a demand for kosher sex products at its annual Kosherfest trade show.

“I’m not aware of any large demand for this. I’m more aware of people looking for kosher-for-Passover dog food. Having said that, there’s been a trend in recent years to make more over-the-counter drugs and cosmetics with certification for people that don’t want to bring anything into the house that isn’t kosher certified.”

To each his own.

Modern Orthodox Jews: We Need to Have a Serious Conversation About Sex

Dr. Ruth Promises You Good Sex if You Go to the Israel Day Parade