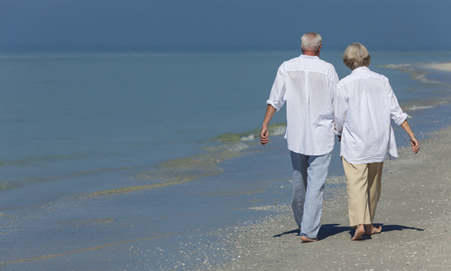 There’s a reason that US News and World Report named the Hebrew Home at Riverdale one of the best nursing homes in the country. While the rankings are said to be based on “quality indicators, staffing ratios and annual survey inspections,” it’s clear those barometers are just fancy, bureaucratic talk. Let’s be real—it’s about the sex.

The Hebrew Home, which opened its sexually liberated doors in 1917, has a policy to encourage intimacy among its residents, Bloomberg reports:

In 1995, the home adopted a four-page policy — considered the first of its kind — stating that residents “have the right to seek out and engage in sexual expression,” including “words, gestures, movements or activities which appear motivated by the desire for sexual gratification.”

Pop culture promotes an image in which our sexual desires expire just as our hands begin to wrinkle. Luckily, this is not the case. While the frequency of sexual intercourse may decrease with age, the craving certainly does not. And the Hebrew Home works to ensure that its residents’ desires aren’t stifled because of a lack of privacy or the concerns of family members. They do, however, monitor each relationship in order to prevent a situation where the intimacy is unhealthy or unrequited.

For instance, disruptions in eating, sleeping or bathroom patterns could prompt a nurse to ask a resident whether she or he is unhappy in a relationship. Where a relationship seems unwanted, the home can take steps to help end it, from counseling an overly aggressive resident to moving one to a different floor.

Evelyn Tenenbaum, a professor at Albany Law School who’s written about sex at nursing homes, thinks that other nursing homes should follow the Hebrew Home’s lead.

She wrote in the Indiana Law Review that elderly care facilities could provide “do not disturb” signs; set policies to discourage the spread of sexually transmitted diseases; make condoms, vaginal lubricants and Viagra readily available; and provide beauty salons and other cosmetic services to help residents feel physically and sexually attractive.

Like Springsteen said, put your makeup on, fix your hair up pretty, and meet me tonight at the Hebrew Home at Riverdale.