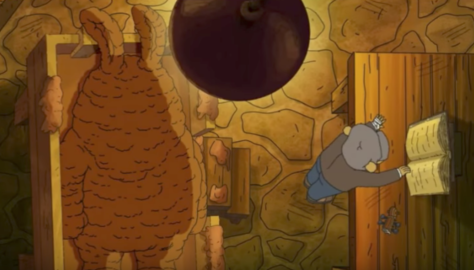 You may have stopped watching Arthur (about the shenanigans of an anthropomorphized aardvark and his friends,) on PBS ten or fifteen years ago, but the show is still chugging along, with new episodes. Earlier this week, this year’s Halloween special, “Arthur and the Haunted Treehouse” debuted.

Any fan of Arthur, old or new, will tell you that Arthur’s friend Francine Frensky (some kind of a monkey, in theory, but she looks more like a hippo, TBH) is Jewish, so she brings us a very Jewish spooky story this episode. Of course, that story is the Golem. The dybbuk might be a bit much for kids.

Francine is trick-or-treating in her apartment building, when she knocks on the door of an elderly woman with a vague European accent who invites her inside.

Anyway, the woman shows Francine a photo of a golem she says she took herself, and begins to tell her the story of how she came upon it, back in her childhood home of Mindelplotz (near Prague, apparently).

The story that follows, is sadly divorced from Jewishness, more a Frankenstein’s monster sort of scenario. In the tale, a violinist who is bitter after breaking his hands studies “magic,” which apparently includes looking at a book with pictures of ankhs and a kabbalistic Tree of Life. He constructs a golem (that has adorable bunny ears!!), and then activates it by sticking in a shard of his violin. The golem goes on a rampage and terrorizes the town! It turns out that the old lady telling Francine the story is the ghost of the long-lost sister of the actual apartment resident (Mr. Saperstein, also a goat-person), and a victim of the Golem!

Anyway, it’s not the most faithful telling of a golem narrative, and nowhere does anyone even say the word “Jewish,” but points for Halloween diversity!

And, yes, you can watch this on YouTube. The whole segment is less than ten minutes: