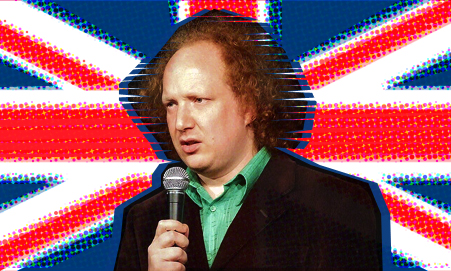 If Krusty the Klown had grown up in in Kent, England and studied Classics at Oxford, he might have become Andy Zaltzman. A politically conscious Jewish comedian whose most distinctive features are his wild fringe of orange hair and an obsession with puns, Zaltzman is one half of The Bugle, a comedy podcast that he created with fellow Brit John Oliver in 2007. Bearing the tagline “Audio Newspaper for a Visual World,” The Bugle is not only hilarious, it’s also a perfect antidote to the dull pablum of corporate television news. With weekly episodes running as long as 45 minutes, The Bugle is lively, weird, and fantastically droll. Often it feels like a more freewheeling, smarter version of The Daily Show, for which John Oliver is a writer and a featured correspondent.

Oliver’s profile in the United States has surged over the last couple years; besides his Daily Show work, he’s hosted standup specials for Comedy Central and appeared regularly on Community and in The Smurfs movie. Oliver’s busy schedule—and his home being in New York—makes it all the more impressive that he has stuck with Zaltzman, who continues to grind out a living doing standup, earning occasional TV credits, and writing a blog for ESPNcricinfo, a cricket website owned by ESPN.

But besides showing loyalty to an old friend, perhaps Oliver simply understands that Zaltzman is a brilliant comedian, one who distinguishes himself by his ability to mix low-brow, groaning humor with scabrous political satire. It also doesn’t hurt that despite the transatlantic divide between the hosts, the show remains incredibly popular, with listeners in 145-odd countries and, in 2011, an average of two million downloads per month.

Although The Bugle takes on world news—Oliver and Zaltzman take particular delight in going after the bloated pageantry of dictators like North Korea’s Kim Jong Un—it’s often at its best when skewering Anglo-American pieties. During the Olympics, Zaltzman filed near daily “micro-Bugles,” which formed a kind of alternative history to the host country’s displays of Queen-and-country empire-lite pride (“A grand effort all round by London. Just 346 years after it burned to the ground, this city has truly bounced back”)

But the pair are as well versed in American politics as those of their native England, and their episode on the LIBOR banking scandal is essential listening for its explanatory value alone. Zaltzman published a book of satire early in the 2008 financial crisis, called Does Anything Eat Bankers? which fielded financial questions from dogs and used a parable of Jesus feeding the hungry with fish fingers to explain the concept of credit. The comedian’s politics are of the left but he’s contemptuous towards any sort of party politics. He’s said that officials have been engaged in “elongated game of economic pin-the-tail-on-the-donkey” and called the US presidential election a “multi-billion-dollar squawking contest.”

But Zaltzman is a far more entertaining figure on radio (he also appears on the BBC Radio show “Tonight With Rory Bremmer”), where he’s better served by his relentless streams of cheap puns (five solid minutes is his record) and his swift back-and-forth with Oliver. The two bring out the best in one another—when together, Oliver moderates his Daily Show persona’s short temper, which has always mistaken loudness for cleverness; and Zaltzman can lean on a partner who gets his policy references and shares his gleefully self-hating attitude towards all things British.

The Bugle recently marked its two hundredth episode—“one of the greatest moments in the history of human civilization,” Zaltzman called it—and it seems unlikely to slow down. The show has survived being dropped by its former sponsor, the Times of London, and may start a membership program to recoup costs. For now it remains a highlight in what is an increasingly crowded world of comedy podcasts, radio sketch shows, and interview programs like Marc Maron’s WTF. A whole constellation of audio comedy has emerged in recent years, drawing as much on the tradition of old stage shows as on the latest sitcoms. Few of them, however, can make jokes about tax policy funny; Andy Zaltzman somehow manages.