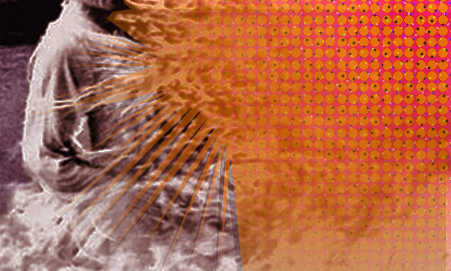 In middle school, I couldn’t stand to look at the cover of my favorite album. I turned it around in the thick folder that held all of my CDs; sometimes I hid it behind more anodyne album covers, behind lyric books and photos of bands in practice studios. Occasionally I would take a quick, uncomfortable peek, but throwing it away somehow seemed sacrilegious or an admission of weakness. It was the image on the cover of Rage Against the Machine’s self-titled album that bothered me—the iconic photo of a Vietnamese Buddhist monk named Thích Quảng Đức engulfed in flames.

On June 10 1963, Đức, along with a few hundred other monks and nuns, took part in a protest of the South Vietnamese government’s treatment of Buddhists. He stopped in a Saigon intersection near the presidential palace, sat down on a pillow, doused himself with gasoline, and set himself on fire. David Halberstam—one of the few foreign journalists to witness the event—reported that Đức never moved, while Malcolm Browne’s photograph of Đức was disseminated worldwide, shocking President Kennedy and later spurring him to withdraw U.S. support for the South Vietnamese government.

As an eighth grader, this political and historical context was mostly lost on me. The photograph seemed like some expression of overpowering despair, but its particulars were unclear. Instead, the photo impressed upon me both the frightening power of some images and the trickiness of using them for mixed commercial and political ends. But even if I wasn’t sure of what Rage Against the Machine was trying to do, that album taught me that art could be political, that it could and should make a person uncomfortable, and that the glare of spectacle could sometimes obscure and reveal truth in equal measure.

Moshe Silman’s self-immolation has caused me to think again of Thích Quảng Đức, as well as the Americans who later engaged in self-immolation in order to protest U.S. involvement in the Vietnam War. Fifty-seven years old and deeply in debt, Silman had been driven to desperation after difficulties finding public housing. Having suffered a stroke, Silman couldn’t work and believed that the Israeli government’s social safety net had failed him. On July 14, he lit himself on fire at a protest in Tel Aviv; he died on Friday in a hospital. Since his act, at least four other people have attempted self-immolation, with one, Akiva Mafa’i, a 45-year-old disabled IDF veteran, succeeding.

Some Israeli commentators called the self-immolations senseless, while others acknowledged that they reflected an underlying desperation that hasn’t been reckoned with. One protest leader told the Times of Israel that they should “stop this wave while taking the message seriously.” She added that “usually the tragedies are invisible, but this time we watched it happen.”

It’s this latter remark, I think, that gets at the heart of the matter, which is the failures of Israeli and American cultures alike to not only address the plight of the poor but even to depict it honestly. Poverty has long been seen as distasteful, unsuited to the go-go entrepreneurialism our countries share. It can only be looked at sidelong or through a veneer of sensationalism—the violent death of a homeless man makes for a good story; how he got there, less so.

In a recent essay in the journal The Baffler, Heather Havrilesky argues that on contemporary television, “the very rich are either breathtakingly noble or downright nefarious, while the very poor are as self-destructive and helpless as injured animals.” The show Two Broke Girls illuminates little about its title pair, except that the poor “better prepare to be humiliated by those with more money (and therefore more dignity).” In this regard, Havrilesky cites Downton Abbey as “the show for our moment, unique in offering the old-world rich as the remedy for the miseries and woes of the lower orders.”

Indeed, when it comes to class, the dominant message of today’s pop culture is that the poor aren’t poor; they’re simply not yet rich, and they must overcome poverty’s intrinsic depravity. We’ve accordingly made models of our financial elites, dividing them into altruistic benefactors (Warren Buffett, Bill Gates, half of Hollywood) and devious oligarchs (the Koch brothers, Sheldon Adelson). Donald Trump occupies some third category: we tolerate him as an entitled buffoon—a Billy Madison who never wised up—and carnivalesque showman, though when The Apprentice was among the most popular shows on TV, he epitomized the vulgar aspirations of wealth.

The media has granted those rich who aren’t yet famous the sobriquet of “job creators”—a euphemism that has an almost industrial sense about it, as if they have come to replace our departed manufacturing base, machining jobs on the shuttered assembly lines and distributing them via UPS. Occasionally, job creators revel in their behind-the-curtains power. On CBS’ Undercover Boss, they spend a week slumming it with entry-level workers, where they might learn some truth about hard work that can’t be discovered without a camera over one’s shoulder.

When we do see the poor on television, it is usually on shows like Undercover Boss, where the distorting lens of reality television doesn’t accurately depict the privations of poverty but rather makes a fetish of it. We have other reality TV shows about the lower classes, about teen mothers, Louisiana rednecks, hoarders, coupon fanatics, and the world’s worst jobs. They’re our rare growth industry. Jerry Springer—who as a Democratic politician once tried to save Cincinnati residents from being drafted to fight in Vietnam—became rich by being a ringmaster to an endless procession of the poor and uneducated. After 21 seasons, he’s still going, his show having been normalized as something campy and even endearing, rather than crassly manipulative.

On the otherwise stellar AMC series Breaking Bad, Walter White, a school teacher soon to be overwhelmed by bills for his cancer treatment, is depicted as too proud to accept the financial help of a semi-estranged friend. He chooses what’s treated as a nobler, but more dangerous, alternative, without which the show wouldn’t exist: he becomes a meth cook and, later, a drug kingpin. If the show is attempting an honest critique of the structural inequities that plague our for-profit medical system and how it can drive a lower-middle class family to the brink of poverty, it mostly does so by way of subtext (and only in the first couple of seasons). Poverty is more interesting when sublimated into old-fashioned capitalist striving. Be a criminal if you have to; just make sure you pay your bills.

The obvious truth is that poverty makes for meager entertainment, and so in order to be made palatable for television—or for politics, which is no longer substantively different from entertainment—it is dressed up in burlesque, ridicule, or spectacle. It is made into something bizarre and remote. And when the poor choose spectacular acts to express their despair, we grant them our attention, because they have spoken in the language of the day.