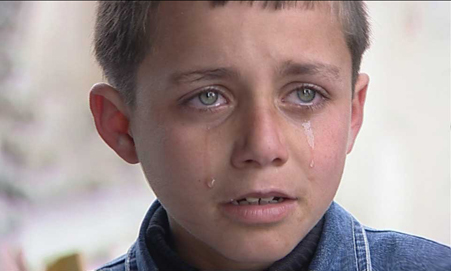 Tears of Gaza is a strange bird, a documentary that has a total grasp of its subject—the suffering of Gazans, particularly children, during Operation Cast Lead—but is almost defiant in its lack of context. Focusing on the 22 days when the IDF launched a devastating military campaign in Gaza in late 2008 and early 2009, Tears of Gaza presents some of the most extraordinary footage of urban combat that I’ve ever seen. Its scenes of people scouring the rubble of apartment buildings and languishing in bloody hospital emergency rooms are difficult to watch. The smoke from bomb detonations, mixing with the dust of collapsed buildings, fills the screen like an apocalyptic weather event.

But Tears of Gaza, which is screening this week in New York, offers no background material about the nature of the conflict, such as that Israel launched an air and ground campaign against Hamas in response to repeated rocket fire against towns near the Gaza strip. Some characters in the film make mention of the economic blockade, but it’s otherwise unexamined. Nor is there discussion about the Goldstone inquiry and the controversy it engendered. We also don’t learn that Operation Cast Lead, while a particularly destructive and deadly campaign, can be seen as part of a cycle of tit-for-tat violence between the IDF and militant groups in Gaza. The word “Hamas” goes similarly unspoken.

Rather, the film opens simply, with some title cards explaining that Israel embarked on a bombing campaign in late 2008 and statistics about the number of Palestinian casualties. Following that, we are introduced to some main characters, including Yahiya, a green-eyed young boy who wants to become a doctor in order, he says, to treat people who have been hurt by the Israelis. With no narration—subjects frequently speak directly to the camera, and notes on-screen reminds us of the date and location—we then follow Yahiya and his family, along with several others, as they dodge Israeli bombs. There are also frequent scenes of bodies (and the occasional survivor) being pulled from the rubble, as well as desperate flights down murky streets in search of some kind of shelter.

Despite its deliberate myopia, I found myself deeply moved and impressed at Tears of Gaza. Crucially, the film makes no claims to comprehensiveness. Although it leaves much out, including all that I mentioned earlier, it also does not claim to present one true, all-encompassing narrative about life in Gaza or the conflict between Israel and Hamas. Its “bias” is simply that of the camera and what it sees. There is no further editorializing attempting to make a rhetorical point, though the sympathies of Norwegian director Vibeke Løkkeberg clearly lie with the Palestinians, particularly the children, to whom the film is devoted.

There are, however, some attempts by the people within the film to offer commentary. Whether prompted by the cameraman or their own experience, they know that they are offering a kind of testimony and that a film can be a place from which to launch appeals to the outside world. In one scene, three dead children are shown on a table at a hospital. Two have bullet holes in their chests, one in his head. They appear to have been shot at close range. A voice off-camera says, imploringly, “There is no editing here.”

Tears of Gaza, then, is best interpreted as a heartrending glimpse of people living and dying amidst horrific conditions. Those holding the cameras—they are Palestinian—do so at mortal risk to themselves. But save for experiencing the real thing, their footage represents the closest one can get to understanding what it is like to experience a fusillade of bombing and artillery; to live in an overcrowded conurbation that may be blown apart at any moment. In this atmosphere, safety is entirely contingent—the film takes us, for example, to a UN-run school, an ostensibly neutral place that later comes under artillery fire; news reports at the time counted 40 killed in the attack, while Israel claimed that militants fired at them from within the school.

During the extended scenes in Gaza hospitals, when children are rushed in with gaping wounds, their faces shrouded in grey dust so that they look like some abandoned rag doll, the parade of gruesome injury can be overwhelming. The viewer is forced to perform a kind of emotional triage, acknowledging, for example, that the children who still cry and scream are likely in better shape than those who stare dazedly into space while being worked upon by doctors and nurses.

This is the “point,” if one can be so glib, of Tears of Gaza: that this breed of suffering is senseless and heinously creative in the variety of destruction it wreaks. That there is far more to this story—decades of painful history, competing political and national narratives, far too much death, mistrust, corruption, and wasted opportunity—makes this film no less powerful or urgent.

(still image from Tears in Gaza)