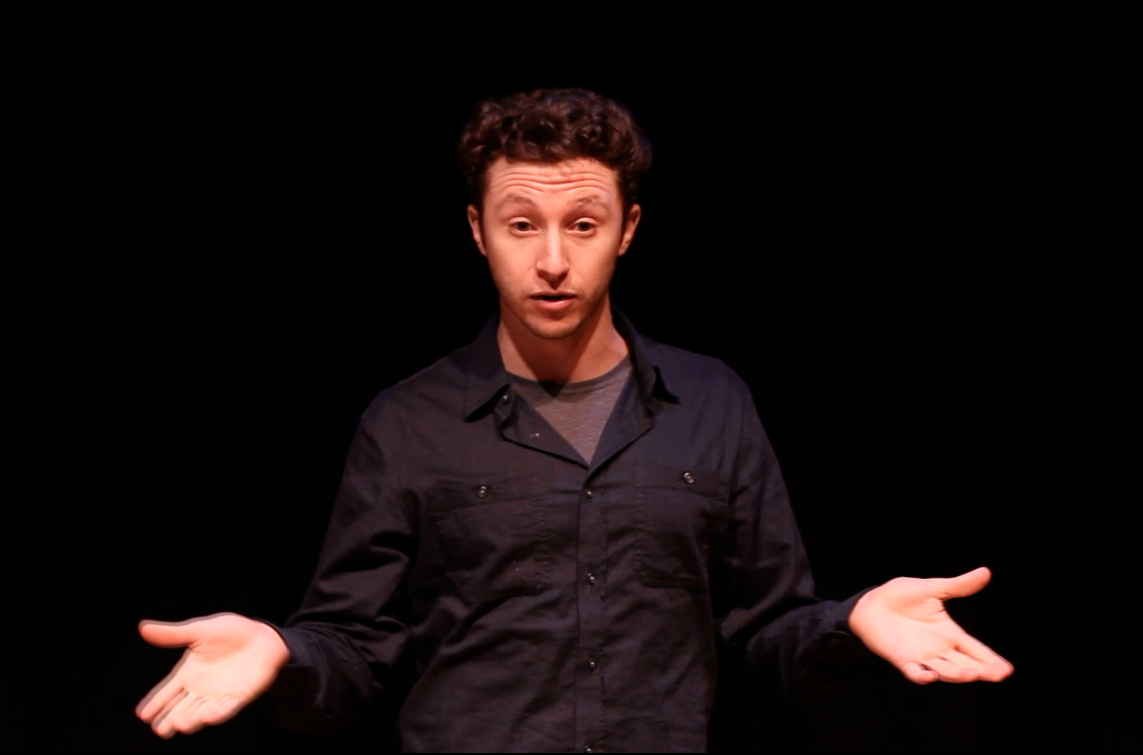 The problem with marketing a satirical play about Holocaust denial is that some people will take you seriously. That’s been the case with Hoaxocaust! (the exclamation point is obligatory), a one-man show by Barry Levey, a 34-year-old New York playwright. In an age of Sacha Baron Cohen’s relentlessly in-character antics and the epistemological uncertainties of the Web, one would think that people had wised up; yet skepticism apparently remains in short supply. Perhaps with the play’s prominent subtitle—“With the generous assistance of: The Institute for Political & International Studies, Tehran”—and vaguely fascist iconography, some credulousness should be expected.

Even so, Levey’s been surprised by the response.

“There are people who, just from the title and the tongue-in-cheek website, are absolutely positive that this is a play that promotes Holocaust denial and are furious and are leaving messages about some really heavy, horrible stuff. Like, ‘I don’t know who you are, but I hope your family burns in hell.’ ”

Others have left “grateful messages,” believing that the website is in line with their own denialist beliefs. Levey and his team have made an effort to scrub these comments (the show has a fairly vigorous social media campaign and has encouraged discussion on its various online platforms).

Running through June 17 at the Theater for the New City (the location is “off off Bowery,” according to one of the play’s jokes), Hoaxocaust! tells an exaggerated version of Levey’s own story—that is, of a liberal, gay, secular Jewish man searching for a religious and Zionist identity that is not dependent upon the memory of the Shoah. The play is at times schematic (and includes a post-show talkback session with producers that I found a little trite and wearisome), but it’s also clever, cooly provocative, and takes the audience in some unexpected directions. Moreover, it manages to introduce some levity into an area of discussion that would seem humor-proof.

The setting is simple to the point of austere: a black box theater with three low risers, a large white screen as a backdrop, and a number of chairs that are rotated in throughout, allowing the Levey character to act out conversations with a murderer’s row of well-known Holocaust deniers: Arthur Butz, David Irving, Robert Faurrison, and Mahmoud Ahmadinejad.

True to title, there’s a great hoax at the heart of Hoaxocaust!. There are several, in fact, and one is that the play-version of Barry Levey (let’s call him Barry) begins to believe the deniers whom he interviews. It’s partly a willed delusion: If the Holocaust were not as bad as advertised, Barry thinks, then Jews wouldn’t have to consider themselves victims, and the Holocaust wouldn’t form such a central part of modern Jewish identity. And, the play also argues, the Shoah wouldn’t serve as justification for Israel’s perceived belligerence towards its neighbors.

Or, as Barry asks: “I mean really, the Holocaust is our rationalization for everything from our war plan to our dating pool?”

While the play’s editorial line seems clear in arguing that the Holocaust and its legacy have been exploited for political purposes—and have played too central a role in the formation of post-war Jewish identity—Levey is more diffident in person.

“I can certainly understand that there are probably great arguments to be made on both sides of how big of a role the memory of the Holocaust should play in our political discourse about things like the state of Israel or how to deal with Iran,” he said. “So I don’t know. I wouldn’t presume to say one way or the other, and I hope the play doesn’t say one way or the other. But I do worry about it enough that I think it’s worth asking the question and having the play ask the question.”

The play’s genesis can be traced to Operation Cast Lead, which Levey told me, “was one of the first times in my adult life where I found myself questioning, what are the unintended consequences of our actions?” As a child, he said, he had never been taught to empathize with the suffering of Palestinians.

There was also a more recent, and distinctly New York, bit of inspiration. Levey holds down a day-job as a legal secretary in Midtown, where the so-called Mitzvah tanks—RVs out of which Chabadniks dispense prayer, tefillin, and religious literature—are ubiquitous. Their familiar call—“Are you Jewish? Are you Jewish?”—had become a source of anxiety for Levey.

“I find myself tensing up that I don’t know the answer to that question,” he said.

He began crossing to the other side of the street to avoid them.

“Are they asking me about my religion? Because I don’t really feel very religious. Are they asking me, Am I ethnically Jewish? Do I believe in race and ethnicity anyway, and if I do, I guess ethnically [I’m Jewish]. Or are they asking me culturally? This whole thing happens in my head. I feel so overwhelmed by just that question that I figured there was something going on inside me—if I can’t walk past the Mitzvah Mobile without having a minor breakdown.”

This neurotic kernel gives Hoaxocaust! some emotional heft, and prevents it from being simply a creative exercise in historiography. While the play is structured around its fake interviews, there’s also a personal strain to Barry’s plight. His brother is marrying an Arab woman, which has divided the family and caused Barry’s Puerto Rican boyfriend to accuse him of being racist. And there is a void in Barry’s family history, where the Holocaust is present but mostly unaddressed. In one brief scene that’s both haunting and darkly funny, Barry recalls when representatives of the Shoah Foundation arrived to interview his grandfather. A survivor already well into senility, his grandfather refused to entertain his visitors.

“The Holocaust?” he asks, impatiently. “People still believe in that? That’s just a story I cooked up with Satan.”

The scene actually prefigures some bizarre conversations with Ahmadinejad and even Satan himself, as the play embarks on a magical realist bent.

“At first I didn’t think I was going to have to make it fantastical,” Levey said. “When I first had the idea that I was going to write about Holocaust deniers as if they were right, I thought it was going to be so easy to just be funny. Because I thought everything they had to say was just going to be so ridiculous that all I have to do is just say what they said and it would be a laugh riot. But then when I actually started researching what they said, I found that it wasn’t very funny at all, and it was actually terrifying.”

The flights into the fantastic make some ironic sense, as they reflect how deniers’ arguments are so absurd—the Shoah is the most thoroughly recorded and studied event in human history—that they are impossible to believe. Yet a troubling minority do believe deniers, whose arguments, which generally collapse under close scrutiny, can still exhibit a surface-level cogency.

Cribbing deniers’ arguments from websites, speeches, and books, and drawing on the work of Jewish scholars like Deborah Lipstadt and Alex Grobman, Levey found himself bothered by how some deniers, like Arthur Butz, who’s a tenured professor of electrical engineering at Northwestern University, bedeck themselves in the trappings of respectable scholarship, presenting themselves as the true arbiters of “facts.”

More disturbing, perhaps, were people whom Levey encountered, online and in real life, who weren’t versed in history and seemed open to denialist arguments. It’s this willingness to be skeptical that Levey calls “the first step on the road to denial.”

There’s a distinctly au courant air to how this concern is manifested in Hoaxocaust!. The sense that truth has been fundamentally destabilized in the digital-first, post-print era, that nothing can be known for certain and that old-fashioned, scholarly expertise has been superseded by rankings in search results—all of this, Levey argues, means that Holocaust denial has acquired a new life. It can now propagate through the Internet, free of any gatekeeper and operating on an ostensibly equal footing with an article by Lipstadt or a story in Haaretz. New narratives develop—the type of pen Anne Frank used wasn’t invented until 1953, or the gas chambers show minimal residue of Zyklon B—to take advantage of developments in forensic and material sciences.

(Advances in science and scholarship can also reveal the limits of what can be known, as explored in the play The Soap Myth, which looks at the rumor that Nazis made soap from human flesh.)

All of this has left Levey worried about “how we process information and how we vet information.” Those dives into the rabbit hole of denialism made him understand the power that these narratives, and the “facts” marshaled in their support, can have. And while his alter ego’s willingness to believe isn’t always convincing, he does dramatize the ease with which someone may fall under the spell of an Irving or Faurrison.

Hoaxocaust! ends in this place of uncertainty—a problem articulated but certainly far from being solved, its protagonist, now converted, personifying denialism’s malignant power. Barry’s turn from hero to anti-hero left me in mind of one of his line’s from early in the play:

“If you wanted it easy, you should’ve gone to Old Jews Telling Jokes.”