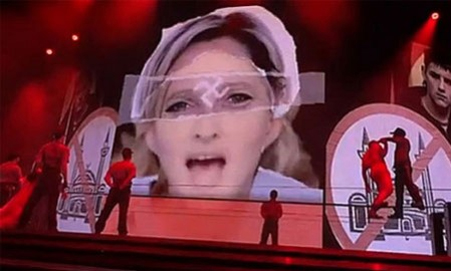 Madonna has responded to the controversy—and lawsuit threat—that her use of a swastika during recent concerts has sparked, saying she uses the symbol (broadcast on the face of French Front National leader Marine Le Pen) to show “the intolerance that we human beings have for one another.”

According to the New York Times, which quoted a Brazilian television interview with the Material Girl:

The singer said the image was justified because the song concerns intolerance and explores the question of “how much we judge people before knowing them.”

“Music should be about ideas, right?” she said. “Ideas inspire music.”

Is this bizarre concert stunt actually about ideas, as Madge claims, or just attention? See for yourself: