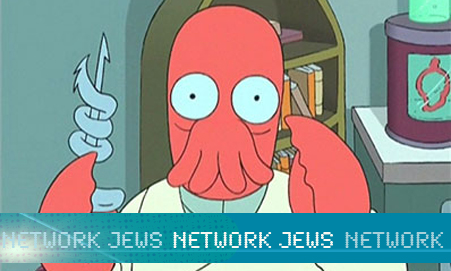 While we generally leave journalists and political pundits to discuss and predict what the immediate future may bring, there are scores of nerdy, computer-literate, and otherwise “indoor” types who formulate what will happen in the next millennia, instead of in the next fiscal quarter. These are our dear and not-so-near science-fiction writers, whose pimply-faced audiences are turning their inventions into realities as we tweet. One of their more lighthearted prophecies is the satirical animated series Futurama, created by David X. Cohen and The Simpsons’ Matt Groening, which addresses the issues of life in 31st-century “New New York.”

The series, which was canceled by Fox in 2003 and revived by Comedy Central in 2008 due to high DVD sales and a committed fanbase, much like Family Guy, follows the dysfunctional misadventures of the crew of Planet Express, a dismally inefficient intergalactic delivery service. Under the auspices of the geriatric mad scientist Prof. Farnsworth, the business serves as a courier for such futuristic items like dark matter energy, alien aphrodisiacs, and honey from giant space bees. In this not-so-advanced landscape, aliens and mutants live alongside humans, hovercars and pneumatic tube travel are realities, and the preserved head of Richard Nixon is President of Earth.

The world of Futurama can also provide us with some foresight on what the Jewish legacy might be like in a thousand years through Dr. John Zoidberg: The pathetic and klutzy lobster-like extraterrestrial with questionable medical skills and a strong Yiddish accent, who also happens to be the resident doctor of Planet Express.

Disliked and ignored by virtually everyone on the show, this lab coat-donning crustaceous alien is perpetually scavenging for garbage scraps as well as any iota of sociable interaction and approval—(he is so unlikeable that you might get punched in the face for even imitating him. Unlike most other secondary characters on the show, Zoidberg is rarely seen engaging in any dialogue with others—he exists mainly as an entertaining and foolish sideshow, recalling Chaplin-esque misadventures and the reckless blunders of the Three Stooges. His eager desire for attention has even found its way into Internet culture with the popular “Why not Zoidberg?” meme—something that he never actually says in the show but was created as a pastiche from his need for recognition and Yiddish rhetoric.

Despite Zoidberg’s accent, which voice actor Billy West claims was influenced by “marble-mouthed” Jewish actor George Jessel as well as other “rabbinical” and Bronx voices (which is complemented by telltale grammatical constructions along the lines of “You want I should put it here?”), he and others of his species are never explicitly referenced as Jewish. We get many clues, however, such as the episode featuring his burnt-out movie star uncle Harold Zoid—who was voiced by the inimitable voice and character actor Hank Azaria (the same year he starred in a TV movie about the Warsaw Ghetto Uprising)—that recalls the golden, and largely Jewish, age of Hollywood.

A later season showcases Zoidberg’s home planet Decapod 10, full of even thicker-accented Ashkenazi shellfish (perhaps planet Decapod 9 is full of Sephardic crabs?). Further solidifying his Jew cred, in my personal favorite Zoidberg moment and one particularly telling of his cultural and stereotypical Jewishness, he has a flashback of his mother reprimanding his dream to become a comedian and suggests he become a respectable doctor—yet she later reprimands him once more for being spineless and giving up his dream of becoming a comedian by going to medical school.

Yet aside from accents and behavior, nowhere does it ever mention that Zoidberg or his fellow trayf crustaceans are Jewish. Interestingly enough, the only explicitly Jewish characters on Futurama are a handful of robots—we witness a “Goldborg Bot Mitzvah,” complete with robot hora dancing, a banner reading “today you are a robot” in Hebrew, and a rabbi explaining his attitude toward Robot Jesus—he believes he was built, and well programmed, but not the robot messiah.

The Jewish robot life cycle also includes “Robanukah,” a holiday that spurs Bender, Planet Express’ mischievous robot, to sing a song explaining the traditional six and a half weeks of oil wrestling—which eventually faces a crisis when his oil supply runs short two weeks, prompting Bender to descry that he needs oil for the whole holiday since it isn’t a “lousy Reform Robanukah.” Although Zoidberg’s Jewishness is less explicit than the robots’, he is still clearly Jewish. As others have noted, unlike the Irish vaudeville comedy of The Simpsons, Futurama is pervaded by the Jewishness of its borscht-belt comedy and Woody Allen-esque despair, giving Zoidberg and others their distinct and not-so-kosher personalities.

Given his disguised yiddishkeit, Zoidberg appropriately plays the parts of the Jewish character types the schlemiel and schlimazel—the one who spills the soup and the one who gets spilled on. While one could lament that the legacy of Jewishness in Futurama is embodied by Zoidberg’s overwhelming ineptitude, it’s clear that the series serves as one more atomic bond in the ever-strong molecular chain between Jews and geekdom. And above everything else, I’m certainly glad that at least according to Futurama, Jewish humor has survived for another thousand years.

Max Daniel is an undergrad at Columbia and JTS, studying American Studies and Jewish Literature. When not attending Bob Dylan concerts or writing for The Current, he can be found formulating conspiracy theories about the origin of the Internet.