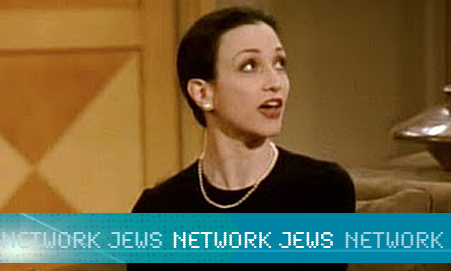 It is, one has to assume, no accident that Lilith Sternin (Bebe Neuwirth) of Frasier (and Cheers) is named after the biblical Adam’s mythological first wife, known in legend as a demonic, child-killing woman. Frasier Crane’s ex-wife may not snatch newborns, but she’s hardly easy to love.

Like Frasier, Lilith is a psychiatrist; an exceptionally smart woman given to a distant, highly intellectualized, unemotional way of interacting that often has her branded an ice queen by members of the Crane family. She is the image of consummate uptightness: Her hair always in a perfect bun, her wardrobe a treasure trove of pantyhose and sensible, darkly colored suits. Frasier consistently refers to her domineering ways. In one episode, he snorts, “If I had trouble taking orders from a woman, Frederick would never have been conceived.”

Even when it comes to her child, where Jewish women are generally thought of as exuding warmth and caring to a smothering degree, Lilith expresses love in unusual ways. In one episode, Frasier and Lilith become consumed with getting young Frederick into an exclusive prep school. After an initial visit at the headmaster’s house, Frasier and Lilith return repeatedly to try to butter up the fussy teacher—in one ruse, Lilith pretends to have left behind an earring given to her by Golda Meir. Meanwhile, Frederick, under the care of his grandfather and uncle, gets hit in the face with a baseball, breaks out in hives from eating anchovies, and walks into the refrigerator door. In her zeal to secure Frederick’s academic future, Lilith, the Jewish mother meant to tend to her son’s every hangnail and skinned knee, doesn’t notice his shiner and rash.

But underneath the cold, calculated, emotionless exterior runs some hot blood. Lilith is also, it turns out, a bit of a temptress. In one episode, after Lilith’s new husband has left her, she visits Seattle to turn to Frasier for emotional support. Frasier is anxious—in times of distress, he has trouble resisting Lilith, a weakness exacerbated by the short red dress Lilith turns up in. “Oh, baby,” he moans sadly when he answers the door, resigned to the certainty of his giving in to his attraction.

Despite her sexiness, Lilith retains some essential Lilithness—she greets Frasier’s brother, Niles, in a characteristically blunt way: “I’m sorry to hear your marriage ended in a shambles.” And yet, the next morning, Niles wakes up in bed with Lilith, cursing her “bewitching” ways.

So Lilith—both siren and schoolmarm—encompasses the opposing ideas that have long been the hallmarks of Jewish femininity: that Jewish women are either frigid or floozies, uptight in bed or else quite the opposite. Jewish women have long been associated with a conniving sort of sexuality; from Ivanhoe on, literature is filled with Jewesses who use their wiles to get their ways. But in a post-World War II world populated with literary characters like the prudish-but-trying-to-get-over-it Marjorie Morningstar, Jewish women became withholding shrews. It’s the attitude that led Anthony Weiner to famously exclaim last year, in what must win the honor for most romantic text message of all time, “Wow, a Jewish girl who sucks [word for penis that my mother would not approve of]! This thing is ready to do damage.”

Lilith isn’t exactly doing much to dispel the stereotypes. Vacillating between repellently repressed and bewitchingly seductive, she has it both ways, but doesn’t win any fans. Her reputation precedes her; when Frasier mentions that she is in town, Niles deadpans, “Oh, so that explains why blood was pouring from all my faucets this morning”—but still sleeps with her in the same episode. Lilith is destined to exist in the in-between world of beguiling and repugnant, in which she has both the power to tempt and the power to terrify. But Lilith might be playing the stereotypes to her advantage: Either way, she’s got the power.