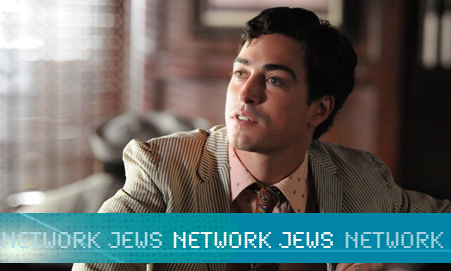 That Don Draper is a singular talent—perhaps even a genius—is central to the premise of AMC’s Mad Men, the penultimate season of which commences this Sunday. Though at times the series has chipped away at Don’s (Jon Hamm) seeming professional invincibility, viewers still believe fundamentally in his exceptional abilities. Yet, at the very moment when Don seems to deploy his formidable skill less frequently, viewers are introduced to a new but equally striking talent in young copywriter Michael Ginsberg (Ben Feldman). Don’s changing role in the firm—and evolving sense of self—was an important theme of the series’ fifth season. Central to that theme’s exploration is Ginsberg—the smart-alecky, frenetic savant who just might be the evolutionary Don Draper.

We are introduced to Ginsberg in his comically awful interview with Peggy (Elisabeth Moss) in the season’s third episode. He makes perfectly clear to Peggy that he is only interested in meeting Don, and anything else is a chore. Here Ginsberg scans as a Woody Allen caricature, twitchy with a darkly off kilter sense of humor. (“You know, your book really does have a voice.” “That’s what they said about Mein Kampf.”) Despite the terrible first round interview, Peggy reluctantly brings him back in to meet Don—with whom he’s equal parts gregarious, clever, and charming—and Don gives him the job.

So begins the fascinating relationship/rivalry/pissing contest between Don and Michael. It takes all of one episode for Mad Men to insinuate that Ginsberg may be uncommonly skilled in his own right. After selling a campaign to Butler Shoes, Ginsberg goes off the rails, telling Mr. Butler about an idea the creative team rejected. But he does so in such beautiful, vivid detail that Butler asks, “Why don’t we do that?” Don is livid. “In your heart you knew it was good!” Ginsberg offers. “In my heart, I’m on the verge of throwing you in front of a cab,” Don retorts. Their repartee is in part a diversion. As a businessman, Don is incensed Ginsberg did not stop when the client said, “sold.” But mixed with his disgust is fear. Don is threatened that Ginsberg demonstrates, in his own way, the ability to sell creative work at a level previously accessed solely by Don himself.

It is Ginsberg’s skill making the pitch—the very skill that made Don a legend—that puts him in Don’s crosshairs. Even after the first accepted pitch, Mr. Butler called Ginsberg a genius. Don coughs demonstratively. We are watching the rise of a new advertising star at the very moment Don transitions to a more heavily managerial role. For the first time, viewers are asked to entertain the possibility that Don is not peerless—something Don seems keenly aware of as well. For a show that emphasizes the exceptional talents and personal shortcomings of one central character, the role played by Michael Ginsberg is deeply jarring.

Don’s professional brilliance always seemed tied—even obliquely—to his back-story. He was a man without a firm identity, a hobo—drifting and alone. In a startling scene with Peggy and Michael late at night in the office, we learn that Michael is the most unusual of Holocaust survivors: a child born in a concentration camp. “Are there others like you?” Peggy asks. “I don’t know,” Michael replies heavily, his back to the camera and reflection lit up in the window. “I haven’t been able to find any.” Here, too, we are supposed to connect Michael and Don. As with Don, there is a clear, if inexplicable, connection between Michael’s creative brilliance and personal history. Mad Men intends for us to link Don and Michael as singular individuals and talents.

Late in the season, Mad Men dispenses with the connection’s subtlety. Sterling Cooper Draper Price is working on a campaign for the drink Snoball. Working late at the office, Don happens upon Michael’s work in the writers’ bullpen. Michael wrote the tagline “Get hit in the face with a Snoball!” across a doodle of Hitler. We see Don’s competitive juices flowing. He pulls out the Dictaphone, and throws out, “A Snoball’s chance in hell.” At the next morning’s meeting, Michael’s idea resonates deeply, while Don’s “Yeeees. Even Me.” tagline with a picture of the devil draws polite support.

“Wow. That’s actually good,” Ginsberg says. “I’m glad I could surprise you,” Don sneers. Ginsberg backtracks, but makes it worse. “No, it’s just damn impressive you could not write for so long and come back with that.” Michael cannot help himself from highlighting Don’s aging, rusty approach. Michael could not have known it was his own work that inspired Don to get back in the game. He certainly understands, though, that his comments were openly baiting his boss.

Though the creative and accounts teams agreed to lead with Michael’s “Get hit in the face” campaign at the pitch meeting—to Don’s annoyance and Michael’s pleased-with-himself delight—Don leads with his own idea and leaves Ginsberg’s in the cab. When Ginsberg discovers they bought Don’s devil campaign—without even seeing his own—Ginsberg is apoplectic.

The payoff comes as they ride the elevator together. Michael snaps at Don: “what do I care? I got a million of ‘em. A million.” “Good,” Don counters, without so much as looking at Michael, “I guess I’m lucky you work for me.” Ginsberg tries again: “I feel bad for you.” Don, with a dash of the old swagger, retorts icily, “I don’t think about you at all,” and walks away.

Michael’s frustration is understandable: he outperformed the best, but Don retains creative control and buries Michael’s work. Don’s studiously dispassionate cruelty reveals the extent to which he feels threatened. Michael might eventually render Don obsolete, but not as long as Don can fight it.

“Look at all the great work you’ve done as creative director. Look at all these voices. All this talent.” So says Joan (Christina Hendricks) to Don, as he reviews the campaigns SCDP had created in recent months. But is it true? Don pitilessly crushed the enthusiasm of his talented employee for an ego boost—a cheap trick to convince himself he still “has it.” Not to mention Don finally pushes Peggy a step too far—and out the door, to the agency of a hated rival.

There is a brief moment, late in the season, which suggests Michael’s relationship with Don may evolve quite differently. With the creative team working exhaustively—and unproductively—on the Jaguar pitch, Michael is struck with an idea. He knocks on Don’s door, and the tension is palpable, as they disagree over whether the team works better with Don present or absent. But Michael proceeds. Jaguar isn’t a sexy, temperamental mistress—an idea that got the team nowhere; it’s better than that. “Jaguar,” Ginsberg says, knowing he has nailed it, “At last. Something beautiful you can truly own.” Don’s face goes blank—he realizes it’s perfect. Then he sighs, and smiles knowingly. Ginsberg slaps his hands, pumps a fist, and smiles contentedly. Perhaps it’s the beginning of a productive relationship for two brilliant ad men.

Mad Men watchers have always wondered how things will end up for Don Draper; the fifth season strongly suggests that answer may be delivered through Michael Ginsberg. Will Michael—and Peggy, if she wends her way back to SCDP—team with Don to propel the firm to the heights of the industry? Or have the two young talents been developed as foils for an industry legend’s precipitous decline to irrelevance?

As viewers, we have suspected it must end in one of those two ways. Only with the arrival of Michael Ginsberg, though, can we see the agent of change. Mad Men makes clear that Michael’s future success is not in question. The only uncertainly remains with Don: will he recognize the firm’s potential and capitalize on it? Or will his vices—pride, jealousy, and continuing uncertainty about who he is—prevent him from doing so? Showrunner Matthew Weiner has two seasons remaining to reveal what Don’s future holds, the first of which begins Sunday night.

Dov Friedman works in foreign policy in Ankara, Turkey. Like sportswriter Jason Whitlock, he has a childlike obsession with The Wire.