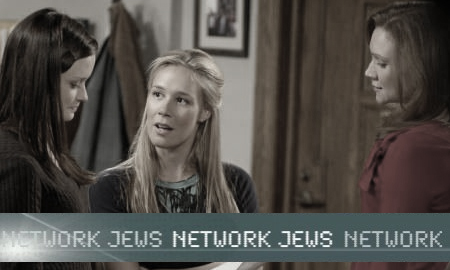 When considering the WB’s seven-season tween nerd favorite, Gilmore Girls (2000-2007), it’s fitting to begin, as the main characters often do, with literature. In “A Little Cloud” from James Joyce’s Dubliners, protagonist Little Chandler visualizes his friend’s description of wealthy Jewish women: “Those dark Oriental eyes, he thought, how full they are of passion, of voluptuous longing!”

Paris Geller, the frenemy of reader-waif Rory Gilmore (Alexis Bledel), may not have been the picture of a rich Jewess that Little Chandler had in mind. But Paris, played by Liza Weil, certainly is one, and almost definitely read Dubliners by the time she was 9. Paris would have scoffed while reading and blurted out some clever PG-rated insult about the Irish, or men, or half-brains. And as she did so, her dark eyes would have swelled with passion—windows to Paris’s fervent, often angry intensity—and Joyce would have been proven right.

The passion of Paris is not sexualized, of course, but channeled toward academic excellence. She is ambitious, competitive, hard-working—in essence, the picture of a college admissions slave—with the achiever’s impulse characteristic of suburbs where parents aspire to put certain college stickers on their car windows. Paris has a lot to live up to if she is not to let everyone down, including herself. Hence her dark eyes cower over textbooks, never allowing the slip of a tear, because there isn’t time enough to whimper when the PSATs approach.

Rory may be the effortlessly charming and bright girl we want to identify with, while Paris is an unpleasant reflection of who some of us may actually have been (or dared not become). Rory and her mother Lorelai—fast-talkers, coffee drinkers, fluent in pop-culture references high and low—navigate a pleasanter, quirkier world than Paris does. In turn, Paris finds herself alternatively at odds with Rory’s steadfast optimism, and placated by it. Ultimately, Paris becomes like a sister to Rory—a demanding, sometimes exasperating sister. For instance, after Paris loses her virginity, she arrives at Rory’s house under the pretense of debate club prep, and then unleashes her mixed emotions—“In the moments just before the act, we were actually discussing modern Marxism in America”— with vulnerable expectance.

Yes, Gilmore Girls is a show about mothers and daughters. But it’s also a show about sisterhood: the bond between Rory and Lorelai disrupts the typical intergenerational relationship setup, and so too, all the women (Sookie, Lane, Emily Gilmore) forge connections of a Ya-Ya variety. Paris isn’t just the rival smart girl in school; she’s Rory’s true foil and friend.

Jewish by birth, raised by her Portuguese nanny, Paris is not deeply observant but participates in perfunctory religious rituals. In the first season, we learn that she had a bat mitzvah, for which her dress was not particularly fashionable. “I’m not trendy girl OK? I don’t haunt the boutiques hoping to find that one fabulous little top. I study and then I think about studying and then I study some more,” Paris explains to Rory when seeking wardrobe advice on her first (and only) date with Tristin Dugray (Chad Michael Murray, the WB’s resident heartbreaker). Paris brings to Stars Hollow the entire contents of her closet, “just in case there was some sort of hidden potential in something that I just didn’t see”—everything, that is, “but my Chilton uniform and my bat mitzvah dress which has menorahs on the collar.”

Paris celebrates Hanukkah, although after she breaks from tradition to visit her boyfriend Jamie’s house for Christmas in Season 3, she comes to a realization: “I’m looking at this mound of gifts and I’m thinking ‘eight days of Hanukkah,’ who was the skin flint that thought up that deal?”

“Yes,” Paris replies. “They symbolize eight days of ripping off kids who can’t have a Hanukkah bush.”

We also come to know that Paris, diligent worker that she is, does not take a break on Shabbat. In preparation for a special issue of Chilton’s school newspaper, Paris not only comes in to work on a Saturday, but also demands that her peers do the same. She makes her case: “There is only going to be one 75th anniversary issue ever, and it’s on our watch. We screw this up and we basically mooned a piece of history. Is that what you want?” Yes, it seems that is what they want. “We’re working Saturday!” Paris shouts, and then walks away, muttering to Rory.

When Paris finally goes to college (rejected from her dream school Harvard, she arrives at Yale) she is forced to recalibrate—with the help of a life coach and a craft table—before she is back to her old self. She takes on the religion beat at the Yale Daily News, and then works herself into a frenzy as the paper’s chief editor before being driven out of office. Rory replaces her, and talks her down, “This job, Paris, being editor, you don’t need this, this hassle. You’re gonna be a doctor.”

Indeed, journalism does not prove to be Paris’s true calling. By the end of the series she applies to top law schools and medical degree programs—and gets into all of them. Good Jewish girl that she is, Paris decides to become a doctor, at Harvard.

Betsy Morais is sometimes a writer and other times an eater of sandwiches and occasionally both. You can follow her on Twitter.