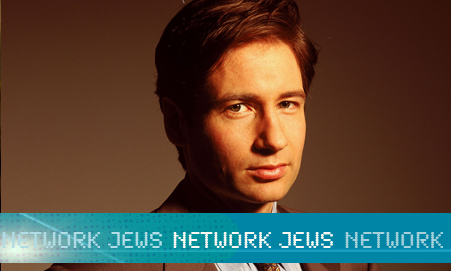 Most people remember The X-Files as a venue for exploring an especially 1990s brand of paranoia and fascination with American weirdness. The series explored everything from government-run alien conspiracy to Satanic cults, but the delivery system for the monsters through those years was almost always one man: Special Agent Fox Mulder.

Mulder, played by David Duchovny, is introduced in the pilot episode, 20 years ago this September, as bespectacled and hunched over a desk, surrounded by images of skulls, countless folders, and stacks of papers, a creature that simply wants to be left in his own habitat to pursue his “weird science.” As the FBI’s resident supernatural expert and conspiracy theorist, Mulder is already steeped in the paranormal far more than an average television viewer who hadn’t spent years sniffing out demons. Though Mulder was the hero of the show, Dana Scully (Gillian Anderson), Mulder’s partner and the audience identification character, was if anything more important as someone who could ease us into Mulder’s insanity. Though Scully was originally our interpreter, we were immersed in Mulder’s brain over the course of nine seasons to the point where Scully, though still necessary to the show, didn’t have to play the skeptic.

The rest of the paranormal happenings in The X-Files wound up secondary when compared with the real heart of the show: the relationship between Mulder and Scully. Somehow, The X-Files managed to transcend some aspects the “will they/won’t they” problem that has plagued many other shows by depicting an emotional connection founded primarily on mutual respect and professional admiration. Though many fans longed for them to get together, it’s easy to watch The X-Files without being invested in Mulder and Scully’s romantic pairing. In some sense, it’s impossible to understand or define Mulder absent his relationship with Scully.

Though his partnership with Scully has been picked apart repeatedly, Mulder’s Jewish qualities are one of the less examined, but still critical, aspects of his character. His Judaism is only hinted at in a few places, most notably Season 6’s “Drive.” Violent anti-Semite Patrick Crump (played by TV’s Bryan Cranston, in the role that convinced Vince Gilligan he could play Walter White) accuses Mulder of being Jewish based on his last name and rails against supposed Jewish control of the FBI. Mulder takes offense at Crump’s anti-Semitism and sarcastically apologizes for the “international Jewish conspiracy.” Though “Drive” doesn’t confirm Mulder’s Judaism, the hints are in line with The X-Files relatively subtle early approach to doling out information, like the early appearance of crucial alien “black oil” in the first-season classic “Ice.”

Even the X-Files episode that treats Judaism most thoroughly, Season 4’s “Kaddish,” like the similar Homicide episode, never mentions the possibility of Mulder being Jewish. The episode’s treatment of the Jewish community is a little silly, to be honest, complete with Yiddish accents. But “Kaddish” does explore Mulder’s relationship to Judaism. Though Mulder claims not to know Hebrew or understand a Talmudic text, he is again confronted with anti-Semitism. Curt Brunjes, an anti-Semite Mulder and Scully interrogate, tells Mulder “you look like you might be one yourself,” provoking a reaction similar to Mulder’s ire at Crump in “Drive.”

It’s worth noting that most of the moments that make Mulder’s Judaism (partial or not) explicit are adversarial in nature, emerging from other characters defining Mulder by attacking him. Considering that Mulder’s entire character is based on his antagonistic relationships with the government and those attempting to dissuade him from his quest for the truth, there’s something that connects Mulder even more to Judaism than whatever religious rituals he happens to participate in.

That antagonism is crucial to understanding Mulder’s often hidden innate Judaism. Mulder may have been raised Protestant—in an episode where Mulder appears to die, a Protestant minister presides over his funeral, though it may not have been in keeping with his wishes—but more important than whether or not he attends services, Mulder is essentially a Jewish action hero. Considering long-standing stereotypes about Jews that were still in wide use in pop culture through the early 1990s (something “Kaddish” did nothing to help with), Mulder’s portrayal as someone who happens to be Jewish, but is not defined by that Judaism, bucks stereotypes. Fox Mulder endured body switching, abductions, and alien super soldiers, and kept it Semitic in the process.

Eric Thurm is a third-year undergrad at the University of Chicago and an editorial intern at the A.V. Club. Find him on Twitter to hear about how he once watched every episode of Futurama twice in one weekend.