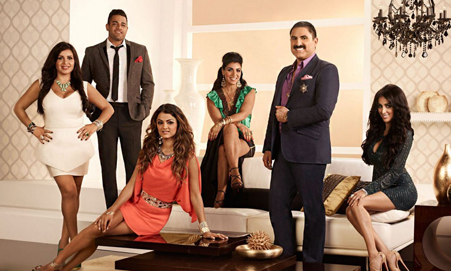 On a Season 2 episode of Shahs of Sunset, Bravo’s reality television glimpse into Persian American life, Jewish cast member Mike Shouhed struggles with introducing his non-Jewish girlfriend to his family. After some encouragement from his brother David (a dentist, obviously), who brushes the meeting off as a “little hurdle” to overcome, Mike brings the Italian-American Jessica to his parents’ house for Shabbat dinner. He explains to the off-screen camera that it’s an effort to fulfill the nagging maternal directive to marry a nice Jewish girl and have babies—just, of course, minus the Jewish part. Mike does his best, but can only meet his mother halfway.

Kiddush is perfunctorily recited by Mike’s father, and white nylon yarmulkes briefly grace the heads of the men in the room. The camera zooms in on a bottle of Manischewitz on the table. After some initial tension post-motzi, Jessica impresses the Shouhed family by knowing to kiss both cheeks, a customary Persian greeting. Her career path as a nurse is also promising—as Mike explains, “Persians love professional degrees.”

As a viewer, it’s unclear what the bigger issue is for Mike’s family–that Jessica isn’t Jewish, or that she isn’t Persian. After all, Mike’s Jewish observance doesn’t seem to go much further than an impressive respect for his mother and regular attendance at Shabbat dinners. As the only self-identified Jewish main character currently on the show, Mike’s storyline follows a well-trodden arc of success and assimilation. For him, the requirements of a Persian and Jewish partner are almost interchangeable—it’s a matter of ethnic belonging and continuity rather than religious priorities.

Shahs of Sunset, which follows the life and times of high-rolling Persian Americans in Los Angeles—Tehrangeles, they call it—as they navigate life, love, and partying, is yet another incarnation in the Jersey Shore trend: American ethnic enclaves mined for reality entertainment. Unsurprisingly, the Persian American community is less than pleased about what it sees as a cheap exploitation of negative stereotypes of cheap wealth and overdramatic behavior.

Yet while much has been said about that controversy, not much attention has been paid to the treatment of religion, and religious difference, on the show. The women on the show are all Persian Muslims. G.G., Mercedes, Lily, and Asa enjoy working and living in Los Angeles in varying industries, from real estate to swimwear. Except for Asa, the self-described Persian Pop Priestess who flings off her chador as part of her performance art, there is little discussion of how Islam plays into their identities—although there is much discussion of what it means to be Persian.

Mike and Sammy, both in real estate, are identified as Jews, although Mike is portrayed as more identified than Sammy (who also demoted to a supporting character in Season 2), attending Shabbat dinners and openly declaring that his Jewish mother is the most important woman in his life. Reza, who is openly gay, is torn between the Muslim and Jewish sides of his family (more on that later).

Season 2 sees both Mike and Reza struggling with issues of Jewish identity and belonging, though in vastly different ways. Mike hesitantly introduces Jessica to tadig, the crunchy rice which is the ultimate symbol of Persian cuisine. In the end, her Italian ethnic identity is close enough for Mike—an unexplained conflation of ethnic and religious identities. In the season’s finale, he asks his family for their blessing, and with his own “freedom of choice” (Mike’s own language) that his parents have given him by leaving Iran, he chooses to marry a woman outside his race and religion—a non-Persian and non-Jewish woman. His own immigrant parents only want happiness for their son.

Reza, the breakout star of the show, is the most vivacious, likable character of the bunch. The product of a Muslim-Jewish intermarriage (Muslim mother, Jewish father), he was raised primarily by his mother after his unfaithful father abandoned the family when Reza was young. He is proudly gay, which, despite initial reluctance from his family, seems to be widely accepted in their traditional Persian community. Despite identifying as a Muslim, Reza admits in Season 1 that he’s never been inside a mosque, adding that he’s been to plenty of bar mitzvahs so he might as well be Jewish.

While the show’s treatment of Judaism certainly leaves a lot to be desired, it at least gets airtime. Throughout the first two seasons of Shahs, Islam was mentioned only a handful of times. Muslim celebrations are either presented as completely secular or constructed as Persian, and not Muslim, events. While Iranian Jewishness is packaged as novel to viewers, Muslim Persian identity seems to have been scrupulously avoided.

For Reza, then, religious affiliation is marked by whom one parties with the most. His in-between status (there is no patrilineal descent here) is revealed during his first trip to Great Neck, NY, where we see his difficult relationship and (eventual on-screen reconciliation) with his father’s side of the family. Reza describes the Long Island enclave as an all-Jewish Persian Utopia, in many ways the suburban other to glitzy L.A.

Reza, bearing a carefully selected parve cake (the scene in Bruce’s Bakery where Reza asks repeatedly if the cake is dairy free is perhaps my favorite from the first season), approaches his father and asks for an olive branch. The two embrace and cry, but the reunion is marred by Reza’s grandmother, a ninety-plus matriarch who is not pleased that her grandchildren are, as she says, “goyim.”

Religion is a double sided sword on the show—harmful when divisions are enforced (such as the punishment for exogamy) but a unifying force when there is food to share and holidays to celebrate. Difference between Persians of varying religions is not a fundamental division, but a matter of generational conflict that can be solved with a family reunion, a good cry, and a healthy dose of American multiculturalism.

In Season 2, Reza brings the entire gang to Great Neck for Rosh Hashanah dinner, in an attempt to make further inroads with his Jewish family. Mike, the resident Jew, explains that Rosh Hashanah is the time to start fresh, and that the group should bring large gifts to Reza’s uncle Hooshang, who graciously agreed to host his nephew’s entourage. (Mike also explains that he had to ask special permission to miss Rosh Hashanah with his family. His mother must have been so upset.)

This pared down celebration of the Jewish New Year, with minimal ritual (a quick shot of apples and honey and a random cousin making a shortened kiddush is all the Jewish content we get) and no synagogue attendance (if anyone does go, it isn’t mentioned) allows for Reza to fully reconcile with his old grandmother, portrayed until now as a rather terrifying personality—perhaps the scariest on the show to date. In a classic Shahs ending, everyone makes up in time for late-evening cocktails.

Perhaps it is quixotic to demand nuance from reality television, but this pop-culture-fan-turned-academic would have loved to see a fuller treatment of religion and ethnicity, how young Persian-Americans are creating their own identities amongst the classic divisions of American society, and how especially Persian Jews are demanding their role on the current American Jewish scene—a scene that is dominantly white and Ashkenazi. While you ponder those possibilities of these Jewish Shahs, you might as well enjoy the tadig.

Shayna Weiss is a PhD candidate in Hebrew and Judaic Studies at NYU and an avid lover of Israeli beaches, Jews on television, and yoga. Follow her on Twitter here.