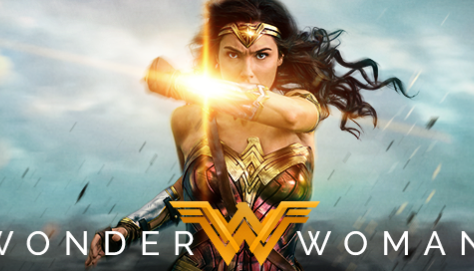 We’ve been over it a million times: Jews invented comic books. And yet Wonder Woman is curiously the only major surviving property from the Golden Age without a Jewish creative team. Neither original writer William Moulton Marston nor artist H. G. Peter were Members of the Tribe (though publisher Max Gaines was).

And yet, Wonder Woman was as virulently anti-Nazi as, say, Superman or Captain America (granted, she debuted only weeks before the attack on Pearl Harbor, when it became less politically controversial to decry the Axis). Unfortunately, this often manifested itself as pretty egregious anti-Asian racism with a dose of general phobia of immigrants (ironic, since Wonder Woman herself is one). Still, the comic’s heart was the in right place, and Wonder Woman can punch Nazis with the best of them. The new Wonder Woman film plays a bit liberally with time; it introduces Diana of the Amazons to the world of men over twenty years before her first comics appearance– at the end of World War I.

And now Jews are very present in Wonder Woman’s big screen debut. Of course, everyone is talking about Gal Gadot as Diana, and it is fascinating to watch an Israeli woman in WWI-era London, when one of the results of the War is the birth of the British Mandate of Palestine. But it should be noted that the screenwriter, Allan Heinberg, is Jewish, too. And the war story he has written is free of Jewish content, but not of foreshadowing.

(Serious spoilers ahead, but if you want to go spoiler-free, we have a piece for you, too.)

In a chilling plot thread in the new film, Wonder Woman and the gang must curtail German efforts to develop a terrible poison gas that not even a gas mask can prevent. A villain, as a demonstration, attacks a local village with the new weapon. Diana rushes in to save them, but it’s too late. The film is sensitive enough to not show us the carnage, but Diana reports that everyone is dead. The scene has obviously drawn comparisons to modern-day Syria, but seeing a Jewish woman lament over the civilian gas deaths in the first half of the twentieth century also has undeniable echoes of the Holocaust.

In this movie, Diana is convinced that Ares, the God of War, has been influencing mankind to fight the Great War. When she finally is face-to-face with him, he tells her that while he inspired new weapons (especially, yes, chemical ones), he did nothing to encourage their use. Humanity did that on their own, therefore, it is inherently corrupt, and deserving of its own destruction. Diana, based on her limited experience in the world, decides that while mankind is flawed, they are also capable of great complexity, and worth saving. So, she kills Ares, and as she had hoped, the War ends shortly thereafter.

In the end of the film, it’s insinuated that Diana is near-immortal and eternally young; when we see her present-day, she’s working (both in and out of costume) in Paris. So this begs the question… what was she up to during World War II? What does it mean that Ares is gone and war only grows more deadly, in technology, and arguably in cruelty? What would it have meant to see a Jewish Wonder Woman fight through World War II onscreen… but will we still have that chance?

Director Patty Jenkins claims that the Wonder Woman sequel will take place in the United States, so even if it is a World War II film, Diana is likely to be more removed from atrocities this time around. While WWI was rooted in political discord and tensions between nations brought to a violent head, WWII was a more clear-cut case of good vs. evil– the sort of black-and-white morality that Diana just spent an entire movie learning seldom exists in the real world.

We’ll wait and see. Honestly, as long as Gal Gadot gets to punch a Nazi, the rest will be a cherry on top.