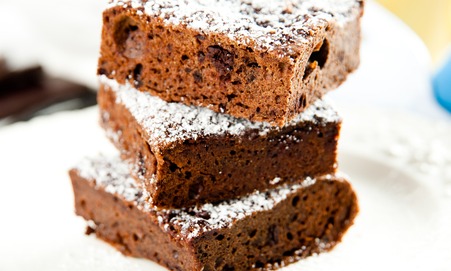 What I’m actually referring to is that this month marks thirteen years since I was diagnosed with celiac disease and began a gluten-free diet. Just as I once turned 13 and became a bat mitzvah, now I’m turning 13 in gluten-free years.

I figured I would buy a gluten-free cupcake on the actual day, text a few people that it was my “gluten-free bat mitzvah,” and that would be that. But upon further reflection, I realized I was actually doing more than just marking a numerical rite of passage. The truth is, there’s a deep connection between my actual bat mitzvah and my diagnosis of Celiac. I was diagnosed about nine months after my bat mitzvah, and the fact that I’m now marking that important moment in my adolescence in a similar manner is meaningful. It’s beyond the number thirteen.

Nine months after I came of age in my community and was asked to take responsibility for myself, I suddenly had to take responsibility for my health. No one was going to do it for me, I was old enough that I had to do it for myself. I was not diagnosed as a toddler or child, an age at which adults would have had to monitor me. Instead, I was a teenager and in my religious community, I was already considered an adult. It was up to me. I would have to learn how to be on a gluten-free diet.

So, at almost 14, right before high school started, I began a strict gluten-free diet. I learned which foods were and were not gluten-free. I learned about cross-contamination, a big issue for those on gluten-free diets. A french fry may start out gluten-free, but once it falls in a fryer with onion rings it’s no longer gluten-free. I tried every gluten-free product out there and stuck with the ones I liked. Most importantly, I learned—and still continue to learn—how to be an advocate for myself.

I cannot expect a waiter at a restaurant to read my mind or the host of a dinner party to remember my restrictions. I have to ask questions about the menu and how foods are prepared to see, first, if a gluten-free meal is possible and, if so, which items are best for me. If I’m traveling, I have to make a plan. I’m not perfect. Sometimes I’m not the best advocate, but I always try and do better the next time.

My first major responsibility after my bat mitzvah has now been a responsibility for thirteen years. As an adult, the diet is now just one of many responsibilities, but it remains an important one, and one that I’ve learned a great deal from. Maybe that’s why I began to feel so strongly about my “gluten-free bat mitzvah.”

Responsibility and all that it entails was first bestowed upon me as a bat mitzvah. I then put those notions into practice with the gluten-free diet, and I’m still learning how to apply them when a question or a problem arises and I have to handle it. I have to make the decision to protect what is important to me and speak up when it’s right—a lesson I also learned upon becoming a bat mitzvah.

My “gluten-free bat mitzvah” may have started out as a lighthearted way to mark a milestone, but it ended up being much more emotionally significant than I could have realized. In a way, I came full circle.