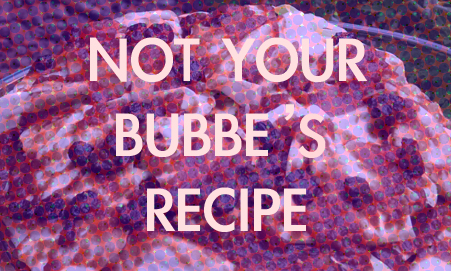 So here’s where one would normally point out a serious flaw in a classic Jewish recipe. The thing is I can’t; stuffed cabbage is magical. And like most modern day magic, there’s a precise science behind it: Everything is improved when stuffed with meat.

Want the proof behind my hypothesis?

Picture yourself after a long bad day where everything is just horrible. Now picture yourself eating a gigantic steak at the end of it. And just like that, your day has improved.

The same logic works with a cabbage. By itself, a cabbage is kind of meh, stuff it with meat and it makes your day.

There’s a reason this dish has been favorite since it was called holishkes. Stuffed cabbage has been happily devoured by Jews since the 14th century. According to Sharon Lebewohl and Rena Bulkin, authors of The Second Avenue Deli Cookbook, the dish was first introduced to the Jewish and gentile peasants in Russia by the Tartars. While each Eastern European and Middle Eastern community has its own twist, Jews lean toward the sweeter sauce.

At some point between the 14th century and the 21st, it became a specialty food served on Sukkot. As Sukkot is also known as the harvest holiday, the filled cabbage was meant to symbolize a bountiful harvest “stuffed” with plenty of delicious things to eat. Sukkot may be over, but stuffed cabbage has thankfully become a winter staple, allowing it to represent good times, as well as good food.

So you must be asking yourself what’s the “but”? Why am I reinventing the wheel if it rolls just fine?

There are many reasons to love your Bubbe but one of them is that they are just about the only people with enough patience to actually make stuffed cabbage. While stuffed cabbage makes your day, it also takes an entire day to make it. That’s where this recipe comes in handy. It’s stacked up like lasagna, and simple, like any staple kugel recipe. Like your favorite kugel it’s a cinch to make and a crowd favorite.

This recipe has that great taste that you love from your Bubbe’s, but let’s you spend more time with the Bubbe you love.

Not Your Bubbe’s Stuffed Cabbage
Serves 5-7

2. Rip the leaves off your cabbage—do your best to keep them as whole as possible. If you accidently rip them to pieces it’s ok; it just won’t look as pretty.

3. Mix the meat filling ingredients together in a large bowl.

4. Combine the sauces ingredients in a different large bowl.

5. Spray a large round baking dish with to prevent sticking.

6. Evenly cover the bottom of the baking dish with cabbage leaves. You want to have about 2-3 layers of leaves on top of each other.

7. Cover the leaves with half of your meat filling.

8. Ladle a third of your sauce onto the meat filling.

9. Repeat the last few stages, as if you are making lasagna.

10. Your final layer should be the last of your sauce.

11. Cover the stuffed cabbage kugel with tin foil and bake for an hour.

12. Remove the foil and bake for another half an hour. Baste the top leaves with sauce every 10 minutes in order to prevent them from burning.

13. Serve with a sharp knife and spoon in order to scoop up all the layers.

Not Your Bubbe’s Squash Pie