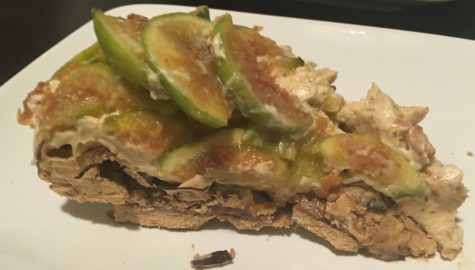 Rejoice, for your holiday saviors are here at last. They are here to bestow upon you their holy light of how to making the best flippin homemades desserts you’ve ever made in your life.

Yotam Ottolenghi is the British-based Israeli restaurateur known for his works like Jerusalem: A Cookbook, a tome that every liberal Jewish resident of Brooklyn is required by law to own. Now, he’s back with Sweet, a deceptively simply-titled book given that completing any of the recipes feels you’re in Snape’s potion class and if you add the porcupine quills while the cauldron is still on fire you’ll break out into painful boils and ruin everything, and your cheesecake will taste terrible.

Ottolenghi’s partner in this endeavor is pastry chef Helen Goh, who is clearly some sort of evil baking genius, taking Ottolenghi’s overly ambitious recipes and adding enough sugar to turn a first-grade classroom into a Lord of the Flies-esque dystopia.

I like baking but am by no means an artist. I can kill it with a simple banana bread, but I’m not one to start piping frosting or melting sauces in a bowl suspended over a different bowl. But I had a copy of Sweet, and so help me, I was going to give it a try, embarking on a journey of late-night meringues, too-much layering, and cutting fresh figs into slices. Figs are very squishy. They don’t slice easily.

First, I decided to start with a cake. My choice was the book’s apple and olive oil cake with maple frosting. The recipe called for vanilla seeds straight from the bean, which I had never purchased in my life. It’s hella expensive, but I figured I couldn’t deviate on the very first recipe, so I dutifully complied. When I tasted the cake batter, I immediately, if grudgingly, noticed the difference from extract.

This recipe included slicing the cake into two layers, putting frosting on the bottom layer, and putting the other half back on top before finishing frosting. But I did it. And people loved it. First recipe, success.

Next, I made pecan snowballs, also known as a Mexican Wedding Cake, which are round cookies made up of mostly sugar, ground nuts, and butter (so. much. butter). They were more difficult than your average dessert, but after the first recipe they were, well, a piece of cake. They were also the closest recipe I tried to something normal— indulgent, easy to grab more than one, and not full of odd flavor combinations or overly unusual construction. Plus, I was able to use some of that pesky leftover vanilla bean. 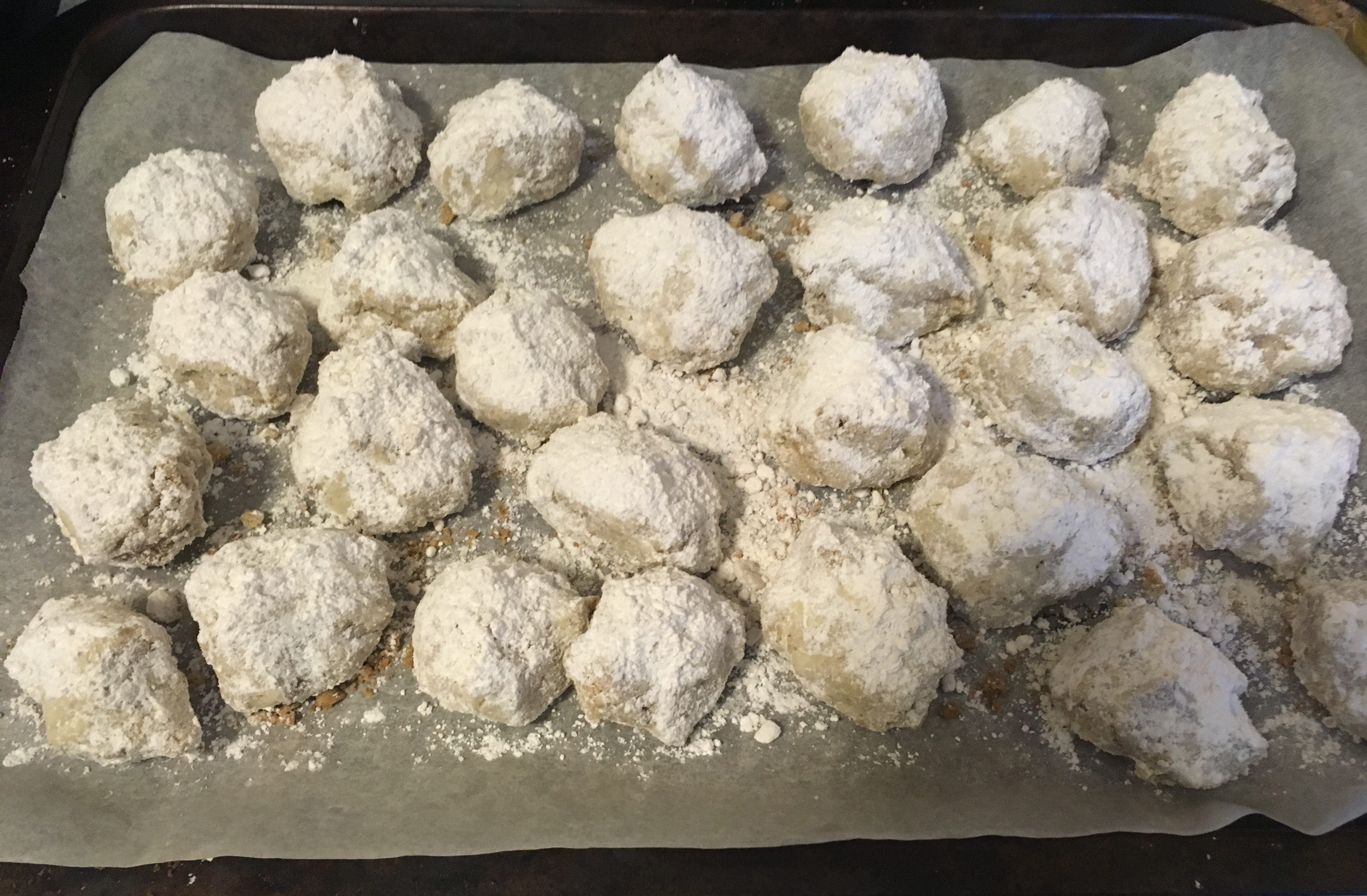 Finally, after two Sweet recipes under my belt, I was ready. The recipe from the cover of the book is a cinnamon pavlova with praline cream topped with figs and honeyed nuts. I had never had a pavlova, let alone made one, but Yotam and Helen had called upon me, and it was my sacred duty to answer.

Was I instructed to make the base of the pavlova, a cake-sized meringue, by pouring batter onto a circle you have pencilled onto a piece of parchment paper and attempt to sculpt it into a nest? You betcha. Did I have to make the praline cream from scratch? Yeah, what do you think this is, Easy-Bake Oven?

It literally took me days to make this thing. Night one was making the meringue, which took hours to bake and hours to set. Then came melting the chocolate, brushing it on the meringue, candying the almonds and grinding them to make the praline, combining that with mascarpone and heavy cream, slicing figs, and garnishing the whole thing with honey and more almonds when it was done. It didn’t look like the cover of the book when it was done, but it didn’t look like a Pinterest Fail either. I was a bit naughty by assembling it a few hours before serving, despite the book’s protestations, but finally, I was able to serve it. 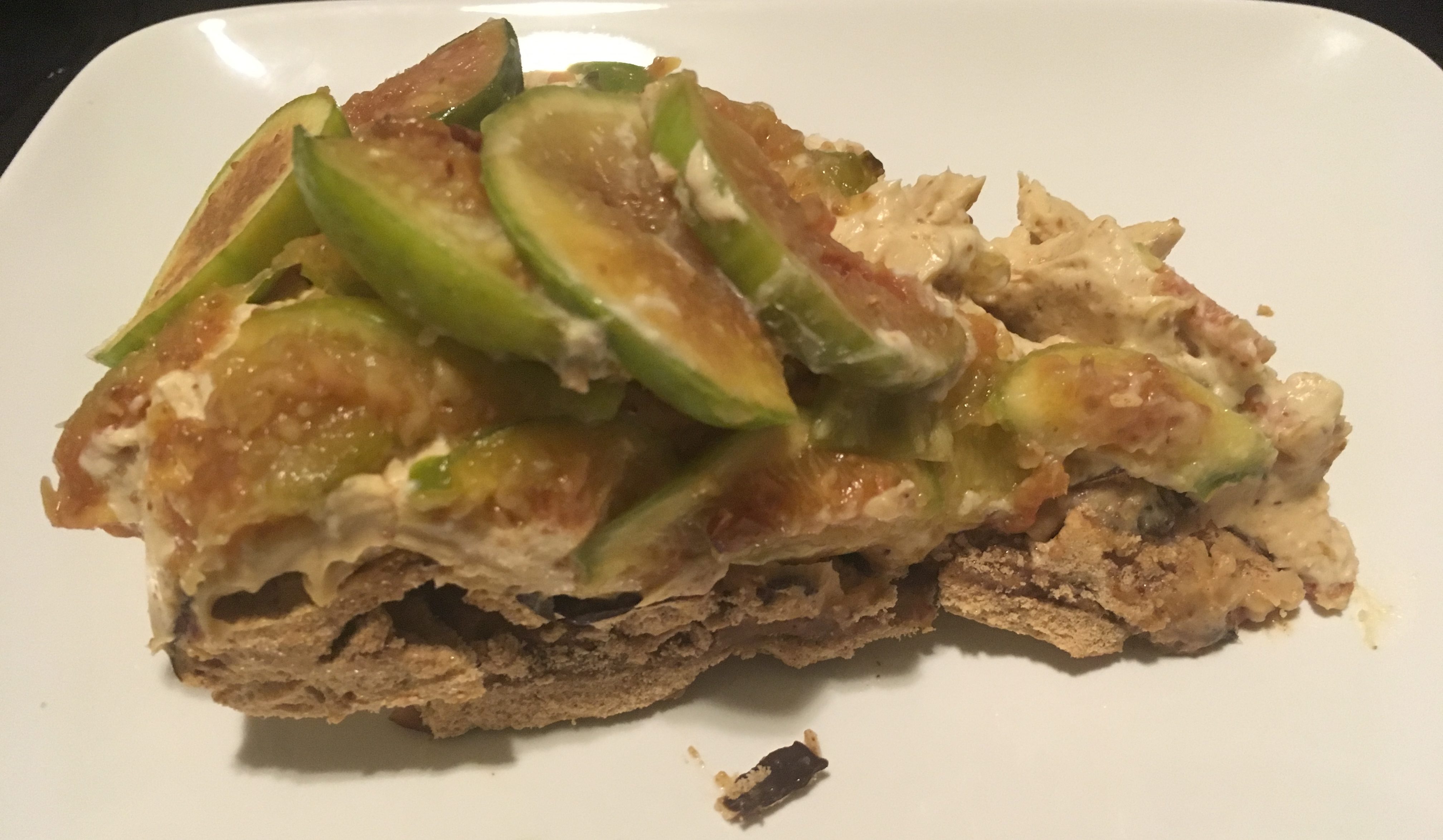 Was it worth it? My guests thought the pavlova was great, and I briefly developed the power to enter people’s dreams as reward for pleasing my baking masters. So yeah, all in all a success.

Effort justification is the idea that if you put a lot of energy into accomplishing something, you’ll convince yourself that the reward was great, like people who insist they loved Infinite Jest. And so I really, really needed these desserts to be brilliant, thinking of when I dropped the vial of vanilla beans and got glass all over my floor, or was up at 1 in the morning waiting for the meringue to finish baking so I could turn off the oven and go to sleep. And the desserts were brilliant, but I wish Sweet included a chapter on emotional support for the whole process.

To make a dessert from this book is to become emotionally invested in a food you prepare in a way that might seem unhealthy. If someone says no thank you when you offer them a portion, remind yourself that it doesn’t make them simple fools with no eye for art who are letting a gift from Ottolenghi and Goh (for which you are the divine conduit) slip through their unworthy fingers. It’s probably not personal.

Plus, expect these desserts to stretch much further than they appear. They’re so rich and complex that they have an amazing ability to make even the lustiest dessert-fiend have a portion or two and decline to keep going. It’s not like making brownies that you shovel into your mouth one after the other to maximize the chocolatiness. There’s subtlety and intensity that we’re not used to as a culture where we can buy Entenmann’s around the corner (not to diss my doughnut fave).

I didn’t make any of the explicitly Jewish or Israeli recipes in the book, though there are plenty, from rugelach, to tahini and halva brownies, to sufganiyot (just in time for Chanukah!). But I’m also far from done with this cookbook that I probably shouldn’t have let into my home, with its corrupting, sugary influence. I’m currently using pantry foods to save the tin cans for a sweet bread recipe in the book which you bake straight into a can.

In short, you can get the book for a loved one as a Chanukah present, but be aware that it’s a somewhat sadistic act. You can get it for yourself, but know that once you have it, you can’t do it halfway. And it may be a lonely road to get others to recognize what you’ve experienced. Surely when Moses saw the back of God he felt alienated from his fellow men. But that is the price to pay to know that you’ve transcended normal dessert, perhaps forever.