The protest of the ZOA brought together an eclectic group. Read More 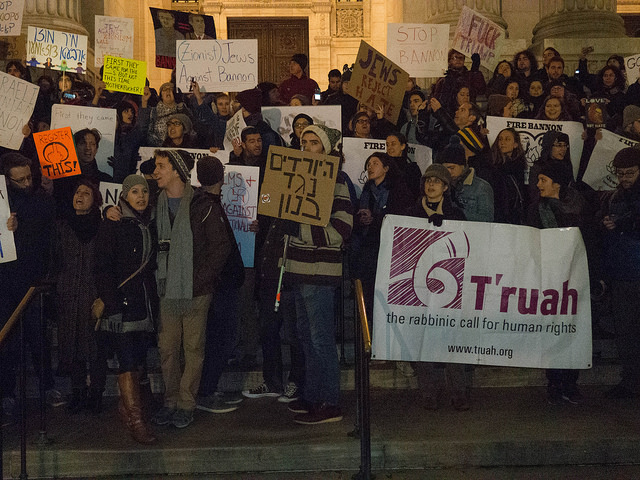 As you might have heard, the Zionist Organization of America invited recent Trump hire (and all-around hateful shmuck) Steve Bannon to speak at their gala last night in Manhattan. In response, hundreds of Jews and allies (including Muslims) protested the event, launching what they called the “New Jewish Resistance.” (It trended on Twitter, so it’s catching.) Bannon was a no-show, though whether or not that was related to the protest was unclear.

But was remarkable wasn’t just how many people showed up, it’s who they were. The Left, Jewish and otherwise, loves to talk about unity when lots of us can’t stand each other for one reason or another. But last night, people who normally avoid being in the same room joined together to march. Honestly, it felt a bit like a pre-Chanukah miracle.

There were four main organizers of the event, and they fell across the spectrum of leftist Jewish activism. T’ruah, for example, is opposed to BDS, and Jewish Voice for Peace supports it. Jews for Racial and Economic Justice remains neutral, saying the issue falls outside their “focus area.” But perhaps the most interesting group was the youngest of the four major organizers: If Not Now.

If Not Now exists to organize all Jews against the Israeli Occupation of Palestinian territories to move existing American Jewish organizations to condemn the Occupation, as well as to stand against anti-Semitism. Sounds simple enough, right?

Well, in theory. Even a friend of mine who attended an If Not Now training expressed skepticism— one umbrella for all anti-Occupation Jews is a mighty big umbrella, spanning from pro-BDS anti-Zionists to liberal Zionists critical of specific Israeli policies and politicians, and an ensuing difference in philosophy on every facet of identity, from religiosity to secular politics. For the brief period the protest was stationed in front of the hotel hosting the ZOA gala (the police threatened the assemblies with arrest if they didn’t keep moving after only a few minutes), the group sang “Hinei Ma Tov,” a song that celebrates Jewish unity. For a moment, that struck me as ironic— we were inherently divided, since one gathering of Jews had come to protest the actions of another. And then, during that song, of all times, a man who had been holding a JVP banner approached a man who was waving a small Israeli flag.

“Do you know what that flag represents?” He asked.

“That I support a Jewish state,” replied the other.

This argument, ensuing during a song about Jewish unity, should have reinforced that there’s a problem here. But the anecdote sticks out because it was the only one I witnessed. Protestors holding Zionist signs marched alongside people wearing BDS pins. Literally every person there had people there with whom they strongly disagree. But finally, after all that big talk, the idea that anti-Semitism, racism, and bigotry are monsters worth fighting before getting to other issues was at the fore.

Despite how scary the current national political climate is, the protest was a reminder that it’s also kind of exciting to see what’s next. And it’s not that the issues of Israeli policy and its relationship with the United States aren’t important and complicated, but the ability to acknowledge that while still fighting a common enemy felt, finally, like more than a line.

How the argument between the two protestors end, as hundreds sang in Hebrew, “Behold, how good and how pleasant it is for brethren to dwell together in unity?”

“In four years,” said one of the men, “We can go back to arguing with one another.”