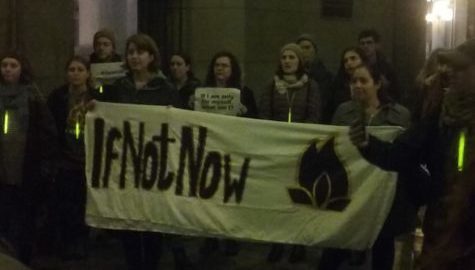 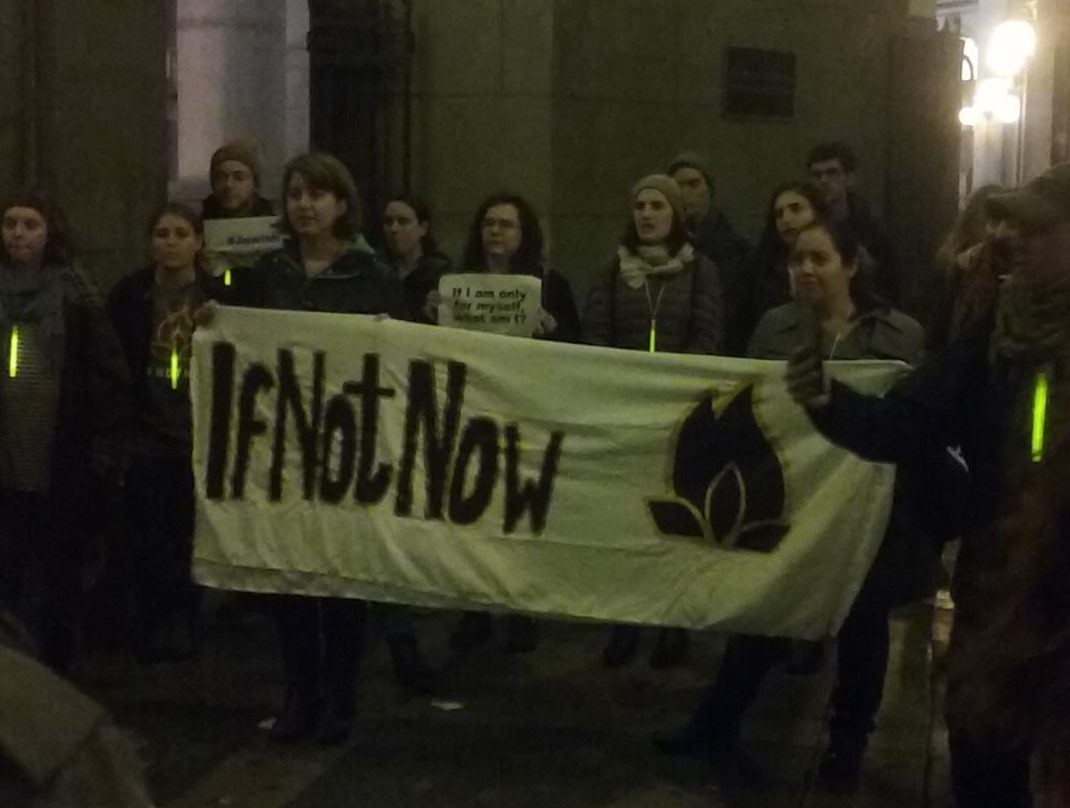 Wednesday was a day of protest. Well, every day these days is a day of protest, but the final day of November was special. Throughout that day, Jews came together under the banner of #JewishResistance to protest Steve Bannon’s appointment and call for his immediate termination as chief strategist. Again, this has been happening since he got the job, but what made November 30 special was its breadth. There were over thirty actions in all, all across the United States, plus a solidarity event in London.

The organizer of this initiative was If Not Now, a grassroots organization of mostly young Jews focused on anti-Occupation work, started in reaction to Operation Protective Edge in 2014. It explicitly calls for an end to American Jewish institutional support for the Israeli occupation of Palestinian territories. So it might seem odd that a group so focused on international affairs has pivoted so neatly to tackle anti-Semitism at home, but on their website, If Not Now explicitly recognizes and stands against anti-Semitism, and notes that even if as few as three of their members recognize a need, they will swarm to meet it. Clearly, they recognized this domestic need, and have organized spectacularly in response.

Rain along the east coast dampened turnout, but New York City carried on. First a small number of activists gathered outside the Birthright headquarters (Birthright is largely funded by Trump donor Sheldon Adelson), and using blue yarn to be reminiscent of the tzitzit, drew a symbolic line.

Which side are you on? This is the question put to our Jewish establishments, who to our chagrin and their shame, continue to either remain silent on Bannon or outright support him, emboldening the white nationalists who harass Jews, Muslims, and People of Color across the nation.

Later that evening, a larger group, about 35 people, gathered at Brooklyn Bridge. No yarn here, but chanting, signs, and singing in Hebrew and English dominated this space. “Which side are you on?,” sang the activists as we all linked hands and stretched out along the pedestrian walkway. We didn’t have the numbers to span the bridge, but we took up space, and made our voices heard.

Jewish protests are a bit different than the others I’ve been to. Singing takes a much greater precedence. Shouting common slogans will occur (“Show me what democracy looks like! This is what democracy looks like!”), but so will songs like Olam Hesed Yibaneh (“Build This World from Love”). Symbolism is common in our culture and religion, and this is just as true in our civic activities— whether it’s blue yarn, or the use of a shofar or gragger (Boo Nazis!).

The police seem to understand that most Jewish protests tend to be low key, or at least the smaller ones do. There were only a handful to watch us gather and then take the bridge, and their body language remained relaxed. The police officers by the bridge were explicit in wishing us well, telling us what to do to avoid traffic issues, and being generally warm towards the group – something that I have not seen be the case for larger protest groups, especially when those groups are majority People of Color. It was surreal, if heartening to see explicit police support. “Good luck out there!”

I don’t know if anyone else saw us— the rain kept many indoors. But we were one protest of many, and this is just the beginning of something much bigger. We’re picking up speed, and hitting the public eye:

See you at the next protest.

David Friedman and the Cardboard Podium

Disappointment at the Protest