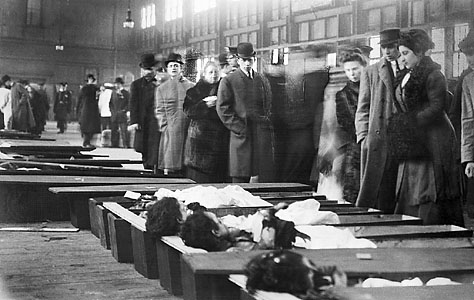 103 years ago today, the Triangle Shirtwaist Fire killed 146 garment workers in New York City. The fire most likely started when an unextinguished match or cigarette butt set a bin of fabric cuttings alight. For the workers inside the building—mostly girls and young women; immigrants from Eastern Europe and Italy—there was no escape: the doors and stairwells of the factory had been locked to prevent unscheduled breaks, trapping them inside. Many jumped to their deaths.

The entire neighborhood is sitting shiva. Every heart is torn in mourning. The human heart is drowning in tears. What a catastrophe! What a dark misfortune!

Have we not written and initiated for weeks, months, years about the risky modern shop buildings with hundreds of young men and women workers who are always in danger for their lives in those buildings? Have we not agitated about these horrible firetraps?

Significant positives did emerge from the tragedy, however, including sweeping labor reforms, the strengthening of the unions, and the enshrinement of workers’ rights in law. But today, in other parts of the world, the conditions that led to the Shirtwaist fire are still the norm—a seemingly necessary part of the developed world’s insatiable demand for cheap, disposable clothing. Writes Kate Stoeffel at The Cut:

Today, more than 97 percent of American garments are imported from countries where our century-old regulations are not adequately enforced, like Bangladesh, the world’s second-largest garment exporter.Bangladesh’s Rana Plaza garment factory was the site of the deadliest accident in the history of the garment industry less than a year ago, when a factory built without a permit—but that passed Western audits—collapsed, killing more than 1,100 people. (More than half of the victims were women.)

Since 2004, volunteers have been chalking the names of the Shirtwaist victims as an annual memorial on the sidewalks of New York, outside the buildings they once called home. The organizers of the event write: “the chalk will wash away but the following year we return, insisting on the memory of these lost young workers.”

You can find a detailed map of the victims’ names, educational materials, and more information about today’s events at the Remember the Triangle Fire Coalition.

And to help to support workers’ rights today, check out this great list of resources courtesy of the good folks at Repair the World.