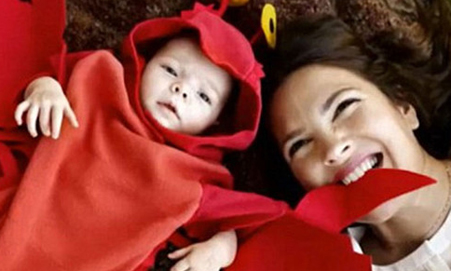 Drew Barrymore visited The View last week and talked about her marriage to Will Kopelman, who she called “a nice Jewish man from a nice Jewish family,” and their nearly four-moth-old daughter, Olive.

“We had a very traditional wedding ceremony with Rabbi Rubenstein,” Barrymore said to laughs from the crowd. “I did the ketubah and we wore the yarmulkes and we were under the chuppah.” There was some confusion among the hosts about the pronunciation of his last name, which means there might be some openings for a new intern over at ABC.

“I’m a shiksa. I do the seders, and we do Passover,” Barrymore explained, adding that daughter Olive will be raised Jewish. “It’s a beautiful faith and I’m so honored to be around it,” she told the hosts, “It’s so family-oriented and beautiful.”

Lance Bass and Michael Turchin Open Up About Interfaith Marriage