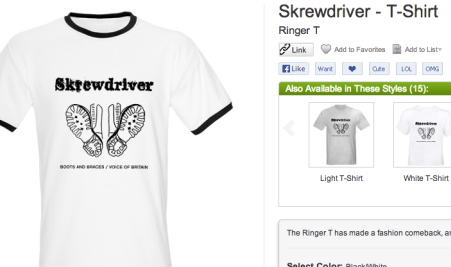 The Cool Band T-Shirt has long been a fashion statement, leading some to believe you’ve got to be so hip if you wear the Ramones proudly on your chest, and others to wonder if the Ramones even know that their name is being mass produced.

Well, Marc by Marc Jacobs seemed to have been upping the ante with its latest, a t-shirt with the signature symbol of Skrewdriver—the most successful Neo-Nazi band in history—for a measly $70. The company recently removed the item from its website, explaining that it hadn’t meant to make any statements, New York Magazine reports.

It has been brought to our attention that the imagery on a T-shirt of ours is similar to that used by a band. We were not trying to make a connection to that band or make a statement of any kind. We have removed the stock of the shirt from our own stores and offer our retail partners the same opportunity.

Still, Gawker reports, CafePress sells the t-shirt with the Skrewdriver name and everything. Now you can look like a Neo-Nazi without even trying.

Got to love fashion.