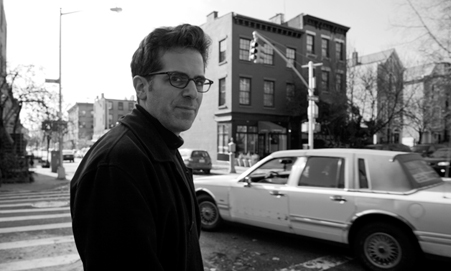 Jonathan Lethem’s latest novel, Dissident Gardens, begins with Jewish housewife Rose Zimmer getting kicked out of the Communist party for having an affair with a black police officer. Rose’s character was loosely based on Lethem’s own grandmother, whom he described as “fearsome.”

I spoke with Lethem over the phone about his latest book, Brooklyn, and why he hates the article headlines on Salon. Lethem is the author of Fortress of Solitude, Chronic City and Motherless Brooklyn, which won the National Book Critic Circle Award in 1999.

What was the genesis of Dissident Gardens?

It originates inversions of my own family history. Mysteries I grew up with, surrounding both my mother and grandmother, who were gone before I could approach them as an adult and demand some accounting or some explanation for things that fascinated me, things that had always been under a pall of legend or silence—in my grandmother’s case, a lot of silence.

My grandmother was a first-generation immigrant. She grew up in the back of a candy store in Brooklyn. She couldn’t be more classic in a way, one of six daughters pointed toward marriage and gentle assimilation, but she was an iconoclast. Without going to college she became self-educated and secularized and politically radicalized and those things separated her from her origins in many ways. Her own separation from the spiritual and intellectual life of her family inaugurated her sense of estrangement or betrayal.

I always knew her as someone with a multiple sense of betrayal in the world: politics had failed her; the Jewish god had failed her and New York city was always on the verge of letting her down. She was very dynamic, very charismatic; I loved being with her, but she was a pretty fearsome human being for a kid to hang with too. [Laughs] There was a mystery in her life: what has she done as a single woman after her husband left her in the forties? I couldn’t name it at the time, but her life was rich and problematic and she was a formidable person. She wasn’t just a grandmother. She wasn’t around for me to really interrogate by the time I could articulate those questions, so instead I wrote a novel and made it all up to satisfy my own sense of fascination.

Hah! What happens when you render intimate parts of your own experience in fiction is that it becomes a formal problem. The novel has demands; the characters suddenly gain a gravity which attracts other kinds of material and so the character divides from life and factuality and becomes something else. The novel is a derivation and a confabulation—it isn’t life itself. As much as you as may fill it up with those feelings at the outset, it becomes something else completely. There isn’t even a question of that kind of satisfaction. I’d only be satisfied if I could hang out with my grandmother again.

One of your characters, Cicero, sort of does that in the novel. As a random segue, I find myself getting lost in your language very easily. Your grasp of language is amazing.

I think that increasingly, in the longer books I’ve written since Motherless Brooklyn, I see part of my assignment, my personal imperative and drive, as a wish to create a sensorium, a diorama of past lives or of worlds that I’ve moved through, friendships I’ve known, environments, cultural experiences. I want to reproduce them; I want to trap them in amber. The wordiness—I can be fairly accused of wordiness by now—it’s really just this trick for creating this enormous machine for reproducing past sensations or lost worlds. I guess that’s become more important to me by far than storytelling per se.

Speaking of lost words, you’ve been equated with Brooklyn. I just moved here. I imagine it’s a much different place now than how you described it in your books.

Oh God. It was changing under my feet when I was growing up. When I returned there in my early thirties, there was a kind of shock confrontation with its early gentrification that I depict in some ways in Fortress of Solitude. That was a galactic change. In the last three or four years it’s changed as much again, in ways beyond my grasp. I’m not there these days. The illusion that I’m somehow the master of this territory or can account for it all is very humbling. The world keeps going and turns out to have nothing to do with your sense of taking it personally [laughs].

You’re quoted in Salon as saying that “the literary world is like high school.” What were you like in high school?

Oh, lord. Salon seems to have a special dedication to finding the very stupidest thing I ever say in any given interview and making it the headline of the piece. That’s their M.O. I suspect I was speaking with the kind of irony that immediately gets stripped from the language the minute it gets put in cold type, especially when it gets put on the Internet. I was musing on the fact that a lot of the machinations and hierarchies and alliance-burnishing and so forth that goes on in the world, including the literary world, is no so different from what you encounter in high school. It’s a truly banal remark, but somehow it ended up sounding like I was claiming it as some fierce throw-down on my colleagues — that’s the power of a headline! “Lethem Avenges Himself Against Bullies Thirty Years Too Late”—there’s a headline for your piece, now run with it. God help me.

Let’s not dwell on this any longer, but please be certain you insert lots of “(laughs)” through your piece. You should scatter that almost randomly amidst my remarks to promote the possibility that I’m being provocative or sarcastic. Listen, seriously—the only important thing to say is I’m very lucky that anyone gives a shit about my work. At any given moment I keep that thought foremost in my mind. Sometimes I forget to incant it aloud, but that’s only because it seems so obvious to me. As for the high school stuff, any “popularity” I suffer or enjoy personally means nothing; it’s not me that’s popular, it’s an image of me that the books drag along behind them through the world. The only purpose of that image is to get the books read. That people read them remains a kind of marvel to me.

So back to the question, were you cool in high school? What were you like as a teenager?

It’s a question I ask myself. How should I know what I was like? I wonder about it. I’ve tried to explore it in my work at times, not just to brandish myself on my own sleeve, but because I’m interested in trying to figure out what I was like. Often I receive conflicting clues from other people’s remarks or my own recollections and I think: who was that? I’ve pursued it in the essays in The Disappointment Artist and in the Talking Heads book, that more or less factual me, as opposed to the totally fictional guises that I wear in a couple of novels. I suspect I was probably pretty angry and also pretty cowardly. [Laughs] I experienced myself as devilishly clever and capable, as moving through the world with a kind of sly sideways power of access and insight that none of my behavior would have given evidence of. The inside and outside of the teenage container are two very different things.

You have an almost encyclopedic knowledge of random topics that comes across in your book.

It’s done out of love. I’m the sort of person who traffics in the statistics on the back of the baseball card but it’s not really about that stuff, it’s just articulating some sort of emotional arrow pointing from me to the thing. If you see me flipping around a lot of obscure trivia—”here’s the guy who was playing guitar on Smokey Robinson’s records even though he’s not credited”—it just means my heart falls out of my chest when I hear “I Second That Emotion”. It comes from caring so much that I’m trying to manage the sensation by becoming an expert on the topic. I couldn’t be bothered to know about stuff that doesn’t move me. It’s not like I have any really area of expertise outside my passions. Passions may not be the right word for this stuff—for my emotional cruxes, things that perturb me or reach into me.

What do you mean by having your “heart fall out of your chest?”

There’s something about the way that some things speak to me that I never get over entirely. Plenty of things speak to you once, but some of them, many of them, complete their enunciation: you get it and it’s just a nice song or you forget about it. Other things stir you and can’t ever be finished—those are the things that I find I’ve been very well rewarded by paying close attention to. Whether it’s the squares of slate on sidewalk on Dean Street or a Smokey Robinson song.

Do you find that mainly connected to your childhood?

Of course but it can also still happen. I’m not some sort of finished set of issues, a door that closed when I was seventeen. I believe that I remain eligible to have the world speak to me in that way. I’d like to think so.

Michael Orbach is a writer living in New York.