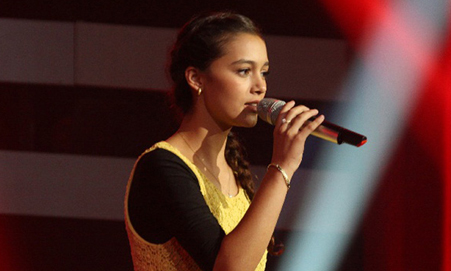 Over at Tablet, Liel Leibovitz has an excellent recap of the unlikely drama caused by 17-year-old Ofir Ben Sheetrit’s successful audition on the Israeli version of The Voice—the Orthodox high school student got suspended from school, and gained national attention:

It was a perfect TV moment, but very soon it became something far more meaningful. Ben Sheetrit’s school, incensed that their student had flouted the stricture forbidding religious women to sing in public and the prohibition against touching members of the opposite sex, suspended her for two weeks. Reality television being more popular in Israel than any other human pursuit, the suspension soon made front-page news.

Reluctant to embrace her new-found status as a rebel with a golden voice, Ben Sheetrit explained in an interview that she was accepting her suspension. “I understood that what I did was against the spirit of the ulpana,” she said, “and didn’t want to create an opening for other girls to do the same. The punishment is symbolic.” Her meek protestations, however, were largely ignored. Ben Sheetrit has become the newest focal point of one of Israeli society’s oldest and most bitter struggles, the ever-growing rift between an increasingly stringent Orthodoxy and a combative secular majority wary of religious extremism. Caught in the middle of this culture war is a large swath of religious Jews who feel at home in both worlds and who want to live a traditional, observant life without subscribing to the strictest of rabbinic interpretations. To these Israelis, Ben Sheetrit is a heroine.

Here’s Ben Sheetrit’s audition, which school officials may have hated but the judges loved:

An Orthodox Star Is Born [Tablet]

Ding Ding Ding! We Have a Jewish Bachelorette!