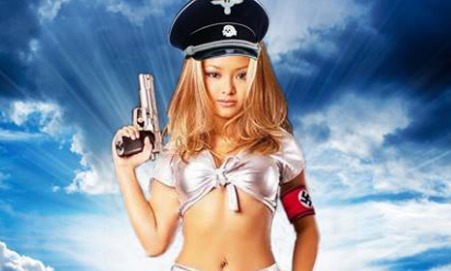 Unless you’ve been living under a rock, you’ve heard that Tila Tequila, the MySpace sensation turned reality star (remember A Shot at Love?), who announced she had converted to Judaism in 2012, has a new alias: Hitila. That’s right. As Liel Liebowitz reported on our sister site, Tablet Magazine, earlier this week, Tequila declared on her blog that having been rejected by the Jews, she is now a Hitler sympathizer.

To drive the point home, Tequila posted an elaborate illustration of herself as sexy Hitler, practically straddling the Auschwitz-Birkenau concentration camp on her Facebook page. It has since been removed, but not before being circulated throughout the World Wide Web.

Tequila even wrote a song reflecting on her new alter ego and worldview, drawing from those old school, anti-Semitic conspiracy theories.

Every time you hear my name it’s going down, goin down X 4
Feeding yo mind with GMOs
while givin yo babies flo flo
not flo rida but flo ride
that shit that burns yo third eye
Jewluminati motherfuckers hate me
Oh no they don’t wanna date me
Nor you nor you nor you too
Worldwide Genocide blame it on the jews

So now they call me a nazi
no bitch I’m just good at yhatzee
Espionage is my middle name HA!
I got you good while rolling through yo hood
Hitler no Hi Tila
Hitler no Hit Tila
Hitler No Hi Tila

Well, Tony Ortega at Raw Story decided to check in with the peeps at the white supremacist forum Stormfront, many of whom are apparently quite pleased to win Tequila as an ally. Other reactions ranged from confused to suspicious of the Vietnamese-Jew-turned-Hitler (shocker: Nazis are not too keen on Asian American’s either!). Ortega kindly compiled a list of responses for us, so that we don’t give those hateful bastards any more web traffic than they already have. It’s worth a read:

“It’s insulting to Adolf Hitler to have that promiscuous, degenerate, mongrel defending him. She makes me want to vomit.”

“The sad part is this no one will listen to her.”

“I congratulate her for finding the truth.”

“Brave woman to throw her career away for truth. Jew Hollywood and media will never hire her again.”

“Very, very strange. Her entry almost seems copied and pasted from this website. I wonder if she wasn’t somehow ‘encouraged’ — either overtly or covertly — to promulgate this information in an attempt to discredit it. I, for one, am quite skeptical.”

“She sounds perfectly lucid to me.”

“We need more people like her spreading this type of message. As long she does not preach racial mixing, has no kids, and eventually commits suicide, it is all good.”

“She’s got 2 million followers. People will listen to her. The Zionist veneer is finally crumbling.”

“I posted a supportive comment on the page. I think we all should to show her that she is not alone in her beliefs.”

“Is she of Jewish racial ancestry?”