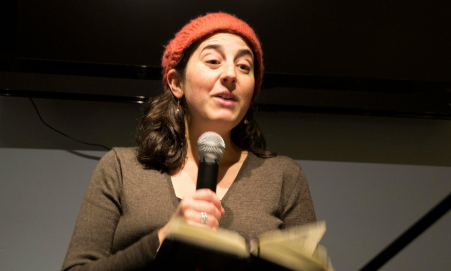 “There’s a story told in the book of Maccabees about a heroic warrior named Eleazar. Eleazar valiantly plunged his sword into the belly of the enemy elephant, guaranteeing his own death under the crushing weight of the fallen beast and winning an eternal emotional victory. There is a story told in the scroll of Antiochus about a warrior named Eleazar. Eleazar fought the elephant, and yes, he fell in battle, but no, there was no glory. His body was found hours later drowned in elephant poop. My friends, the story of Eleazar is Hanukkah. Hanukkah is the story of Eleazar. They are one and the same. They both look nice at first, but when you look again, you see they’re full of shit.”

So began Josh Cooper’s sermon on November 22 in a small cafe in Philadelphia.

It was the first SermonSlam event, and Cooper, a senior at the University of Pennsylvania, was one of eight slammers. Their instructions? Speak about anything that is loosely connected to Hanukkah for five minutes or less.

Cooper decided to talk about his ambivalent relationship with Hanukkah, stemming from the numerous lies that led up to the traditions. Elan Kiderman interpreted the theme a bit more loosely than the other speakers, speaking of a time when he experienced his own miracle. Akiva Sanders discussed the hidden power of the dreidel, and Marley Weiner shared what it was like to celebrate Hanukkah in an interfaith home.

Mirrored after poetry slams and The Moth podcast, SermonSlam is a new project from OpenQuorum, a Jewish public media platform devoted to curating, creating, and distributing content. SermonSlam is meant to be an outlet for creative Jewish expression, one that is accessible to Jews around the world.

“The idea was just a way to allow people who care about Jewish ideas to express that in a way that’s fun and also allows for variety,” said David Zvi Kalman, one of the founders of SermonSlam and OpenQuorum. “The idea is that divrei Torah, sermons, very often are given in the context of some other service. You never go somewhere just to hear a sermon, but you go somewhere to go to shul and in the process a sermon is given. The idea was to highlight all of the wonderful things about giving over pieces of Torah by letting people be as creative as possible, giving people a wide array of formats.”

After holding the first SermonSlam in Philadelphia, Kalman posted a few of the sermons online and created an iTunes podcast. Within a week, SermonSlam was the No.1 Jewish podcast on iTunes, and Jews from around the world have emailed Kalman asking for SermonSlam to come their city.

The next SermonSlam is set for January 22 in New York City, and there are talks of even hosting one in Jerusalem, too.

Kalman finds that compelling Jewish thought can often be bound to certain locations and take on an almost exclusive aura.

“I think right now it’s often difficult to find inspiring Torah that is compelling to listen to online,” Kalman said. “You have to kind of be there, in a yeshiva, in some setting. The idea of SermonSlam and OpenQuorum, in general, is to create content online that serves to bring to people Torah that they would not have otherwise, to make it interesting and entertaining all at the same time.

“So bringing it online, we’re trying to say look at all this amazing stuff out there to change the perspective of the way that Torah is being developed today. There’s a great wealth of it, it’s just unevenly distributed.”

Rebecca Borison, a recent graduate of the University of Pennsylvania, is currently living the life of a New York writer. You can follow Rebecca at @borisonr.