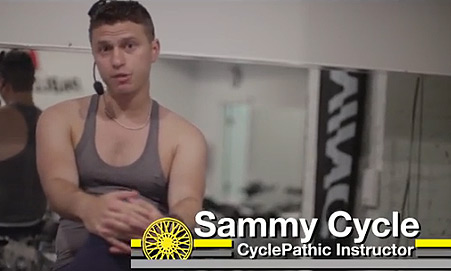 Things have sort of spiraled out of control ever since a guy who calls himself Fat Jew taught a spin class to homeless people on Citi Bikes in June. Today we meet Sammy Cycle, lead instructor at CyclePathic, who says things like “Spinning is great because sometimes you want to bike, but you don’t want to pass poor people on the street.”

Sammy Cycle (“You’ve heard of Lance Armstrong? I’m Dance Armstrong”) is really Evan Krumholz, a Long Island native whose past work includes Semitic-centric parodies like “Nassau (County) State of Mind.” His latest doesn’t compare to the workout video New Girl actor Max Greenfield filmed in character as Schmidt (though we admittedly have a pro-Schmidt bias around here; he was the inaugural feature in our Network Jews series), but it’s probably the only time you’re going to see a spin class pedaling to “Oyfn Pripetchik” from Schindler’s List.