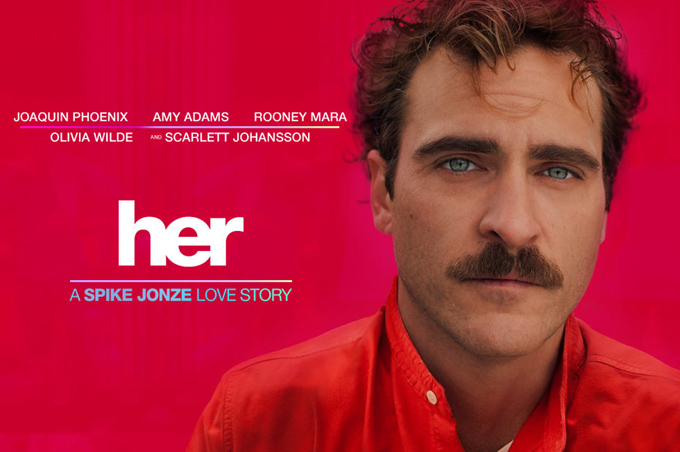 What used to be a sci-fi nerd’s far-out dream is now a bonafide and frightening possibility: human-robot love. Although sex and true romance between a human and a machine (that may one day look human?) is a weird situation to ponder, narratives like Spike Jonze’s new futuristic love story, Her, will probably make you do just that.

Starring the crazy, talented Joaquin Phoenix alongside Scarlett Johansson, in the form of a computer operating system (think Siri with a more soothing intonation), Her explores the boundaries and lack-there-of in a world where digital reality is beginning to merge, and overshadow, our physical world.

Scientists have been working towards sentient robots for years, and research has shown that humans’ love for robots (think Tamagotchi, Furby) may be hardwired in the brain. Maybe because you view a robot as some sort of pet, it becomes something you feel ownership of–therefore making it more alluring? Ew. I’m not sure.

In a recent New York Times article based on the story line of Her, the writer tells of the sex-like scene in the film where Joaquin Phoenix’s character, Theodore, verbally tells Samantha the robot what he’d like to do to her, if only she were real, I suppose.

“This may sound like futuristic sci-fi dystopia to some, but such sexual-techno prospects are increasingly the here and now.”

The piece goes on to list a number of sex toys that are increasingly “robo-like,” and on their way to further clouding the human sexual experience, including: RealTouch, a USB-connected sex toy that promises interactive sex, and Fundawear, a pair of his/her underpants with vibrating nodes that can be remotely activated by an iPhone.

Below is the trailer for “Her,” which is currently in theaters. If you are not piqued by human-robot love and our species’ complicated relationship with technology, at least go to see Joaquin masterfully “work” his retro high-wasted trousers.