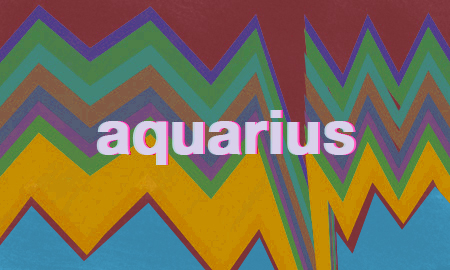 Ruled by wild and erratic Uranus, Aquarians are associated with inspiration and originality. Your symbol, the water-bearer, is a bit misleading—you’re not, in fact, a water sign, but rather an air sign. But unlike fellow air signs Libra and Gemini, Aquarius is a fixed sign, meaning you possess the intellectual acumen and curiosity of the others but aren’t nearly as mercurial.

Aquarius is also the sign of contradictions. Before the discovery of Uranus in 1781, Saturn was your ruler, representing order and conformity. Uranus, with its unusual rotation and orbit, rules rebellion, risk, and individuality. The planet is associated with invention and innovation, as well as a latent ability to perceive the future—which is what it means to be at the dawning of the Age of Aquarius.

Aquarians are patient, intuitive, devoted, and dependable, yet drawn to the unconventional. Your clear-headed determination and knack for reason make you an excellent reformer. But your detachment from your emotions and dispassionate approach to relationships—as well as your keen memory for detail—often cause you to hold grudges. Your understanding of human nature runs the risk of being purely intellectual. Feh!

The new moon in your sign on February 9 favors innovation, exploration of the unknown, and experimentation. With Saturn in retrograde from February 18 until July 8, consider reexamining any outmoded ways of thinking and dealing with unfinished business—you can do so much more than you thought possible. The love planet Venus is in your sign until February 25th, so expect the thrills of freedom and independence. You might not find your beshert in time for Valentine’s Day, but some trial and error may be enough to awaken those dormant romantic impulses.

PISCES (FEBRUARY 21-MARCH 20): Things may get worse before they get better—Aider es kumt di nechomeh, ken oisgaien di neshomeh. Mars and Mercury move into your sign in February, making compassion and dreaming the order of the day. Pisces can be gluttons for punishment, but if you stand up for yourself without equivocating, the people you need most will rush to your side in solidarity.

ARIES (MARCH 21-APRIL 20): It seems like the universe is conspiring to put all of your plans on the back burner. During February your ruling planet Mars will be transiting through Pisces, the planet of compassion and empathy, which doesn’t exactly jive well with your typical warrior stance. However, ven men darf hoben moiach, helft nit kain koiach—when brains are needed, brawn won’t help.

TAURUS (APRIL 21-MAY 20): You may be feeling cautious in romantic pursuits for fear of rejection, making your prospects appear stalled and limited. But reality is more of a give-and-take than you realized. Before you can experience mekheye, you’ll need do some serious assessment about what you really want out of love.

GEMINI (MAY 21-JUNE 20): While you’ve been trying to focus on your career, mental Mercury’s move into Pisces on February 5 ignites your fantasies and dreams. Practicality may seem boring—if not hazardous—but rather than voglen (wander around aimlessly), be honest with yourself and others about what’s going on in that head of yours.

CANCER (JUNE 21-JULY 20): Cosmic energies are insisting that you broaden your horizons. So ease up and let yourself go—your sanctimonious tendencies often push others away. An epiphanic moment may be in store for you, transforming the way you view your place in the universe.

LEO (JULY 21-AUGUST 20): Although it seems like everything is working against you right now, this trial by fire could be a blessing in disguise. While domestic matters may take center stage, you’ll be strengthened by the realization that you’re a light that won’t go out. You’re the richtiker chaifetz (the real McCoy), you feisty felines—just hang in there and the method to this madness will eventually reveal itself.

VIRGO (AUGUST 21-SEPTEMBER 20): As charming as you can be, you’re often guilty of haken a chainik (talking for the sake of talking). The only way to get close to people is to interact with mutual regard and empathy. Try listening for a change and the rest will follow.

LIBRA (SEPTEMBER 21-OCTOBER 20): A wise man once said, “the world is a tragedy to those who feel, but a comedy to those who think.” Since Libra is the sign of balance, you would do well to find a way to mediate between thinking and feeling. After all, heaven and hell can both be had in this world—ganaiden un gehenem ken men baideh hoben oif der velt.

SCORPIO (OCTOBER 21-NOVEMBER 20): You’ve been oysgemutshet (worked to death, tired out) for far too long. Don’t hate the player, hate the game: examine the source of your frustration. The truth has many faces—der emess hot a sach ponimer—and admitting that the past just isn’t through with you will help you make the changes you need for a brighter future.

SAGITTARIUS (NOVEMBER 21–DECEMBER 20): Freud interpreted the dual nature of Sagittarius as the ego’s way of navigating the warring id and superego. For fiery Sagittarians, it is often oder gor oder gornit (all or nothing). Rather than force something that just wasn’t meant to be, try to rise above the shtuss and learn to love the dueling sides of yourself.

CAPRICORN (DECEMBER 21–JANUARY 20): With your ruling planet Saturn in retrograde from February 18 to July 8 and planets moving out of your sign, you may feel a particular sense of loss and confusion. For now, focus on your health—mental, spiritual, physical—rather than gesunte tzores. Gather your strength, for soon you’ll regain equilibrium.