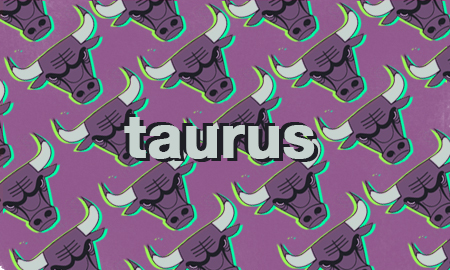 Far an akshen iz kain refueh nito: For the disease of stubbornness there is no cure.

TAURUS (APRIL 21- MAY 20): Taurus, the bull, is a fixed earth sign, often depicted with its horns pointing upward toward God. These ‘horns of the law,’ confer the Taurean bull with godly power and moral authority. Taurus is an important sign during Shavuot, the festival of the giving of the Torah, as Kabbalists believed Taurus to represent the law of the Torah. Furthermore, the four rivers of the Garden of Eden are thought to represent the four fixed signs: Taurus, Leo, Scorpio, Aquarius.

Taurus is ruled by Venus, the goddess of love. As Taurus extraordinaire William Shakespeare wrote in Twelfth Night, “Shall we set about revels? What shall we do else? Were we not born under Taurus?” Often thought to be hedonistic fools for love, due to both a love of pleasure and material delights, Tauruses often need someone to take them by the horns.

Tauruses are substantial, practical, lovers of luxury, bluntly direct, and sensuous. You have the power to heal and soothe others, and are hypothetically relaxed yourself—but strong currents of nervousness run below the surface. Although you are usually reserved, you can be pushy, with a tendency toward backseat driving if you think you know what’s best for others. You would do well to me darf leben un lozen leben—live and let live. As your fellow Taurus Barbra Streisand says in Yentl, “Why is it people who want the truth never believe it when they hear it?”

Taurus governs the throat and neck; that is, you serve the head (ruled by Aries) and can be quite obedient, prefering to wait for something than to run after it. Although you are uncomfortable taking risks, you have great determination to stick to a course of action. This is usually a good thing, but can mean you obstinately refuse to change. Ask advice from everyone, but act with your own mind: Barat zich mit vemen du vilst; un tu miten aigenem saichel.

Mars in Taurus from April 20 to May 31 will give reinforce your bullish strength, while Mercury in Taurus from May 1 to May 15, will help you focus your mental energy on the material, earthly things. Now is the time to make way for new ideas, which will come in handy when Mercury enters its home sign, Gemini, from May 15 to May 31.

GEMINI (MAY 21-JUNE 20): Take comfort in the fact that planets will be moving into your sign in the coming weeks. However, be careful with your words when Mercury moves from Taurus to Gemini, one of its home signs, on May 15. You’ll feel a sudden jolt in your imagination, which has heretofore been a bit farshluggineh (literally, shaken or mixed). Use this energy wisely. Gemini rules talk and news (read: gossip), but don’t let your inner yenta get the best of you.

CANCER (JUNE 21-JULY 20): Cancers, ruled by the moon, are often emotional and moody—if not downright pessimistic. Just when it seems like life is adding up to bupkis (absolutely nothing), the new moon Eclipse in Taurus on May 9 will help bring you back down to earth. There’s a difference between being realistic and giving yourself over to needless suffering! Meanwhile, avoid any major commitments (signing a contract, etc.) for the time being; wait until closer to the middle of the month to tie up loose ends.

LEO (JULY 21-AUGUST 20): What can be said about Leo that hasn’t already been said about America’s Next Top Model? You regal beasts are fierce! Not that there’s anything wrong with that—and to you flashy Leos that’s nisht geshtoygen, nisht gefloygen (neither here nor there; it doesn’t matter). You’ve been in a fugue for far too long, now is your time to shine. Ruled as you are by the sun, you should take pride in the fact that you were put on this earth to give light—and your creative force can do just that.

VIRGO (AUGUST 21-SEPTEMBER 20): You think you know what’s best for everyone? You muttelmessig (meddlesome person, kibbitzer) Virgos can be so pushy! Der kluger bahalt dem saichel; der nar veist zein narishkeit (a wise man conceals his intelligence; the fool displays his foolishness), and it would be wise for you to keep your advice to yourself for once. With your ruling sign, Mercury, in Gemini (also ruled by Mercury) from May 15 to May 31, try to reign in your desire to tell people what they should be doing. Instead, with Venus entering Gemini on June 1, tell them how they make your life more bearable!

LIBRA (SEPTEMBER 21-OCTOBER 20): Libras are guilty of being almost too forgiving of others—letting people walk all over you for fear of changing the fabric of your life. You may be a yiddisher kop (smart person), but the shtuss (a minor annoyance that arises from nonsense) you’ve put up with makes you seem like you’re dangerously close to becoming the ill-fated schlimazel. On May 9, the new moon eclipse in Taurus offers you a chance to start a new chapter in your life. Whether this means relocation or finally putting your foot down, stand up for yourself and how you want your life to proceed.

SCORPIO (OCTOBER 21-NOVEMBER 20): The full moon lunar eclipse in your sign on April 25 had you waiting on tenterhooks. As always, Scorpio assumes vos veyniker men ret, alts gezinter iz (the less said, the better – lit., the less you speak, the healthier). Your ruling planet Pluto’s continuing retrograde isn’t helping much to get you out of hiding. However, Scorpio boasts two out of the three Beastie Boys (MCA, may he rest in peace, was a Leo) giving you extra incentive to fight for your right to party!

SAGITTARIUS (NOVEMBER 21-DECEMBER 20): Everyone knows the old adage that those who don’t know history are doomed to repeat it, nu? With your ruling planet Jupiter in Gemini, which is considered to be quite lucky, you will find resolving tense issues from the past much easier. Make the most of it! However, because Sagittarians require a great deal of freedom, you may find working on relationships alle ziben glicken (not what it’s cracked up to be; lit. all seven lucky things). Fuhgeddaboutit! Relationships will be a big focus this year—while the grass is always greener, try to stay positive about what you’ve got.

CAPRICORN (DECEMBER 21- JANUARY 20): Take a cue from David Bowie, the Capricorn glam king chochem (genius): turn and face the strange changes. While may be consistently rockin’, you never know what life will throw your way—but you can prepare yourself for the possibilities. Az me muz, ken men: when one must, one can! Since you can’t fight change, continue to work on resolving past issues. for you capricious Capricorns, di shversteh arbet iz arumtsugain laidik: the hardest work is to go idle.

AQUARIUS (JANUARY 21- FEBRUARY 20): Deigeh nisht: don’t worry so much, Aquarius! It’s time to put on your dancing shoes—the energy on May 18 is favorable for finally letting loose! Venus, the planet of love, forming a favorable angle with your ruling planet Uranus heralds the possibility of a surprising night of fun! Although you Aquarians are turned off by anything too shmaltzy, you can still mach a leben (have fun) and still be true to yourself

PISCES (FEBRUARY 21-MARCH 20): Because your head is often in the clouds, you are prone to taking bubba meisah (old wives tales) too literally. Before you spit three times (to ward off the evil eye), take a look at what’s in front of you. Although the other signs of the zodiac could take imagination lessons from you, it can become dangerous if you close yourself off to reality completely. Spend too much of your time contemplating yeneh velt (the other world; the world to come), and you’ll miss the best that this world has to offer.

ARIES (MARCH 21-APRIL 20): With your ruling planet Mars in Taurus from April 20 to May 31, your impulsiveness will slow down considerably. However, it will be replaced with stamina and endurance. Trigger-happy though you may be at any other time of the year, now you will be forced to consider the consequences of your actions. Men iz dir moichel di t’shuveh, nor tu nit di avaireh: never mind the remorse, don’t commit the sin!