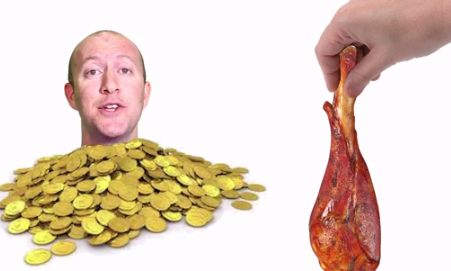 Jewish parody videos are nothing new. In the beginning, God created the Maccabeats’ Candlelight video set to the tune of Taio Cruz’s “Dynamite,” perhaps the catchiest Hanukkah anthem ever. Then, Agent K Media graced us with a raunchy LMFAO spin, informing the interwebs that “he’s Jewish and he knows it.”

But this year, the Jewish holiday parody is back with a vengeance. Sick and tired of Hanukkah being perpetually outshone by Christmas, the Jews are finally getting theirs: a once in a lifetime, super-holiday, Thanksgivukkah. And we will not shut up about it! Those shopping mall carols have got nothing on the overload of irritating Thanksgivukkah parodies that are spamming up Facebook newsfeeds everywhere.

Here is a Jewcy countdown for the Top Five Most Annoying Thanksgivukkah Parodies:

1. “Oils,” a play on Lorde’s hit, is a great way to immortalize the fantastical holiday. And, it comes at the heels of the slightly creepy pro-circumcision spoof, “Mohels.” Now you’ll never get that damn song out of your head.

2. In this video, you will see Benji Lovitt’s singing head superimposed on Star Wars characters, Popeye’s Olive Oyl, some pilgrims, and the cast of Eight is Enough, as he tells the Thanksgivukkah story to the tune of Don McLean’s “American Pie.” You’d better watch it because he’s “about to cry from Jewish and American pride.”

3. Then there is that epic Manischewitz Thanksgivukkah rap battle. A classic, in which Hanukkah and Thanksgiving face-off for sovereignty over November 28th. Cute, Manischewitz, but that still doesn’t change the fact that your wine tastes like cough syrup.

4. The puppet band, Buba Myses, explores what happens when a non-Jew accidentally happens upon a Thanksgivukkah celebration and is bombarded with dreidels, latkes, and singing puppets in an adaptation of Will.i.am and Britney Spears’ “Scream & Shout.” YOU CAN’T LOOK AWAY. Trust me.

5. Finally, this parody is closer to resembling what many of our Thanksgivukkahs will actually look like. This sweet crooning couple (Gil and Margie Brodsky) could easily be your parents, and that menorah, with the turkey tangled in its branches— a likely Thanksgivukkah centerpiece.

Sing it with me, now:

Thanksgivukkah, Thanksgivukkah,
Come light the menurkey
Let’s have a party
With latkes and turkey
Maccabees and Pilgrims
Americans and Jews
Thankfulness and freedom—
The lessons we choose.