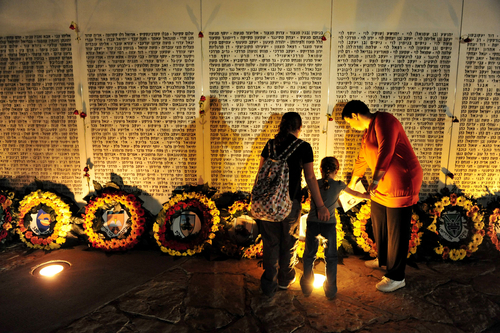 Is a memory something you have or something you’ve lost? – Woody Allen (Spoken by Gena Rowlands (as Marion) in ‘Another Woman’)

Today we think of who we do not have and why, and then what that lack demands of us.

Tomorrow, about how we celebrate being alive to meet those demands.

Today is Memorial Day in Israel, honoring fallen soldiers and victims of terror, observed here a day before Independence Day. The connection is essential since it is widely recognized that without the former, celebrating the latter would be impossible, while always hoping that one day, this will not be the case. That there will be no more names on next year’s list of the fallen. It is, in other words, a sacred day we wish with all our hearts we didn’t need to observe, and in fact grapple with its necessity all the time.

Here’s something I wrote about potential loss and war when my husband was commanding an APC in Lebanon II. I was essentially the least supportive war wife ever, because I didn’t believe in the war. I later learned, from the Disney franchise of all places, that Hassan Nasrallah was counting on people like me to behave exactly as I did. (What does Disney have to do with the IDF and Hezbollah? Think Mufasa / Scar / Simba / Pridelands / Hakuna Matata / Circle of Life… Or just read the essay.)

In any event, Israel is not quite Western and also has a very small population – death by war is not something distant and abstract, since everyone has either lost someone or knows someone who has. As such, there are no Memorial Day sales and no Memorial Day home games and no Memorial Day picnics. There are, instead (not in addition), countless public ceremonies, school observances, lots of sad TV documentaries (and little else on) and public moments of silence when traffic stops all along the nation’s highways. It’s not a case where some of the country mourns its fallen sons and daughters and some of the country shops or watches baseball.

Memory is pervasive around here, fraught. It is as much something as it is a lack of something.

The mood shifts dramatically sometime around 5 pm, as people get ready for Independence Day, an out and out celebration, complete with picnics, barbecues, parties, fireworks, etc. Much like the Fourth of July.

It seems that Israeli memory is about a conscious decision to always be remembering and forgetting all the time, in the same instant, a constant argument between absence and presence that sometimes results in the type of massive virtual memory overload that can causes one to freeze. Independence Day is, to continue that metaphor, like one big national reboot.

In truth, I sometimes miss the days of memory being something you celebrate at Macy’s, unless, of course, you had someone die in Vietnam or Iraq, in which case your day might look a little Israeli.

In any event, this silence and seriousness and restraint and celebration of life that nearly everyone does around here is very intense and it makes me want to hide some days.

But then I forget that I need to. Memory is like that.

This post originally appeared on The Word Well and is reprinted with permission.

Freelance writer, editor, and webcontent consultant. Also known as @SarKE. Blogs at www.the-word-well.com . On which the rest of the below profile questions are answered. If anyone is still reading this.