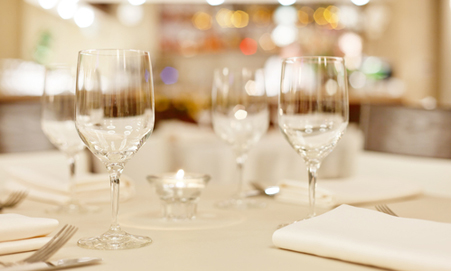 Two weeks ago, somewhere in our nation’s capital, seven young Jewish men and seven young Jewish women got together for a Shabbat dinner. But it wasn’t just any dinner—it was the now infamous Craigslist Shabbat dinner, organized by seven very confident young Jews who took to the ultimate online personals section to find their besherts. We spoke with Elissa*, one of the seven lucky “chosen” female attendees, about her experience.

So, you’re a chosen ‘chosen one’—mazel tov. How did you find the Craigslist ad? And why did you decide to apply?

I honestly thought the entire thing was a joke. I’m fairly incompetent using the Internet (I just found out that there were articles written about this before it happened), and when my former college roommate posted this on my Facebook wall, I thought, ‘How ridiculous.’ He (ah, liberal arts education) and I decided to apply purely out of curiosity and because we thought it would be hilarious. Never did I ever think this would actually take place, that I would be invited to join, or that I would go. I’ve never met anybody on the Internet (I meet enough creeps in real life), I’ve never been on a blind date, and I’ve never dated an American Jew. So this was way out of my comfort zone.

How long did you spend on your application? Did you take it seriously or just fire something off?

It probably took me longer to read the posting than to write a response. My ‘application’ began with “Dear circumcised gentlemen” and ended with “Pick me and make my bubbe kvell.” I used Maimonides and Zach Braff in the same sentence and told them they better not be schmucks. They asked for a picture so I sent one of me at a prayerbook vending machine in Jerusalem.

How did you find out you were selected?

A few days later, I got the ‘acceptance’ email:

Following strip bingo night with the local Hadassah chapter, we carefully reviewed your application, engaged in Talmudic discussion over the merits of your presence at our Shabbat dinner table, and Googled the hell out of you.

On behalf of Seven White Single Jewish Males, I’d like to stomp on a glass and wish you a Mazel Tov! You are officially one of the seven chosen people.

The challah is practically in the oven, the gefilte fish are swimming about, the Manischewitz is on ice, and you’ll want to give up your birthright for this lentil soup. We just need to know by noon tomorrow, how much herring to cover in wine sauce.

Also, if you have any food allergies or dietary restrictions, please let us know too. For the sake of inclusion, all food will be kosher.

We also trust that you will use your discretion, and keep this in the family (of 14).

This invitation is non-transferrable, unless you are transferring it to Bar Refaeli or Elena Kagan.

Clearly, I’m not keeping this in ‘the family’ (that’s how Jewish genetic diseases started, after all), but this whole experience was too absurd not to share.

So how did the actual event go down?

I love a good story and routinely get myself into strange predicaments, but I truly didn’t know how to handle this and was debating whether or not I should go. It started to get even more surreal as the plans were being made. The guys were extremely vague and secretive in their communication with us. They continued using the alias David Ben Gurion and waited until the last minute to provide us with an address (they were contacted by several media sources and were understandably worried about guests showing up to the dinner unwelcome), and I started to get freaked out.

I demanded that they meet me in a public place first (it turned out that I was the only one with this requirement), and established a “safe word” with a friend who, if I called or texted, would either come to my rescue or notify the authorities. Not to be outdone, the father of one of the chosen Jewesses even hired a bodyguard to be on call a few blocks from our location. I was still extremely anxious (it’s part of my heritage, okay?), although the guys did their best to quell my fears before the event. Their mothers clearly raised them right.

The dinner took place at a very nice apartment, and at first we just sat around having drinks and discussing the absurdity of the situation. Our hosts admitted they sifted through hundreds of responses to the ad—one enthusiastic woman offered to fly in from the Midwest and a group of “Protestant Princesses” even reached out to them. It was kind of a hilarious ego boost, except that I learned just how much they gleaned from a simple Google search of my name. Excuse me while I reconsider my relationship with the Internet.

According to the ad, the group of male hosts included five good-looking guys and two ugly guys. Was that true?

Well, disappointingly, there were only five guys there—two of them ended up not being able to make it—and six of us Jewesses (one bailed at the last minute). We joked that it was the ugly guys who had dropped out. One particular guy and I had our differences: he made a joke early on about it being good that we had all met on “Craigslist and not Schindler’s list,” to which I responded, “Too soon.” From that moment on, he seemed to openly dislike me. Oh well.

The quality of the company overall ended up being quite enjoyable, though, and I think that’s what counts the most. No one was remarkably schlubby or nebbishy, though the fresh babka was the biggest turn-on for me. Yum.

Tell us a little about the dinner. How was the food? How were the other chosen ladies?

The dinner itself was surprisingly comfortable. The guys cooked and served a delightful multi-course meal, the wine was flowing, and the people were funny and interesting. I was honestly shocked. I don’t have many Jewish friends and am not yet part of a Jewish community here in D.C., so it was refreshing to be around people with shared backgrounds and experiences.

And the other girls were lovely. We all engaged each other and it never felt like one of those catty reality shows where the women are competing for the men or vice-versa. Having gone into this half-expecting to be murdered by a serial killer (and yet I went, sigh) or be so bored that I’d try to gouge my eyeballs out with a Shabbat candle, I was pleasantly surprised. It’s not often that a bunch of guys cook, clean, and entertain a group of ladies completely of their own accord. Note to gentlemen everywhere: this should be done more often.

The evening was so “normal” in fact, that during dessert we joked that we needed to do something to spice it up, like perform an impromptu brit milah at the dinner table.

So, did you hit it off with any of the guys? Was your beshert at the dinner?

The dinner ended up lasting more than five hours, at which point us Jewesses all left together (we’re all still in touch and actually got another dinner party invitation—so, to be continued!). Interestingly, no phone numbers were exchanged across the genders at the actual event, though three of the girls were later contacted by three guys and are seeing each other again. Yentl the matchmaker would be so proud!

Personally, I did not find my beshert that night (and later met up with a French goy I’ve been casually dating…oops. My mother would be so disappointed). While I met some great people, my first foray into Jewish dating didn’t end up successful in the traditional sense. I guess it’s back to the land of the uncircumcised for me for now. Oy.

That weekend (after Shabbos ended, of course), I sent the guys an email thanking them for not being serial killers and for hosting a lovely evening, and they sent the chosen few a “shaynem dank” email:

Thank you for indulging our Shabbat fantasies. It was the ultimate double mitzvah. We had a great time hosting you, and may these experiences be fruitful and multiply. Never forget.

*Last name omitted so her mother never finds out.