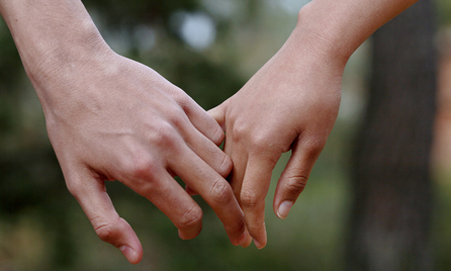 If I could choose my job title, I would be a Professional Conversation Starter. I want to start awkward conversations with Jews who are looking for an outlet to speak. I want to discuss the scary and judgment-filled topics that drive individuals in Jewish communities to silence. I want to talk … I want to talk about shomer negiah.

Shomer negiah literally means “guarding one’s touch.” It refers to the practice of refraining from physical contact with members of the opposite sex outside of marriage. It’s a choice reflecting the decision to reserve the intimacy of physical touch solely to be experienced with one’s spouse. The practice manifests itself in an incredible variety of ways for different people. Some individuals who define themselves as shomer negiah struggle with whether to shake the hand of an opposite-gendered professor or whether to give a friendly hug to an acquaintance at a party; others struggle with drawing the line between kissing and more intimate acts.

I have watched my fellow Jews navigate the delicate field of negiah observance throughout my life, but my interest in this institution and Jewish sexuality in general really started in college. I grew up attending Orthodox day schools, where the extent of my sex education was a single class in sixth grade during which a teacher told me that getting my period was my body’s way of practicing for childbirth. As a senior in high school, we girls were pulled aside for a week of classes about the laws of nidah while the boys had study hall. I entered Brandeis University a prototypical clueless, sheltered Jewish girl.

I applied to join an organization that provided counseling and educational programming about sexual health and sexuality. I was accepted and received a 70-hour crash course each fall on every aspect of sexuality, from birth control options to sex toys. The field quickly became my passion.

I taught educational programs to campus groups and first-year halls and held one-on-one counseling sessions in the office. My sophomore year, members of the Orthodox community began discussing relationships and sexuality with me when they learned that I’d grown up in an Orthodox community. I began holding workshops specifically geared toward Orthodox girls and answering their questions. These conversations and my workshops led me to realize that Orthodox girls wanted a venue where they could discuss negiah and how it impacts relationships, intimacy, and sexuality. Like me, they did not grow up with an outlet to discuss these topics in a safe, non-judgmental setting and clearly it was something they wanted to discuss.

Shomer negiah poses challenges for both women and men. Individuals interpret its exact boundaries differently, which can lead to judgment between friends about the legitimacy of others’ practices and choices. A friend once explained to me that she and her friend both wanted to discuss a change in how they practiced being shomer negiah, but neither one brought it up for fear that the other would judge them.

Inevitably, people’s shomer negiah statuses—the particular way they choose to practice, including how strict they are and from whom they permit touch—become known within their community. This means that, in addition to thinking about the personal implications of the practice, individuals must be prepared to respond to others’ assumptions about their level of general observance based on their shomer negiah status. A person can find his or herself judged for being “too” shomer, not shomer enough, or for making exceptions that are not to the judging party’s taste. Furthermore, members of an Orthodox community frequently keep tabs on one another’s shomer status as an important factor in choosing whom to date. Dating somebody who feels differently about the observance of negiah within a relationship can create questions and complications for otherwise-compatible couples.

All of these phenomena are evident just from sitting on the kosher side of Brandeis University’s dining hall. Upperclassmen scrutinize freshmen to ascertain their shomer negiah status. Opposite-sex friends give each other “shomer hugs” (a hugging motion that stops just short of contact). A table discusses whether the couple two tables over is “shomer” behind closed doors—the Orthodox equivalent, in some ways, of questioning whether a new couple is having sex, except that the judgment that accompanies it impacts a person’s social and religious status in the community.

The combination of my experiences as a student and a sex educator made me want to learn more. I floated the idea to friends of starting to collect people’s stories. I asked people who were shomer negiah if they thought it was a good idea, if they thought people would contribute, and if they thought it would be a helpful outlet to discuss these sensitive issues. The answer was a resounding yes.

So, I started The Shomer Chronicles. People either email stories to theshomerchronicles@gmail.com or submit them through an anonymous form on theshomerchronicles.com. I then post the stories on the website’s blog. I want to give people an outlet to speak to an audience that understands them. A contributing storyteller (who gave me permission to use her information), Jessica Kasmer-Jacobs, a master’s student in English Literature at NYU, explained the premise best when she said, “There has never before been an outlet where the readership understands the issues without having to preface the piece with, ‘Well, in Judaism we do this weird thing where we don’t touch each other until we’re married.’”

The stories have come from both girls and guys with ages ranging from 18 to 30. My biggest fear is that people will interpret my posting stories about people’s struggles as an effort to unilaterally discourage or bash the institution of shomer negiah. A friend, for example, asked me whether the site would be just a bunch of angry girls posting about how terrible shomer negiah is. That is not my goal. My goal is to give people an outlet to discuss their emotions openly and without judgment. I will not downplay people’s experiences or censor their stories to preserve a certain image of shomer negiah, or go out of my way to highlight negativity.

The stories illustrate the vulnerability and questions that come with being shomer negiah. One storyteller discussed the difficulty of explaining her decision to become shomer negiah, to her friends. “Almost instantly,” she wrote, “I noticed a change in our friendship—I was perceived as the naïve and innocent one. It was spread around, naturally, and while I was usually comfortable discussing it, I noticed that people began trying to talk me out of celibacy.”

Another wrote about the struggle to reconcile her beliefs with her desire for intimacy. She writes, “I lace my fingers through [your hair] until I reach the yarmulke at the top of your head and feel its threaded, circular edges. You wear it, like the others do, as a reminder of your duty to God. … Sinners, they call us? What kind of covenant am I breaking in loving a man of God?”

Sarah Epstein has been a practicing sex educator for the past four years. She is a 2011 graduate from Brandeis University, where she created workshops geared toward observant Jewish girls who want to learn more about their bodies and sexuality.