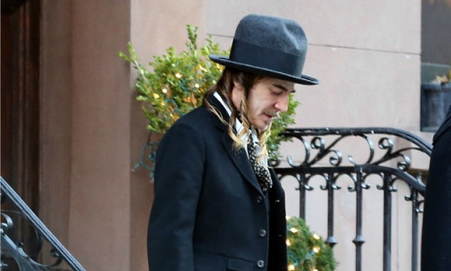 I’m apparently not the only one who thought his outfit seemed more deranged Willy Wonka than pious Hasid. The ADL stepped in, calling the Post story a “a ridiculous, absurd distortion.” According to ADL National Director Abraham H. Foxman:

There is no truth to their accusation that John Galliano was dressed in Hasidic garb, and anyone familiar with the dress of traditional Orthodox Jews should not mistake what Galliano is wearing in the photograph as “Hasidic garb.” Hasidim do not wear fedora hats, pinstripe pants, blue jackets or an ascot tie.

“He has spent hours with me and with others in the European Jewish community, including rabbis and Holocaust scholars, in an effort to better understand himself and to learn from his past mistakes. He is trying very hard to atone,” Foxman added.