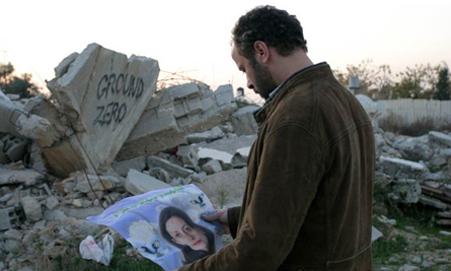 (A still from Ziad Doueiri’s new film, The Attack)

In Mao II, his novel of terrorism and art, Don DeLillo writes, “Nothing happens until it’s consumed.”

DeLillo could have easily said “processed” or “accepted,” but he uses the language of consumption because he knows how our post-terrorism media accounts are as much consumer products as healing narratives crafted for a traumatized culture. Meticulous reconstructions of the days before an attack sell papers; they also impart a sense of reality, making the once-surreal resolve into something real, albeit horrifying.

And so, in the two weeks since the Boston Marathon bombings, we’ve come to know an array of characters—boxers, teachers, estranged relatives, friends, a smoking companion or two—whose reminiscences and testimonies cohere into a story. The principal role is played by the Tsarnaevs of far-off Dagestan, who are asked, How could your children do this? The response is a tempest of denial, disgust, bafflement, a crosswind of parental furor. Anzor Tsarnaev says that his children couldn’t have committed such crimes, but he issues a tearful plea to his surviving son, “Tell police everything. Everything. Just be honest.” Zubeidat Tsarnaev is outraged, fists shaking, and says that her children have been framed. She tells the New York Times that she’ll never believe that her sons are guilty.

The Attack, the latest film from Lebanese director Ziad Doueiri, also enacts this macabre ritual. Based on the novel of the same name by Yasmina Khadra (the pen name of Algerian writer Mohammed Moulessehoul), the film examines the aftermath of a suicide bombing that kills 17 people in Tel Aviv. The bomber, it turns out, was Sihem Jaafari (Reymonde Amsellem), the wife of Amin Jaafari (Ali Suliman), a celebrated Arab-Israeli doctor living peaceably, and sumptuously, in Herzliya.

At once, Amin’s life is turned over. A secular Muslim married to a Christian Nazarene, his identity once represented a triumph of progressive coexistence; now it’s suspicious, with a Shin Bet agent saying, almost admiringly, “Fake seculars. Perfect cover.” Amin faints upon seeing his wife’s body, and when he awakes, he insists that she’s a victim, not the killer. His co-workers knowotherwise and no longer want much to do with him. He’s taken in for questioning, knocked around by the Shin Bet agent (played by a fearsome Uri Gavriel), and thrown into a dirty cell, klieg lights and metal records sending him (by design, of course) halfway to madness. Finally, he’s let out and eventually returns to his home—it’s been ransacked, a stroke of Hebrew graffiti declaring him a murderer.

As the film unfolds, one can only think that Amin will eventually come to accept his wife’s guilt. The remaining questions concern the form this realization will take—What will prompt it? Who will he blame? Will it be himself? Can he go on?

The second half of the film finds Amin in Nablus, where he probes relatives for answers and tries to confront a radical sheikh. A letter—enigmatic but its message clear enough; post-marked in Nablus, before the bombing, signed by Sihem—sends him there. Oscillating between grief and righteous anger, he finds his relatives pleased to see him but wary of his presence. He’s become prosperous but only by throwing his lot in with the oppressor. “Must be strange for you to live among them,” his teenage niece observes. (She can’t wait to emigrate.) Some wonder if he’s being followed by the Shin Bet, or even working for them.

Studying a terrorist’s radicalization—the disturbing how, the mysterious why—begins as reverse engineering and concludes as cryptography. The letter Sihem sends to Amin offers some clues; their discussions about having children awakened a political awareness in her, and she didn’t like what she saw in the country around her. But one of Amin’s relatives offers another answer, and a video of Sihem tearfully preparing for the attack still another. None of it is comprehensive or conclusive, least of all to Amin, who sinks deeper into grief and a vigilante’s anger. Even, perhaps especially, in death, his wife has become a stranger to him; her picture is distributed around Nablus on postcards, her face an emblem of someone else’s martyrdom. In one extraordinary nighttime scene, Amin stamps around Nablus and pulls down posters celebrating Sihem. His fingers scrape against plaster, and his rage is all the more palpable because it rides on the back of love.

The Tsarnaev brothers now exist mostly as media artifacts, part of an extended digital afterlife (Dzhokar will likely die in prison). Already they have their posters celebrating them—Tumblrs actually, run by an ersatz truth commission of teenagers who refuse to accept their guilt. Their social media accounts have become like Sihem’s letter, pregnant with symbolism and amenable to a spectrum of interpretation. But despite all this data, we return to some old verities: people are mysterious and contradictory; understanding is relative; horrific violence remains, in the end, maddeningly inscrutable. David Bernstein, a Russian emigre who sometimes took his car to Anzor Tsarnaev’s bodyshop, summarized it well. Speaking to The New Yorker’s David Remnick, he asked, “But who can say they know him, really?”

Perhaps Anzor and Zubeidat Tsarnaev will come to think the same about their own sons: that love doesn’t crowd out secrets; that, in some fundamental way, they didn’t know their own children.(Or, that they knew them quite well.) By the end of The Attack, Amin Jaafari ends up much in the same place. His story, however, has the consolation of being fiction.