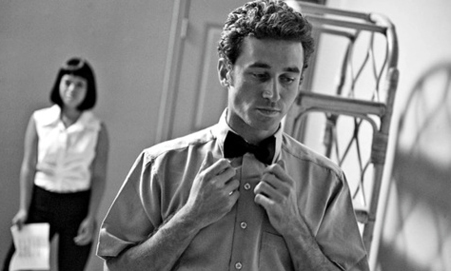 Of all of his varied, sometimes conflicting identities—soldier, novelist, New Journalist, proto-hipster, brawler, politician, director—Norman Mailer could never settle into the persona of the “nice Jewish boy.” In fact, he detested it, once writing, “The last thing I want to be in life is the nice Jewish boy from Brooklyn.” Many figures from Mailer’s life have cited this phrase, along with Mailer’s fear of appearing weak, timid, or self-censoring, as a justification for his bombastic behavior and his taste for violence. Friends and colleagues have also argued that it’s this very image of the nice Jewish boy—so dominant among mid-century American Jews and those who observed them—that contributed to Mailer’s ambivalent, if not rejectionist, attitude toward Judaism.

Mailer’s biographer Mary V. Dearborn writes that, at a young age, Norman was inspired by his father Barney, who combined an elegant South African manner with a tendency toward drinking, philandering, and gambling. It wasn’t that the behaviors themselves were admirable but rather the sort of identity they reflected: “Barney’s small acts of rebellion mirrored his own desires, and Norman felt heartened that he could escape the fate of the “nice Jewish boy” he had so long feared was to be his.”

Of course, in his long, heady life, Mailer often went too far in the other direction, at times displaying a brutish, callous character, particularly toward women. (In 1960, locked in a drunken argument with his wife Adele Morales Mailer, he pulled out a pen-knife and stabbed her.) And he may never have fully escaped the shadow of the nice Jewish boy—he was, after all, an exemplary student—in part because he couldn’t escape Jewishness itself. “He’s the prisoner of Jewish history,” Alfred Kazin said of Mailer, “and no matter how gifted you are, how courageous, you always feel you’re under wraps.” Kazin added, “So I understand it when I see him break against that restraint, only there’s also a positive side to being Jewish, which he hasn’t begun to acknowledge.”

We’re a long way from the kind of torturous battles over identity fought by Mailer and by Philip Roth, who, in works like Portnoy’s Complaint, pits the nice Jewish boy against his natural counterpart: the libidinous lapsed Jew with the raging id. The “nice Jewish boy” has ossified into a commonplace, alongside its “girl” counterpart. A decade ago, they made for presumptuously clever T-shirt slogans. Now the phrase is infantilizing, if not distancing and derogatory; it may even not mean anything at all. (It’s also far from its Yiddish antecedent, which carried a more expansive range of associations than simply “nice.”)

For a lot of commentators, this set of characteristics has proved alternately thrilling and baffling. Some of it comes back to Deen’s regular-guy looks—he’s 5’8″ and has the body of someone who jogs often but doesn’t try too hard—but also his Jewishness. A New York Observer profile of Deen carried the subhed “In defense of the not-so-nice Jewish boy.” Nightline wondered, “So how did Deen make his transition from a young Jewish kid growing up in SoCal, to a teen internet porn sensation?” (You can almost see where the writer highlighted “nice” and replaced it with “young.”) Wells Tower, writing in GQ, noted that Deen lost his virginity at Jewish summer camp—a site notorious for sexual misadventure among erstwhile nice Jewish adolescents. The GOOD article quotes a fan who says that Deen appeals to “her interest in ‘nerdy Jewish dudes’” and reminds her of guys from Hebrew school.

Deen is active in this shaping of his image, using his Jewishness as a metonym for likeable and unthreatening. The GOOD writer also noted that Deen “cracks Jew jokes” (at one point he refers to “my skinny little Jewish ass”), and he’s mentioned to a couple reporters that he’s “an over-analytical Jew.” His very NSFW blog—which is frattishly funny and genial but not very analytical—recently featured a post in which he exulted in getting free beers at a Vegas club: “this totally appealed to the jew in me.”

I have no problem with porn or with presenting James Deen as its most palatable public face. And perhaps, as Ellis and some of Deen’s other ardent boosters claim, he’ll use his acting skills, which make him the Brando of his current industry, to impressive effect in The Canyons. But for now, there’s a troubling way in which Deen’s Jewishness—his “nice Jewish boy”-ness—is used as a gloss to make him acceptable for public consumption. There’s a strange justificatory tone in the desire to explain it all, as well as an element of surprise: who knew that nebbishy Jews could fuck better than steroidal goyim? (Ron Jeremy, himself a failed actor, is sometimes ironically praised for being the stereotypical hirsute, soft-bellied Jew—another kind of sympathetic everyman, save his enormous member.)

It may seem incongruous to circle back to Mailer here, but why not. There’s much to dislike about the man, and he never seemed to find a useful accommodation with his Jewish background. But in his rejection of being a nice Jewish boy, Mailer did find the courage to forge his own distinct identity and, as a Jewish celebrity, represented a necessary counter-example to popular conceptions of Jewish weakness. That can’t be said for Deen, who doesn’t seem to have given these issues much thought at all. But then, neither have his journalistic admirers, who have yet to ask any questions beyond the obvious.