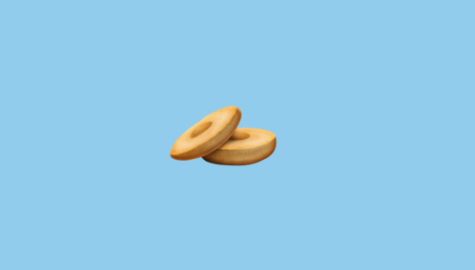 Have you heard the good news? Starting later this year, when you text your friends asking to go out for a bagel brunch, there will be a bagel emoji to help you emphasize your point.

Is the new icon the most robust looking of bagels? Well, no, as The Forward angrily points out. There’s nary a poppy nor sesame seed in sight, no cream cheese or lox spread, and the poor thing is thin, the kind you would get from a coffee chain, not your New York deli.

But the bagel has long been dead (long live the bagel). Just be grateful the emoji wasn’t a rainbow bagel monstrosity.

Besides, the bagel emoji is so versatile! You now have the perfect emoji for being bageled— that is, when a person realizes that you’re Jewish and makes a faux-casual comment at you that is really intended to communicate that they know you’re Jewish.

Another suggestion: Let’s make the bagel the new taco/peach emoji. Jewish ladies— you know what I’m talking about. The emoji even features two halves of a bagel lying together— it should be the main emojis for wlw.

So many possibilities! But this begs the question, now that we finally have a foothold in the emoji world (premium poorly rated add-on apps do not count), what Jewish symbols should come next?

Obvi, send us your own ideas for Jewish emojis, so that we can work towards a universal language of symbols that simultaneously speaks to a wide variety of cultures and also creates homogeneity as we gradually gravitate towards some kind of singularity, probably controlled by either Jeff Bezos or Elon Musk.