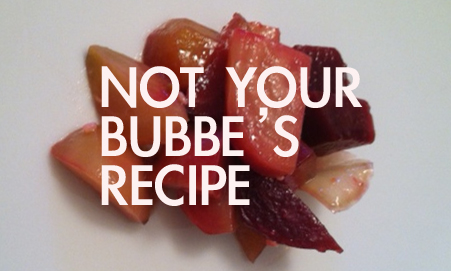 Borscht is a nasty sounding word. With five consonants crushed together at the end, it makes me think of a hearty sneeze or an irate Israeli telling her students to be quiet (shtok!). It’s also nasty by association—how many American-born Jews would say they find oddly bright-colored food appetizing?

In the last few decades, borscht has quietly slipped off the High Holiday menu, but it was once a crucial component of Jewish culinary influence in the United States. Like bagels and whitefish salad, borscht wasn’t associated with Jewish cuisine until throngs of Eastern European Jews arrived on Ellis Island and concentrated on the Lower East Side of Manhattan.

Initially, this iconic beet soup had nothing to do with beets. As it turns out, the word “borscht” comes from the Old Slavonic word “brsh,” which referred to a soup made of chunks of a white root vegetable. It was basically an “everything in the fridge” soup–bits of vegetables, bones, greens, and anything else lying around. It came from the cold northern regions of Europe, where meals were largely comprised of tough bread and starchy tubers. Gil Marks explains that peasants in this region used “sours”—pickles, sour cream, and borscht—to add flavor to their meals. Thought it might not have been known at the time, fermented foods like sours help boost the immune system and protect our bodies from invading organisms. When sweet, earthy beets became popular and began to dominate the soup’s ingredients, cooks started adding vinegar or fermented beet juice in order to keep the traditional sour flavor intact.

As borscht made its global journey, different bits were picked up or left off along the way. The Slavic version included meat, but the dish was almost always served with a dollop of sour cream, so Jews developed a vegetarian iteration. Since the vegetarian recipe was essentially beets and onions with vinegar and sour cream, the soup became a distinct pinkish purple color. Like its Eastern European cousin the blintz, by the time borscht had spent a few years in Manhattan it was being mass produced and sold in jars.

Here’s the thing, though: somewhere between borscht’s commercialization and the filming of Dirty Dancing, people stopped liking borscht. Maybe it was the jars or the sweetness from added sugar; either way, borscht somehow disappeared. But here we are in the 21st century and everyone loves beets (seriously: beets are so hot right now).

So I propose we take borscht back to its roots, no pun intended. Let’s celebrate the star of this show—the beet—by cooking it in season. A friend of mine has a small urban homestead here in Chicago, and last week she came by and dumped a bag full of pretty little white and pink beets into my very willing arms. These were some happy-looking beets, begging to be treated with love and respect. This salad is inspired by borscht, celebrating its many components with beets, pickled onions, and a little sprinkle of dairy on top. But unlike the smooth soup, the texture provided by the roughly chopped vegetables diminishes the creepiness of their color.

1. Bring a large pot of salted water to boil. Add beets and continue boiling until fork tender. Set aside to cool.

2. While the beets are boiling and cooling, place diced onions in a bowl and add salt, vinegar, and sugar. Place a plate or flat object in the bowl directly on top of the onions and put a weight on it. Let it sit for at least 20 minutes.

4. When the beets are cold or at room temperature and the onions are pickled, toss the beets and onions in a bowl with the dressing. Fold in the cheese (if using) and chives.

Not Your Bubbe’s Deconstructed Baba Ghanoush

Not Your Bubbe’s Pistachio Mandel Bread

Not Your Bubbe’s Savory Cranberry Crunch