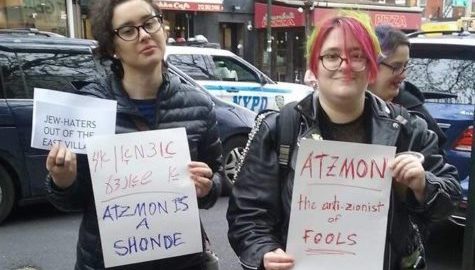 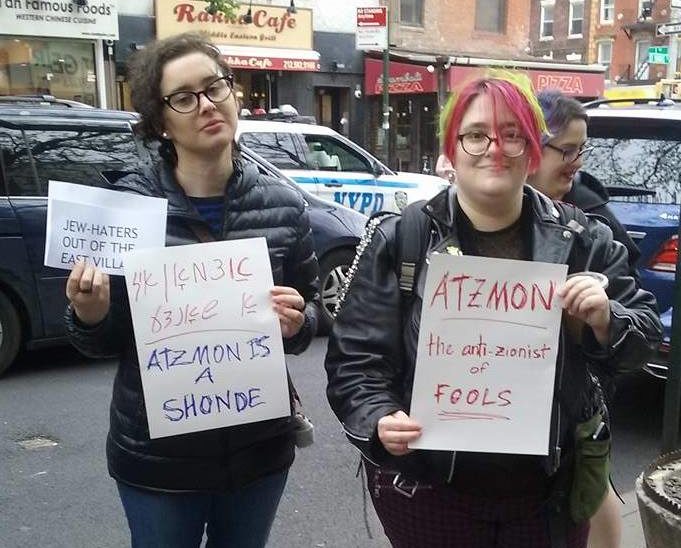 On Sunday night, April 30th, a little theater in Saint Marks Place hosted a rather unusual event: a panel, and a protest. At its height, the protest outside was no more than 20 people, with a core group of ten or so sticking it out long term, most of them Jewish.

The small, but spirited crowd merrily chanted at Gilad Atzmon, a provocateur who markets himself as an “ex-Jewish” pro-Palestine jazz musician, and is widely derided as anti-Semitic for his conspiratorial views concerning a shadowy Jewish global cabal, to “go kakken effen yam,” (a Yiddish pejorative phrase that means “go poop in the sea”). They came armed with leaflets describing Atzmon’s views and their reasons for protest, and engaged in fierce, but restrained debate with Atzmon and his supporters outside the venue. At one point, a supporter of Atzmon’s and an Orthodox Jewish protester were arguing about if Jews were a race or not.

“Unfortunately, I now have to consider Lorcan an ex-friend,” said protestor Bill Weinberg, holding a stack of fliers outside the theater venue. Weinberg had attempted to convince Theater 80 owner Lorcan Otway to disinvite Gilad Atzmon, to no avail. Protest organizer Eugene Onegin added, “Free speech doesn’t mean that the venue owner is exonerated from any and all responsibility from renting — and giving a platform to — a fascist.” The protest was as much against the theater owner as against the speaker. While no one accused Lorcan Otway of harboring anti-Semitic views, the anger at him for giving a platform to bigots was palpable, and it is clear that the protesters held him responsible for his part in aiding its dissemination.

As the protest outside dwindled, the crowd inside Theater 80 numbered about 65, with only small fluctuations throughout the evening. The event billed as a chance to hear Gilad Atzmon and his co-panelists give a talk. Flyers for the event said the discussion was to be about Brexit, the Middle East, and Trump, but Brexit never came up, Syria was only mentioned by one speaker, and Trump was used as a comparison to Archie Bunker. Instead, the panelists spent most of their time talking about Jews and their nefarious effects on society: Jewish power, Jewish identity, Jewish politics.

What happened here isn’t much different than what happened in September at the Brooklyn Commons, when a crowd of mostly Jewish leftists protested the inclusion of noted anti-Semite and 9-11 “truther” Christopher Bollyn was given a platform to speak by the Commons’ owner, Melissa Ennen. In fact, a number of faces from that protest also appeared at this one. This time, the bigot in question was Gilad Atzmon, but the defenses floated for his bigotry were the same.

Lorcan Otway, the theater owner, speaks and writes about the importance of free speech. Unlike Melissa Ennen, Otway is not a “truther,” not a conspiracy theorist, but like Ennen, Otway relies on an absurd interpretation of free speech to be about supporting platforms for bigots— and disdaining protest. At the event, panelist Stanley Cohen accused the protesters of wishing to “shut down free speech,” as if opposition to bigotry is an act of censorship. A supporter of Atzmon, who would only go by Bill, railed against the previous demonstration at the Brooklyn Commons, saying it was an infringement on free speech, defended his enmity towards “the Rothschilds” as “not anti-Semitic!,” and grudgingly admitted that this smaller protest was, perhaps, not a violation of Atzmon’s rights. In his Times of Israel blog, Otway supports the right to picket and protest, but elsewhere seems to raise the specter of calling the cops, and both in his piece and on Facebook, lists progressive events the theater has hosted, similar to how Ennen relied on her resume to bolster her own progressive credentials.

Atzmon’s anti-Semitism and attachment to conspiracy isn’t hard to find. His rap sheet is a long one, and his co-panelists, Stanley Cohen and Norton Mezvinsky have troubling histories of their own. Only Michael Lesher, an Orthodox Jew, comes with a non-political background, as he was a whistleblower about sexual abuse cover-ups in some Orthodox Jewish communities. Lesher’s take on Jewish identity wasn’t particularly earth-shattering, but his condemnations of abusive behavior, praiseworthy in another context, took on a conspiratorial air when presented in the context of an entire evening dedicated to the myth of “secret Jewish power.” The background of the panelists only seemed to prove that Jews are quite capable of being anti-Semitic.

In the lead up to the panel, Atzmon engaged with some of his detractors, and took seeming delight in egging them on using blatantly anti-Semitic stereotypes, such as referencing “shekels,” “the Jewish condition,” or even simply calling them “you people.” Apparently, two Jews are two too many, for he mixed up two organizers of the protest: Eugene Onegin, and Bill Weinberg, the (former) friend of Otway’s who tried to engage with him before taking further action.

Certainly, the online interaction left an impression on Atzmon, well throughout his panel appearance. No less than four times did Atzmon mention Weinberg by name, interspersed between assertions that he has “no problems with national socialism,” and that political correctness and identity politics, which “intellectually castrate” the people and divide the Left, is a creation of a “Jewish intelligentsia,” which “sees a value in dividing society.” Atzmon continued, “Jewish power, which we aren’t allowed to talk about, explains the link between Marx, Soros, the 100 Jewish landlords, Israeli criminality, AIPAC….and Bill Weinberg!” Stanley Cohen, meanwhile, explicitly urged the Left to “work with National Socialists, with Al-Qaeda,” in order to break away from a “narrow” and self-sabotaging Left. 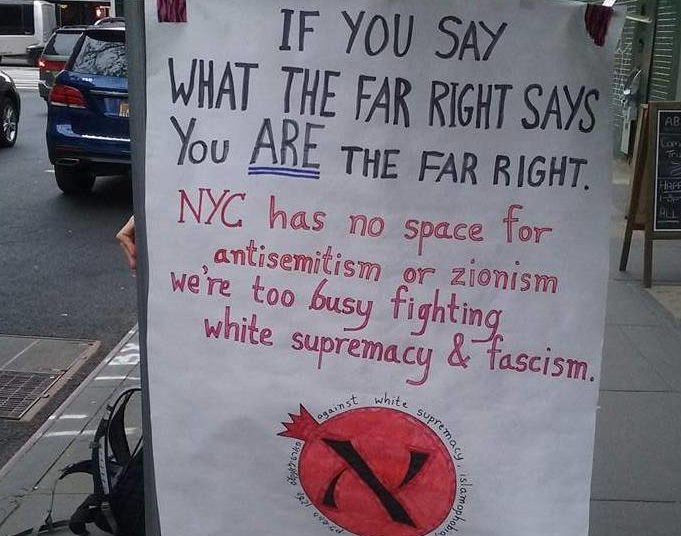 Melissa Ennen, Lorcan Otway, and Gilad Atzmon all claim to be members of the progressive left. Atzmon appeared at his panel wearing a pro-Palestine T-shirt, and before being wholly ejected by Palestinian activists for his anti-Semitism, had made for himself quite a name among far-left circles. Cohen and Mezvinsky also claim the “progressive” mantle, despite the former having offered legal aid to Hamas and Hezbollah operatives, and the latter having ties with white supremacists.

If you’re scratching your head at all this, you aren’t alone. Throughout the evening, much of what was said, when it wasn’t poorly organized word-salad, would sound at home in the mouths of the alt-right. Some of the audience members also embraced a jingoistic sort of nationalism, with one enthusiastically detailing to me his hopes of a closed border, and another asking the panelists “Is what’s going on in Syria a culmination of the Zionist policy and the Balfour Declaration?” But the panelists, the audience members, and those supporting them all described themselves as progressives — despite some troubling support from neo-Nazis and white supremacists, including David Duke.

While regressive-progressives of the likes of Ennen and Otway claim that speech must answer to speech, neither Bollyn nor Atzmon are willing to hear the concerns of their detractors, or those whom they aid in further marginalizing. And while Otway did not discourage a picket, the majority of the supporters of Bollyn and Atzmon are entirely unwilling to consider protest a form of speech, despite their enshrinement as such under the First Amendment.

In this twisted view of free speech, all speech must be consequence free, even the most harmful, dangerous, and bigoted of speech. Any permitted reaction must be parsed, neutered, and presented in a specific manner to render it toothless against the bigotry it seeks to counter. Ennen may not hate Jews, and Otway may not be party to conspiracy theories, but they doubtless bear responsibility for boosting the voices of bigots and attempting to scuttle challenges to the noxious views they espouse.

The key to cutting through this Gordian knot is understanding that anti-Semitism truly is the “socialism of fools,” and it functions as a social pathology and a conspiracy theory, and that will always assure its manifestation on either side of the political spectrum, right or left. In Trump’s America, that pathology has resurfaced, and its virulence appears both on the far-right and the far-left, who often crib vocabulary from each other to better propagate their ideals. It therefore is very likely that we will witness more and similar events over time, as ideas born on the far-right appear in discourse on the far-left. The far-right sees in the conspiracy mongering of the far-left an opportunity to recruit, make common cause, and inject their philosophy. When it comes to anti-Semitism, it seems they don’t have to work too hard.

Photo by B. Lana Guggenheim