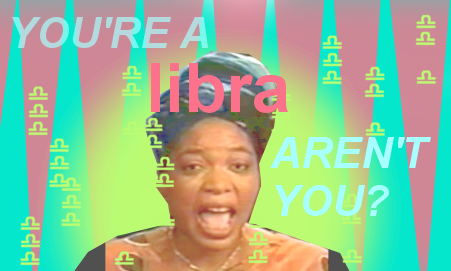 LIBRA (SEPTEMBER 21-OCTOBER 20): Di gantse velt shteyt oyf der shpits tsung: All the world is on the tip of the tongue.

You often find yourself wavering between pleasure and freedom, between yourself and others, believing you have to choose one over the other. But you can have it all, Lovely Libra! You are naturally idealistic and social, but there’s no need to go between the extremes. Slow your role, and you’ll find the balance you need to be satisfied.

Inspired by Venus, you lean toward idealism. Some say you are living in a fool’s paradise. While you don’t care what other people think and have a tendency to say controversial things, you are primarily devoted to maintaining order. People like you and want to be around you, even if you are the king of flakes—you’re so likable, easygoing, and charming that all is forgiven! Although civilized and full of wit, you love intrigue: you are self-indulgent and enjoy gossip and social scandal.

Ruled by the scales, Libra is the only inanimate sign of the zodiac. Your careful metallic measurements indicate that you often have to be cruel to be just. After all, you are the sign of law and justice. Although you are diplomatic and peaceable, on the flip side you are also indecisive, changeable, and do not take criticism very well, preferring to ignore the dark sides of yourself and others. Libras rule the kidneys, lower back and ovaries—Libras can often bring their physical bodies into equilibrium through sheer intuition.

The unstable full moon in Aries on September 30 could push you in any direction—the unpredictable nature of this moon could bring up some painful realizations. This could be a difficult time for you to avoid touchy subjects, so face them head on! Vos barist du? (What are you fooling around for?) The past three years have been particularly trying for you, but taskmaster Saturn will leave your sign in early October.

SCORPIO (OCTOBER 21-NOVEMBER 20): Every heart has secrets—Yedeh harts hot soides—but secrets have a way of getting out. The new moon in your sign on October 15 gives you a chance to start to accept that you don’t have a monopoly on control and power. It’s too easy for you to deny that any of this has a thing to do with you. Just remember: don’t do the crime if you can’t do the time.

SAGITTARIUS (NOVEMBER 21-DECEMBER 20): Your ruling planet Jupiter goes retrograde on October 4 until January 30, 2013. This is a good time to confront yourself head on—are you doing what you want to be doing or are you doing it for others? It might also be time to restore a relationship, or just reach out and touch someone!

CAPRICORN (DECEMBER 21-JANUARY 20): It’s great that you are striving for the highest peak on the mountain of life, but you may find yourself between a rock and a hard place if you don’t look where you’re going. Azoy vert dos kichel tzekrochen: That’s how the cookie crumbles! Don’t spend too much time worrying, but try your best not to ignore the lesson of looking before you leap.

AQUARIUS (JANUARY 21-FEBRUARY 20): You don’t need a weatherman to tell you which way the wind is blowing. It’s difficult for you to admit to yourself, but you are finally coming to terms with things that other people learned years ago. Don’t punish yourself (or that special someone) because you aren’t accustomed to emotional turmoil—embrace the drama. It’s in an essential part of life!

PISCES (FEBRUARY 21-MARCH 20): Your tendency to absorb the troubles and egos of those around you often causes you tsuris. What you love and what you hate may be one and the same, sweet Pisces. Your fish may swim in two opposite directions, but accepting this will allow you to give up some of your martyr complex.

ARIES (MARCH 21-APRIL 20): The energies of the new year will remain with you while you determine your next course of action. Aries are the pioneers of the Zodiac, concerned with the present moment. The full moon in your sign on September 30 encourages you to pay attention to consequences—you may be a rebel but it’s always better to have a cause.

TAURUS (APRIL 21- MAY 20): A new chapter in your life is opening—‘should I stay or should I go’ has been your mantra lately. One thing you must realize is that it doesn’t matter where you are, it’s really about grounding yourself and growing. You can lend yourself to others without giving up a thing.

GEMINI (MAY 21- JUNE 20): Your humor and natural curiosity is infectious, you crazy kochleffel (one who stirs up trouble; lit., a cooking ladle). But you’d be wise to check yourself before you wreck yourself: stop worrying about what others are up to and focus on your own journey of self-discovery.

CANCER (JUNE 21-JULY 20): Although Cancers err on the side of being apikoros (an unbeliever, a skeptic), even you have to recognize the fated nature of the maxim “good things come to those who wait.” You’ve been waiting long enough, haven’t you? Grab hold of it with both hands: its yours.

LEO (JULY 21-AUGUST 20): Out of sight, out of mind–Vayt fun di oygn, vayt fun hartsn—has never really been your thing. The more you try to ignore something, the harder it comes back at you. Rather than deny the fire radiating within you, embrace it and the creativity it inspires in you and others.

VIRGO (AUGUST 21-SEPTEMBER 20): Living for others has never been your strong suit. The sooner you embrace this rather than giving yourself a hard time, the better you will feel. You Virgos don’t do anything half way, and that includes focusing more on your own needs. Venus moving into Virgo until from October 2nd until the 28th confirms that it might do you some good to be a little selfish.