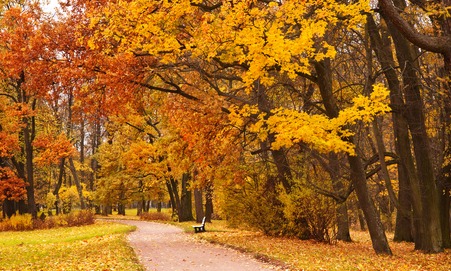 Naturally, the “Hebrew School Feeling” goes back to when I was in Hebrew school.

Hebrew school mirrored the light outside. During a fair amount of the year, class started when the sun was still out, and it ended after sunset.

For six years, I arrived to Hebrew school just before 4 p.m. The sun would shine as I walked through the doors. However, within minutes of starting class, it would get a little darker outside. Each time I would peer out the window it was even darker. Finally, when it was time to leave and I would walk outside, it was nighttime, and the moon was shining.

At the time, I was aware of the association between the light and Hebrew school, but I thought it was a characteristic of Hebrew school specifically. My memories of the light are vivid. I can place myself inside the classroom, and I know what it looks like outside. Each classroom had a different view, and I can still move between them.

But Hebrew school was more than just the light outside. I believe that attending Hebrew school is an essential part of growing up Jewish. I can pull up tons of memories ranging from which teachers I had to our class’ seder each year. There was always anticipation over who was going to get assigned which passage from the Haggadah. I loved when we got to nibble on raisins, figs, and dates—nature’s candy— on Tu B’Shevat. I even kept my final assignment— I’m hoping to use the questions from it someday at a dinner party.

So it makes sense that the “Hebrew School Feeling” I have is so strong that it came back to me several years later, when I began college.

During my first semester, I took Introduction to Psychology from 4 to 6 p.m, the same time that Hebrew school had been. The light would change during class just like it had before. The feeling rushed back to me.

I returned to the “Hebrew School Feeling” again when I started working after college. I would go into the office when it was sunny and leave when it was dark. I developed a habit of looking out the window every day after 3 p.m. and then looking again as it got darker. Just like back in Hebrew school when I used to look out the window.

Attending Hebrew school is a tradition. When you begin your Hebrew school education, you join an extensive roster of current and former students; a community. It’s going to have an impact. And, because of this, I am going to connect with Hebrew school throughout my life.

I love that I can find a little bit of Hebrew school after we set back the clock. I love that the sun setting at an hour earlier still holds meaning for me. Otherwise, it would just be darkness at 5 p.m. Hebrew school has given this change in light meaning.

Feel free to adopt the “Hebrew School Feeling.” It’s bigger than just me.