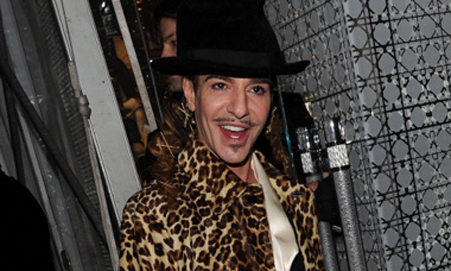 John Galliano is back in the fashion game, thanks to his old friend Oscar de la Renta. The much-maligned French designer, whose camera-ready drunk anti-Semitic outburst in March 2011 led to his swift dismissal from Christian Dior, a court hearing, and general public disgrace, will be heading to New York for a three-week stint working in de la Renta’s studio.

“Everyone in life deserves a second chance, especially someone as talented as John,” de la Renta told WWD.

And you know what? The Anti-Defamation League agrees, publicly supporting Galliano’s new internship. According to ADL National Director Abe Foxman,

We believe that individuals can change their hearts and minds as long as they demonstrate true contrition.

Mr. Galliano has worked arduously in changing his worldview and dedicated a significant amount of time to researching, reading, and learning about the evils of anti-Semitism and bigotry. Along his journey to recovery he met with us on numerous occasions. He has accepted full responsibility for his previous remarks and understands that hurtful comments have no place in our society.

We wish him much success and look forward to working with him again in the near future as a spokesman against anti-Semitism, intolerance and bigotry.

This calls for a mazel tov, or something.