It’s pretty standard for the networks to use all their heavy artillery during the Fall/early Winter months, and start throwing their b-team up after the new year.  But the TV battlefield has drastically changed, forcing network to stay on their game year-round.

Here’s why you’ve still reasons to yearn for that couch and put off finishing one of those big Jewish books for another day. For those who’ve never tuned in to Big Love because the premise didn’t seem like enough of a lure, you’ve missed out on one of the best shows on television.  Whether or not polygamy fascinates you, Big Love is worth watching more for the incredibly elaborate and fleshed out world that creators Mark Olsen and Will Scheffer have established within the show.  More interesting than polygamy in Big Love is the corruption that exists within the small splinter religion that most of the show’s characters belong to, corruption that mirrors many real life religious splinter groups.  Also, as we’ve said on Jewcy before, Big Love’s ensemble includes some of the most talented actors working on TV.  In fact, right now there’s only one other TV program that rivals Big Love in that regard, Breaking Bad, which doesn’t begin until July.  The subject TV show finales has been highly scrutinized in recent years, the finale’s of Six Feet Under, The Sopranos and The Wire have all made rather indelible marks, so it will be interesting to see if Big Love manages to do the same.  Lets just hope they find a new theme song/credits sequence or switch back to the old one.

When Parks and Recreation began, it was perceived with almost universal ambivalence.  At that point, almost the entire TV watching world had fallen in love with Amy Poehler and Human Giant fans were psyched that Aziz Ansari had a new vehicle.  But the show seemed like a poor spin off of The Office, and for a couple of episodes, it was.  Then, during Parks and Recreation’s Season 1 finale, everything clicked into place and people decided that the show at least deserved a second season.  Ever since, Parks and Recreation has been hitting a no, delivering a pitch perfect season of deadpan comedy while maintaining enough drama for us to care about the characters.  Aziz and Aubrey Plaza have continued to shine outside of the show, which will either help or hinder this next season and now with the addition of Party Down star, Adam Scott to the cast, the show is rife with heavy hitters. If they manage to keep up the momentum, Community will have a rival for TV’s best new comedy. 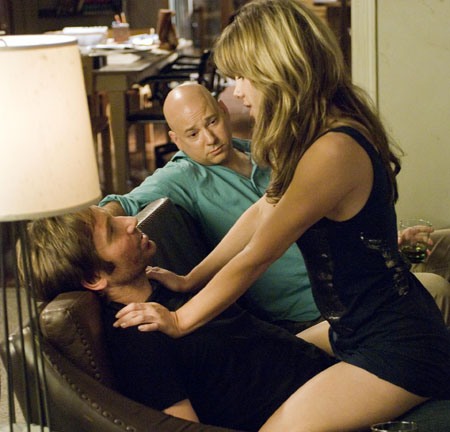 Ever have that moment where you’re watching a show  and it dawns on you what it is that you’re watching?  For instance, you’re in the middle of an episode of Entourage, watching the gang gorilla step their way into some fancy party and you realize, “This is just one big fantasy for assholes!”

I’d assume that by now, most people have figured out that Californication is exactly like Entourage in that regard, a fantasy, a mode for viewers to live vicariously through the show’s protagonist, only for dads.  Hank Moody with his survived hairline, shades and cool older guy boot shoes, can miraculously have sex with anybody without having to express his desires at all, it’s sort of like dreaming of owning a La-Z-Boy that turns into a toilet.  The show has become a veritable live action version of Maxim Magazine, showcasing every gorgeous young new Hollywood actress — most notably, the unforgettable Madeline Zima. As soon as we see an attractive woman on Californication, we know that she’ll soon be having sex with Hank. There’s got to be a drinking game here.

Generally, reality TV can be characterized as a guilty pleasure, but there is a certain brand of reality TV, a kind that makes no bones about what it is, so self-acceptingly gratuitous and miserable, that it can only be described as TV Crack.  Two of the year’s best batches of TV Crack are still to come.  Jersey Shore: a show that most people hate on principle, but some like because they don’t know any better and a select few enjoy because of it’s almost John Waters over-top-ness, started last night and will keep us warm and tan through months of cold Thursdays to come.

The Real Housewives of Beverly Hills is another of the awful, yet self aware reality shows, but this particular installment is special because of what we know is about to happen.  Camille is one of the housewives who, as the season begins, happens to be married to and completely enveloped by the life of Kelsey Grammar (you remember, tossed salads and scrambled eggs!)  However, in a bit a dramatic irony, we the viewer know that the couple splits during the course of the show, when Camille finds out that her husband has what Tony Soprano would call, a “goumar.”

Perhaps the best example of TV Crack is Oxygen’s Bad Girls Club, a show that puts both The Sopranos and Jerry Springer to shame with its gratuitous violence.  The brainchild of The Read World co creator, Jonathan Murray, this show is so self aware in how blatant it is, how lacking in any kind of theme or redeeming value it is, that it’s unrelentingly brilliant.  Bad Girls Club is merely a bunch of emotionally unstable women in a house, period.  Best of all, during the reunion shows, host Perez Hilton reserves the right to douse the girls with water or Silly String if they get out of line.  Think of it this way, if you’re going to rot your brain, don’t be half-assed about it.

More Excuses to Make a Mess Top Chef can be either fantastic, or dreck, depending on the season, the theme and the characters/contestants.  This season, Top Chef All Stars gives us chefs who almost won in past seasons of the show, making for some of the hungriest and most talented competitors thus far.  My pick for the show’s winner: Chef Richard Blais.

On the other end of the dial, Chopped continues to flourish as “the cooking show that could.”  The network behind Chopped isn’t quite as big and the challenger and competition isn’t as elaborate, but Chopped manages to put out a show that’s as entertaining, if not more so than Top Chef, by keeping it simple, and by casting interesting and quirky contestants to battle it out.  Just remember, both shows have better kitchens than you do, and people who get paid to clean up the mess.

Lastly, Storage Wars is a new show based on one of the most fascinating recent episodes of This American Life, which followed around people who buy neglected storage units.  It turns out that if you miss three months of rent, they sell your stuff, and there are people who make a hobby out of buying it up.  A lot of them get junk, stuff soaked in urine or gnawed at by rats, but some manage to nab new naked photo’s of Parris Hilton or abandoned cars.  Just remember, if you find your garage packed in a few months with stuff you bought at storage auctions, there’s a show A&E that might help you, it’s called Hoarders.

It's all Hebrew to me. Follow me on twitter at http://twitter.com/jonreiss and see more writing at http://jonreiss.tumblr.com

Drake-ing Bad: Where Drake is a Character on AMC’s Hit Show

In ‘Exodus,’ Christian Bale is Moses and Aaron Paul is Joshua