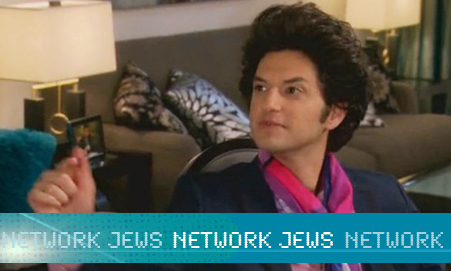 You know someone like him, this man-child, this feverish spouter of a thousand hare-brained schemes. He’s electric in all the wrong ways, projecting so much manic energy that he must have spent his childhood zapped on Pixy Sticks, which he only exchanged a few years ago for some off-brand Ritalin that he keeps in a bedazzled change purse. There was one of him at your high school, or summer camp, or on your Birthright trip, where a shitty trucker hat sat deliberately askew on his head and every statement, every mind-numbing boast and useless demonstration of ability, led to mass eye-rolling. Now, he drives a pre-owned Acura Legend and secretly works at Lady Foot Locker, but he aspires to so much more. You also know him as Jean-Ralphio Saperstein (Ben Schwartz) on Parks and Recreation, the distilled concentrate of every status-obsessed male JAP with dollar signs in his eyes, who thinks that club owner is a calling of the highest order and that he’s one lucky roll away from sitting courtside with Jay-Z and Beyoncé.

The occasional sidekick (and, naturally, business partner) of the slightly more composed Tom Haverford (Aziz Ansari), Jean-Ralphio has the approximate physique and metabolism of a pogo stick. He performs the most Krameresque entry into scenes since Kramer himself, except Jean-Ralphio filigrees his performances with absurdist raps. With his wild mop of thick black hair and his tendency to arrive unwelcome and in media res, he’s indeed part of the Kramer lineage, albeit filtered through the Jock Jams catalog.

Jean-Ralphio began as Tom’s brother-in-arms—or more accurately, his hype man—with the two collaborating on a near-toxic designer alcohol and, later, on an outlandishly extravagant production company called Entertainment 720. The particulars of these ventures don’t matter: they are ensured of their eventual, usually swift, failure. They are foolish plans, but they always have a brief, illusory moment of coruscating success, when the alcohol is flowing and the money is too—albeit, away from them—and it seems they must be on the cusp of something great. Of course, they aren’t, and they only aspire to the most superficial kind of success, to be rich and famous, surrounded by photoshopped women, their mansions loaded with garish designer clothing, men’s grooming products, and piles of Asian electronics. They have seen too many ’90s hip-hop music videos to have any other dreams.

My favorite Jean-Ralphio idea is one of his most fleeting. The “Li’l Sebastian” episode cold opens with Tom and Jean-Ralphio sitting in an office, throwing business ideas back and forth. (We later learn that Jean-Ralphio got a nice cash settlement from being run over by a Lexus. “I made my money the old fashioned way,” he says. He’s enormously proud.) Jean-Ralphio leans back confidently, as if he finally has hit upon the big one. He says:

This is for certain, okay? I create a game show … two people on stage, right? They flip a coin; one of them has to perform open-heart surgery, the other one has to receive open heart surgery. We call it: “Open Heart Surgery.”

All jokes lose something in the retelling, but this has all the Jean-Ralphio hallmarks: showbiz, a gauche manipulation of customers, a core idea that goes beyond impractical into the truly fantastical. Best is the look on his face when he tells it—his raised eyebrows and bugged-out eyes, his hands already arranging the contestants before him, all of it reflecting the absolute conviction that this is a great idea, this is the thing that’ll make them. For those few seconds, he believes it totally.

And with the same gale-force speed with which it appeared, it’s gone. Tom counters with a plan to buy G4 jets (“already interested,” Jean-Ralphio says), take the wheels off (“get ’em off of there”), and let people live inside. That too gives way, until they settle on Entertainment 720—which proves to be their most costly failure, wiping out Jean-Ralphio’s settlement from the car accident.

Failure is Jean-Ralphio’s metier. In many ways, he is a classic schlemiel, a bumbler who can’t do anything right. And he is undeniably a boor. But his outlandish behavior is coupled with an apple-cheeked earnestness that makes me wonder if he’s something of a holy fool. In the Christian tradition, a holy fool gives up everything to serve Jesus; he also acts insane, a deliberate put-on that conceals an inner perfection, for he has achieved the ascetic ideal. The Jewish Jean-Ralphio sacrifices everything to serve a different god: capitalism. His insanity conceals the ultimate uselessness of his sacrifice, which makes him an ironic figure—as every schlemiel is—but, strangely, also a blessed one.

Parks and Recreation is a sitcom, but it tends, like its progenitor, The Office, to braid its humor with heart and plot, the result being that characters must submit to pesky concepts like personal growth and self-examination. Tom Haverford eventually realized that, in order to reach his potential as a businessman, he had to cast off the ludicrously irresponsible Jean-Ralphio. The brotherhood fractured, and we’ve seen little of Jean-Ralphio in the latest season. (Schwartz is also busy playing an aggressive corporate management consultant on Showtime’s House of Lies. There’s some kinship between those two characters.)

This is all for the worse. Jean-Ralphio belongs on Parks and Rec not only because he’s a sheer joy to watch—Schwartz is a marvelously physical actor—but also because he’s a pure instantiation of the show’s original satiric impulse. He exists to make us lampoon everything he represents: love of money, social cachet, consumerism, all those high school-level desires that tend to stick around and become more amplified precisely when we’re supposed to age out of them. Without Jean-Ralphio, and with Tom neutered, Parks and Rec’s antic energy has been tamped down. The jokes are still solid, there are love stories to root for, but this is what it’s like when a show enters middle age. It leaves behind the mad energy of youth.